In this tutorial, we show you Angular 11 Http Client & Django Server example that uses Django to do CRUD with PostgreSQL (including finder method) and Angular 11 as front-end technology to make request and receive response.

With this system, we can use Angular Client to work with PostgreSQL Database via Django Server which has APIs:

The image below shows overview about Angular Components that we will create: 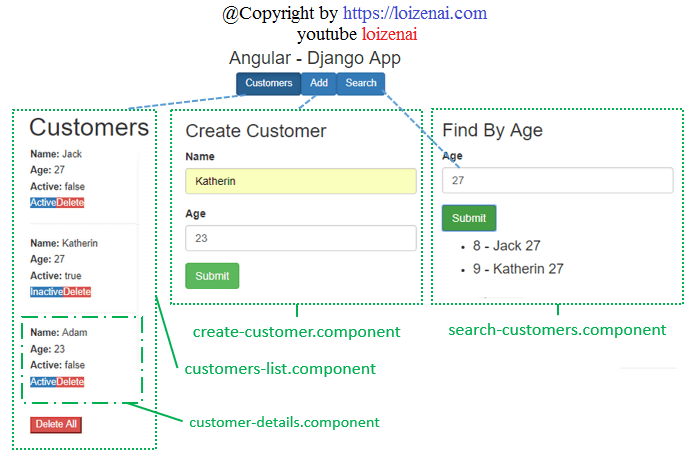 There are several folders and files in our Django project: 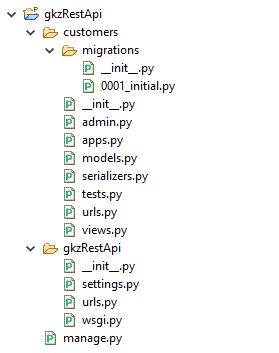 – customers/apps.py: declares CustomersConfig class (subclass of the django.apps.AppConfig) that represents our Django app and its configuration.
– gkzRestApi/settings.py: configures settings for the Django project, including INSTALLED_APPS list with Django REST framework and Customers Application.
– customers/models.py: defines Customer data model class (subclass of the django.db.models.Model).
– migrations/0001_initial.py: is generated by makemigrations command, includes the code to create the Customer model, will be run by migrate to generate PostgreSQL database table for Customer model.
– customers/serializers.py: declares CustomerSerializer class (subclass of rest_framework.serializers.ModelSerializer) for Customer instances to manage serialization to JSON and deserialization from JSON.
– customers/views.py: contains methods to process HTTP requests and produce HTTP responses (using CustomerSerializer).
– customers/urls.py: defines urlpatterns to be matched with request functions in the views.py.
– gkzRestApi/urls.py: defines root URL configurations that includes the URL patterns declared in customers/urls.py.

SafeStorageBot - keep’s your secrets in Telegram

Say No to NgModule in Angular 14!

Once suspended, ozenero will not be able to comment or publish posts until their suspension is removed.

Once unsuspended, ozenero will be able to comment and publish posts again.

Once unpublished, all posts by ozenero will become hidden and only accessible to themselves.

If ozenero is not suspended, they can still re-publish their posts from their dashboard.

Once unpublished, this post will become invisible to the public and only accessible to ozenero.com.

Thanks for keeping DEV Community safe. Here is what you can do to flag ozenero:

Unflagging ozenero will restore default visibility to their posts.