This post walks through the process of combining Storybook, Cypress and Jest code coverage, and an explanation of why you may want to do this. The full code is available on GitHub.

Knowing how much and what parts of your code base are covered by some form of test can help direct future testing effort. Using tools such as Codecov can inform reviewers whether a pull request would increase or decrease overall test coverage - serving as a reminder for the reviewer to check that appropriate tests have been written when adding new features or fixing bugs.

However, you may have different types of test each running in a different system, so code coverage metrics from one type of test alone may not provide sufficient information.

Picking the right type of test depends on the type of code, you are testing:

Code that consists of a router and connecting to an API may be best tested with integration tests against a mock or prerecorded API e.g. using Cypress, Selenium.

A sample application may be laid out as follows:

In such a pattern, you may want to set a few target code coverage metrics, e.g.:

I have created a sample project that shows the following:

Getting code coverage for Cypress tests in a create-react-app application requires the following libraries:

In order to scaffold a Cypress project with some basic config and tests, I used @bahmutov/cly, and referred to the following blog posts:

And as per the @cypress/code-coverage setup instructions, did the following:

In order to automatically start the application when the Cypress tests are run I used the following library:

@cypress/instrument-cra doesn't collect metadata for files that aren't loaded by webpack. I work around this by running a fake test to create an initial file at .nyc_output/out.json before running the Cypress tests.

I added the fake test in the project root in a file called 'fake.test.js':

This test is used by the (slightly convoluted) "coverage:init" test below. It allows us to run create-react-app's code coverage script, but with zero coverage, producing a json file that contains code coverage metadata with no actual coverage. I'll be honest, there's probably a neater way to do this.

The following nyc settings were added to package.json:

Along with the following scripts (note the change to the default start script):

Which results in the following: 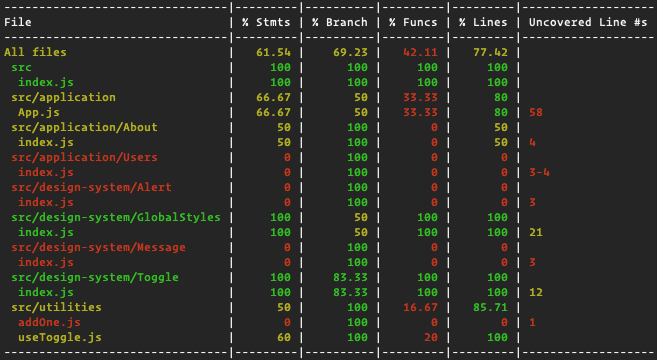 I can then dig in to these metrics in more detail by opening the lcov report at coverage/integration/lcov-report/index.html. 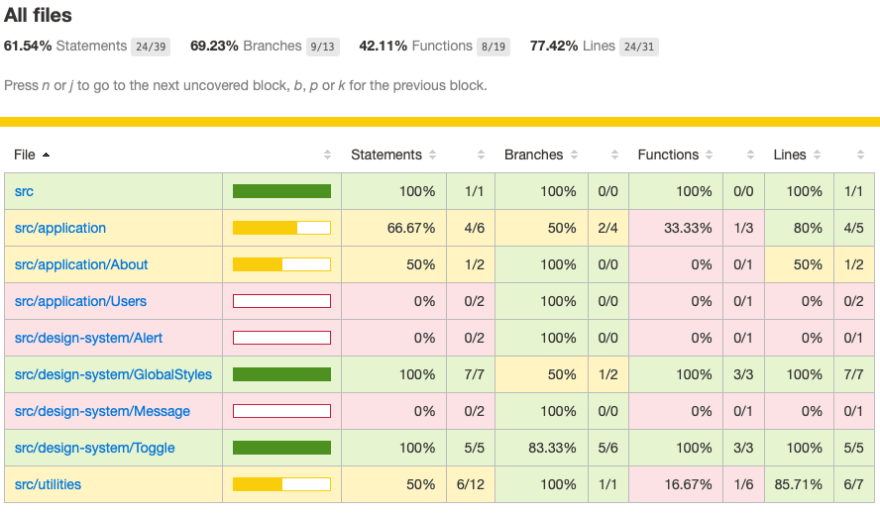 Browsing to src/application/App.js in the report I can see the uncovered branches (yellow) and lines (red): 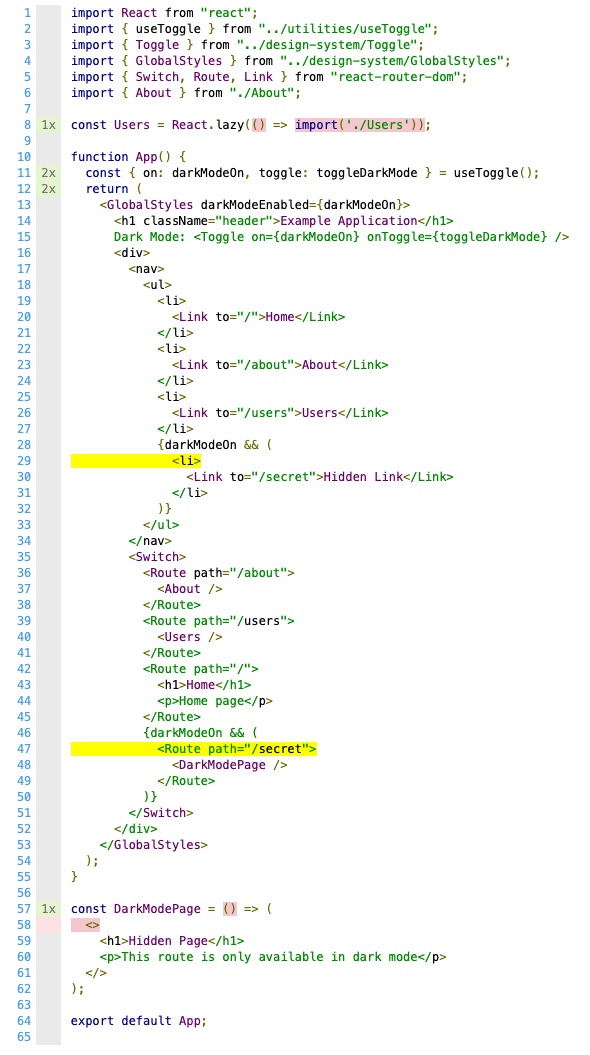 In order to extract code coverage from storybook, I used @storybook/addon-storyshots to generate Jest snapshots. The snapshots are created each time and not compared to existing snapshots. They're not used to track changes, only as a hook in to Jest to collect coverage.

Storyshots was set up as described in the documentation, with the addition of using 'renderOnly' so that we don't save snapshots to disk.

Then the following script was added to package.json:

When you run this script you should see something like this: 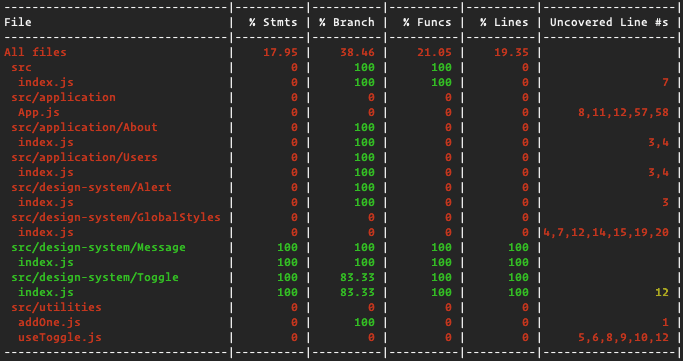 Again I can view the lcov report (coverage/visual-regression/lcov-report/index.html) for more detail: 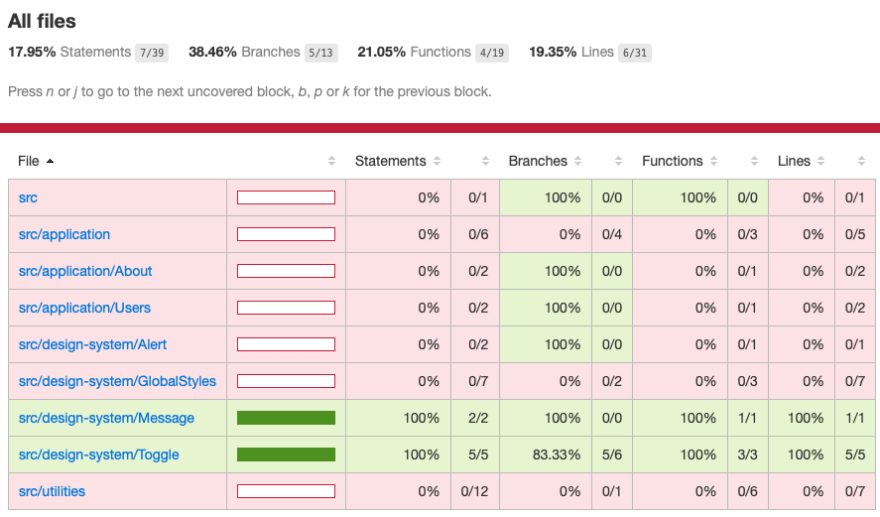 This is fairly simple as it mainly uses what create-react-app gives you out of the box - though there is a bug in create-react-app@3.4.1 that prevents this from working so best to stick to 3.4.0 for now.

Some minor tweaks are needed:

When you run this script you should see something like this: 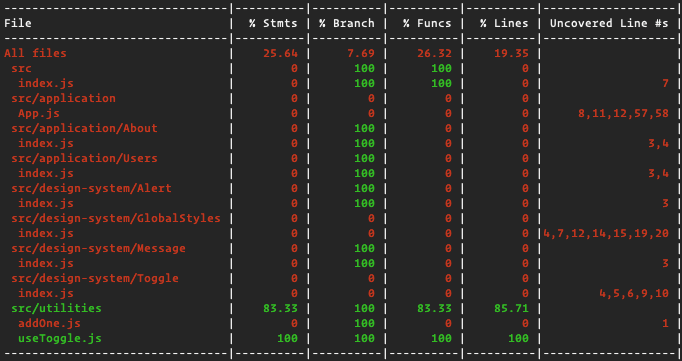 I recommend using Codecov which can merge reports for you and post metrics as a comment on pull requests - however in this example I was looking for something that I could run locally to produce a combined report.

I used istanbul-merge to produce a combined report, using the following scripts in package.json:

On running yarn coverage I now get all of the above plus the following merged report: 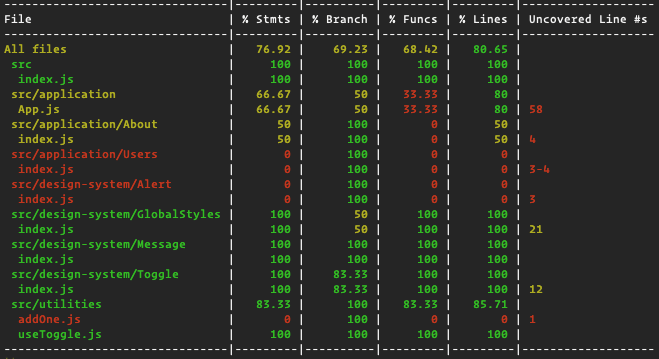 Now that I have this report, I can look for areas of concern.

For example, it seems odd to me that even after running all unit, visual regression and unit tests, I still don't have 100% coverage on GlobalStyles.

I can dig in to the lcov report to discover why: 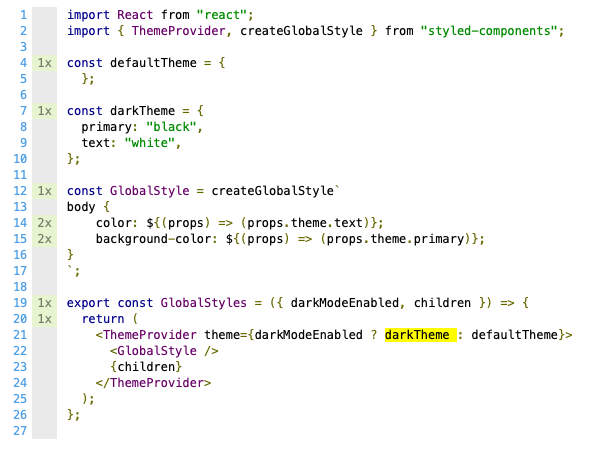 I have no tests for dark mode! 😢

Alasdair McLeay
React Consultant
Things you can do with your Browser developer console
#webdev #javascript #debug #programming
15,000 GH stars in a year: how we did it 🤩
#opensource #career #devjournal #programming
The perfect open-sourcer does not exist
#opensource #beginners #github #productivity

Once suspended, penx will not be able to comment or publish posts until their suspension is removed.

Once unsuspended, penx will be able to comment and publish posts again.

Once unpublished, all posts by penx will become hidden and only accessible to themselves.

If penx is not suspended, they can still re-publish their posts from their dashboard.

Once unpublished, this post will become invisible to the public and only accessible to Alasdair McLeay.

Thanks for keeping DEV Community 👩‍💻👨‍💻 safe. Here is what you can do to flag penx:

Unflagging penx will restore default visibility to their posts.