I have been tackling the Udacity React Nanodegree, for a few different reason progressive growth at my work, and also I love to learn!

I finished the first part of the nanodegree a few days ago and decided to give an indepth review of what is covered, what you learn, how the teach it and what is completed by the end of it.

What do I do currently and why should you listen to me?

I have been a developer for almost 12 years for many large companies, freelanced and worked for startups. I also create content for Youtube, livestream and Twitch and create courses.

I have been writing React for quite a few years and focusing mostly on NextJS and React Native.

What do you need to know before starting?

To get started, if you are looking at this review you are probably wondering what are the minimum requirements to start this nanodegree? The minimum in my opinion is:

To succeed in this program, you need to have experience with building front-end web applications with:

You should have familiarity with the following:

What is covered in part one?

Part one is about React fundamentals and covers the following topics which I will go into more depth:

Each one is covered in multiple sections that break down important concepts and make sure that you understand the concept before building on top of the concept.

The why React section is an in depth introduction into React and what makes React different compared to say Javascript, Angular or Ember and their core principles.

To Begin with they describe the Compositonal model, which is why React is so powerful, if you are unfamilar with concept this is combining simple functions to create complex function. Here is an example of a function that is not compositon.

As you can see we just break out the function into two smaller DOT (Do one thing) functions and call them from another.

The Udacity team than relates Composition to React by describing how React builds small pieces of the UI using components. If you have interactive with React you know how important they are but they dig further into them later on.

They use an example where you have a page and two components called Article and Sidebar obviously this might be a bit confusing if you never used components before.

Udacity covers the Declarative code versus Imperative code. For example Javascript is imperative meaning we tell Javascript exactly what we want it done for example:

We have to give Javascript commands to:

React on the other handle is declarative because we write the code that we want, and React is in charge of taking our declared code and performing all of the JavaScript/DOM steps to get us to our desired result.

React is unidirectional with it's data flow which means it flows one way from parent to the children. Udacity compares this how data bindings worked prior, where any part of an application code update code which could cause issue.

They also compare this to both Angular and Ember where two way bindings is a thing, so you can keep your data in sync no matter where its updated. Personally I also though Angular was powerful for this but it makes it hard to knwo where the data is being updated when an application becomes bigger. 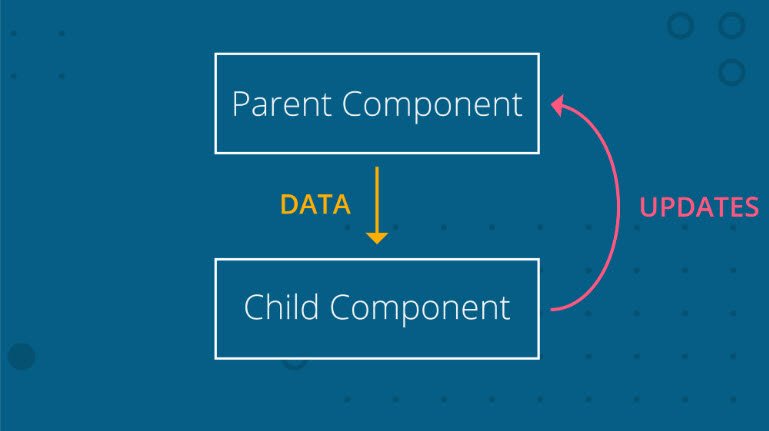 So throughout the course quizzes are used to make sure you understand the concepts as they are taught, so at this point Udacity asks a few multiple choice questions on the concept of data flows.

The final section describes how React is just Javascript that builds on top of the functional programming and ES6 syntax. This whole section goes over the concepts of map() , filter() and using map and filter together. This section uses the built in cloud code to practice these functions but only covers a couple of examples which was a bit of a let down.

It is important that you understand both .map and .filter and should practice them a few times before moving out to section 2.

Now the real work begins, the Udacity team start to walk you through how to render React elements with more practical concepts versus theory.

You now get introduced to the react.element functionality and reactDOM and show how easy it is to create a HTML elements using React. Each video builds upon the next, starting with a simple

and building all the way up to creating a list using .map() that you learnt in prevouly lessons, by the end of the first section before moving on to components you will create the following:


This might look simple but is a great introduction into rendering the DOM and using .map() to iterate content.

Now that you have learnt the basics of DOM rendering, Udacity makes a small introduction into components. They take the original code I showed above into a React component:

Up next they introduced Create React app which most people know about probably due to the React landing page talks about how easy it is to get a full working single page app working in "minutes". They simply explain how:

This section does a few things, first it shows you how components work and how simple they are used to implement using React. They then describe how components encourage us to build applications using composition instead of inheritance. Those two principles are

Finally they talk about how you should "favor composition over inhertiance" by explaining how React uses composition to build user interfaces. We extend React.Component, but we never extend it more than once. Instead of extending base components to add more UI or behavior, we compose elements in different ways using nesting and props.

The state management section of the React fundamentals course covers the following concepts:

This is the first time you build an actual application, well sort of, they provide boilerplate code for both the server and client side code. By the end of the section you will of built a contacts application that:

The app will also have a search bar that will allow you to filter the contacts or reset the the state to show all contacts.

It will also allow you to remove a contact and add a contact by entering a name, handle, and uploading an image.

This section is very detailed and long and focusing on creating the application which doesn't get finished until the end of the section as we need React Router! It goes in depth on how to pass data around, updating components, updating state and controlled components.

On top of creating the contacts application, there are two exercises that cover passing data. I was a bit disappointed in these two exercises for a couple of reasons:

This section is the longest and could probably be more effective if they chopped it down into two sections. One to create the application and on to cover the exercises about passing data.

Now that you learnt about local state which means you can load data from a variable without the need of databases.

The final section before you attempt to build your application that you submit for grading is about React Router. React Router is a way to create Single Page Applications.

By the end of the the contacts application you started will be finished and you will have learnt how to use the Route component, and the Link component. There are plenty of quizzes to complete and exercises that reinforce them.

The final project they as you to create a React application from scratch and utilize React components to manage the user interface. You’ll create a virtual bookcase to store your books and track what you're reading. Using the provided Books API, you’ll search for books and add them to a bookshelf as a React component. Use React's setState to build the functionality to move books from one shelf to another.

Would I recommend based upon section one?

So after finishing the first section of the course, I would certainly recommend the Nanodegree. They do a great job of building on each concept you learn and at a reasonable pace so that you won't feel overwhelmed.

Setup Webpack And Babel for a React JS Application