Have you been wondering about what exactly is the difference between a stateless and a stateful widget?

Widgets are the UI building blocks in Flutter. Everything that you see in a Flutter application is a widget. The entire Flutter Application is itself a widget.

Let's dive deeper into both the types and later discuss the differences.

Let's start by creating a new widget to get a better understanding of these concepts.

We will create a Tips Widget which will display a list of tips for programmers to view. 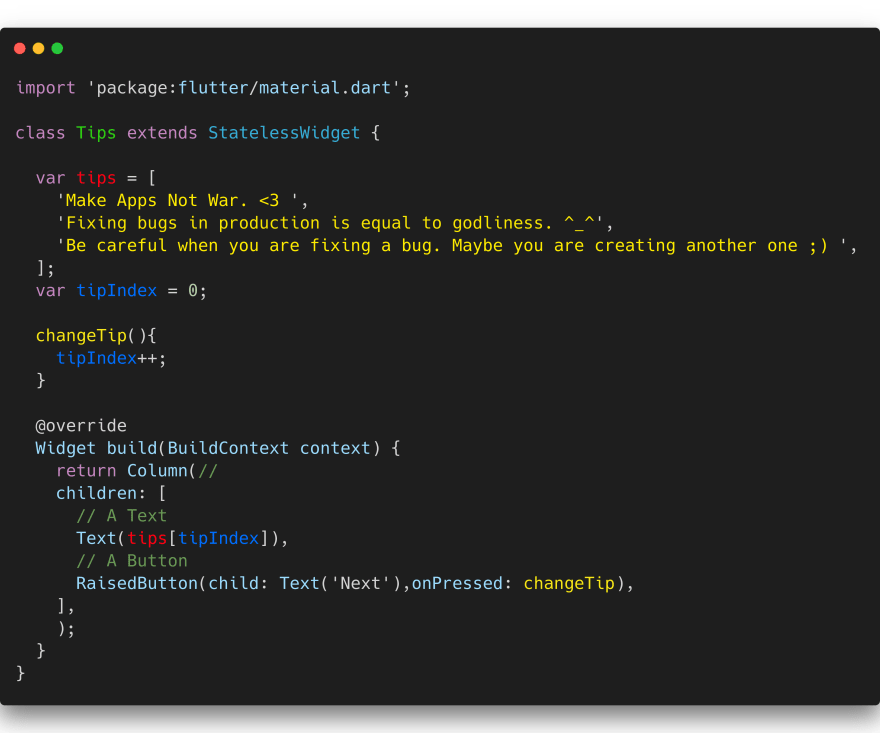 Let's embed this widget in our main.dart file. 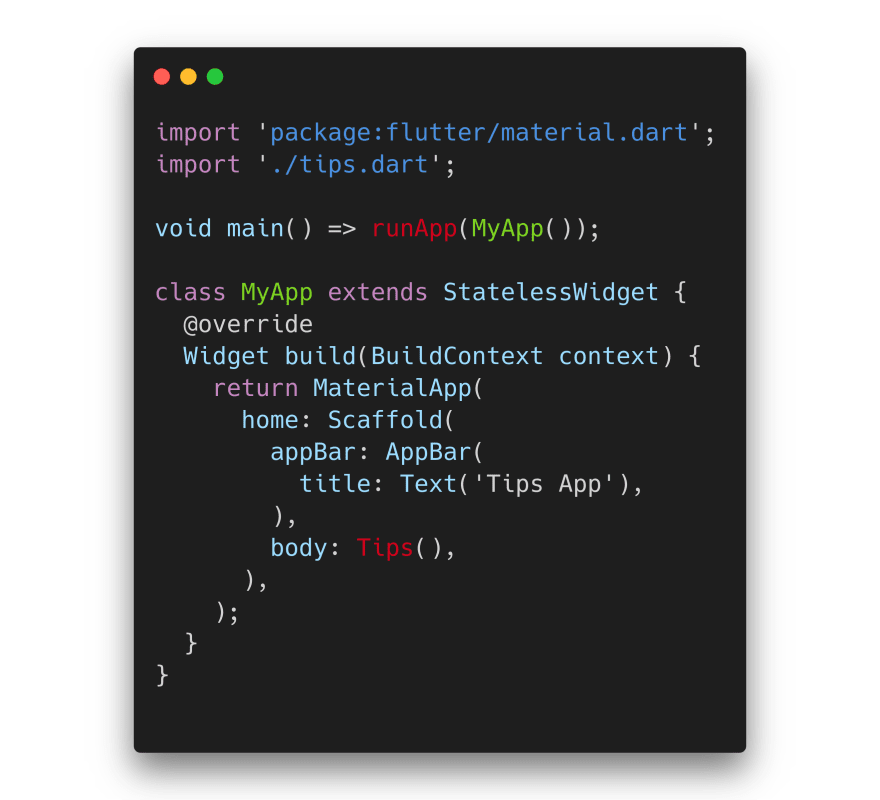 Now in this case after clicking the Next button, the tipIndex must increment and thus the next tip at the index position 1 should be rendered.

Because our widget is a stateless widget as it extends the class StatelessWidget.

The only way a stateless widget can get re-rendered is by passing EXTERNAL DATA which we will talk about after understanding Stateful Widgets.

These type of widgets do have their own internal states.

We will convert our stateless tips widget into a stateful one for more understanding. 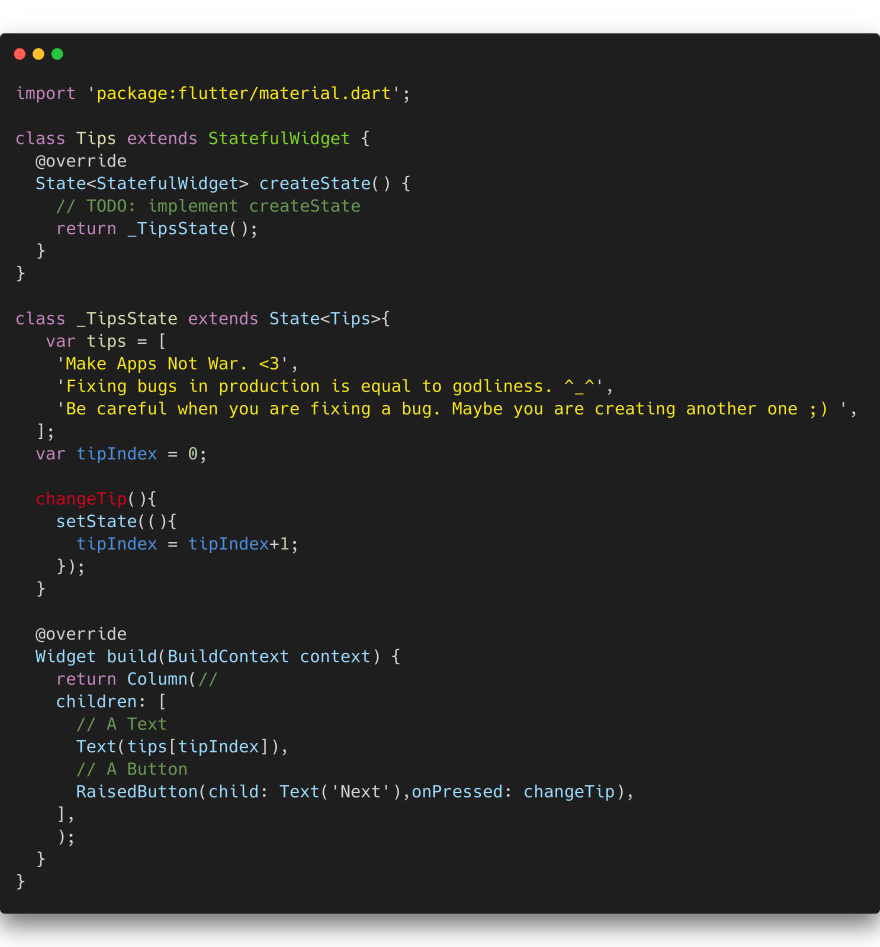 Note the following to understand the conversion from stateless to stateful:

The above are the three essential changes required to convert a stateless widget to a stateful widget.

After Clicking the next button 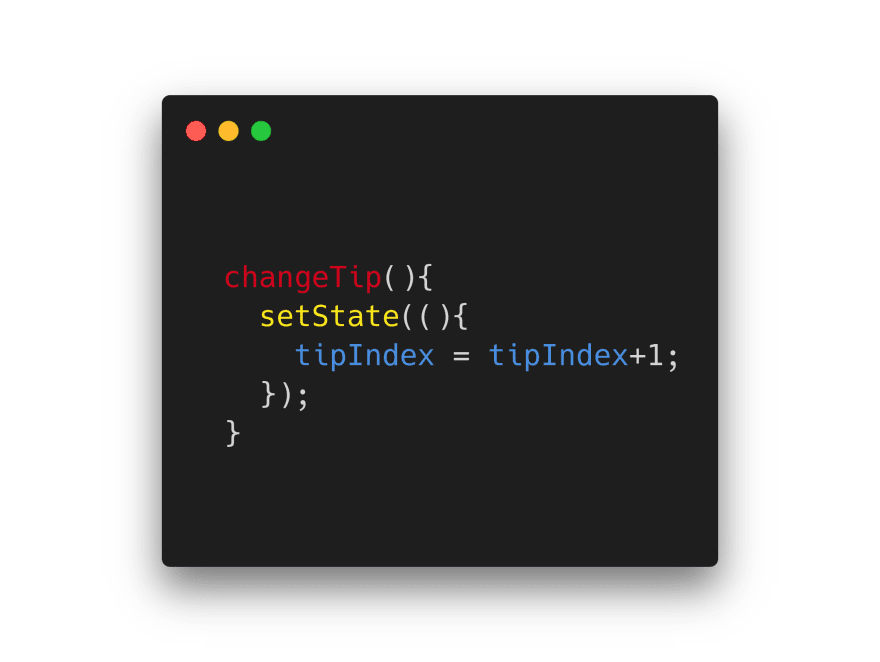 setState() is a special function only available in Stateful Widgets which updates the state of the widget and re-renders the components that are affected by the change in state.

In our case, only the Text() which displays the tip is re-rendered because only that widget is associated with the change in tipIndex.

EXTERNAL DATA is the data provided to a widget through its constructor.

Now it's time we split our Tips Widget into two parts:

Tips will contain the top-level logic. The list of tips and the functions to handle the state change will be in this part. [This is a stateful widget]

This concept is similar to LIFTING THE STATE UP used in web frameworks.

Let us understand how a stateless widget can get-rendered. 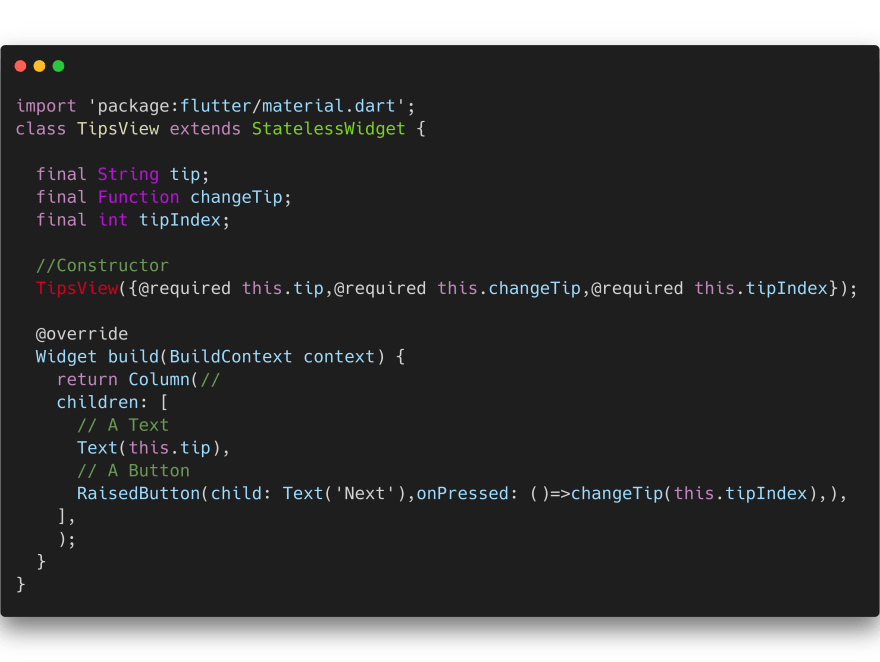 TipsView is a stateless widget which has a constructor which takes 3 parameters tip, changeTip and tipIndex 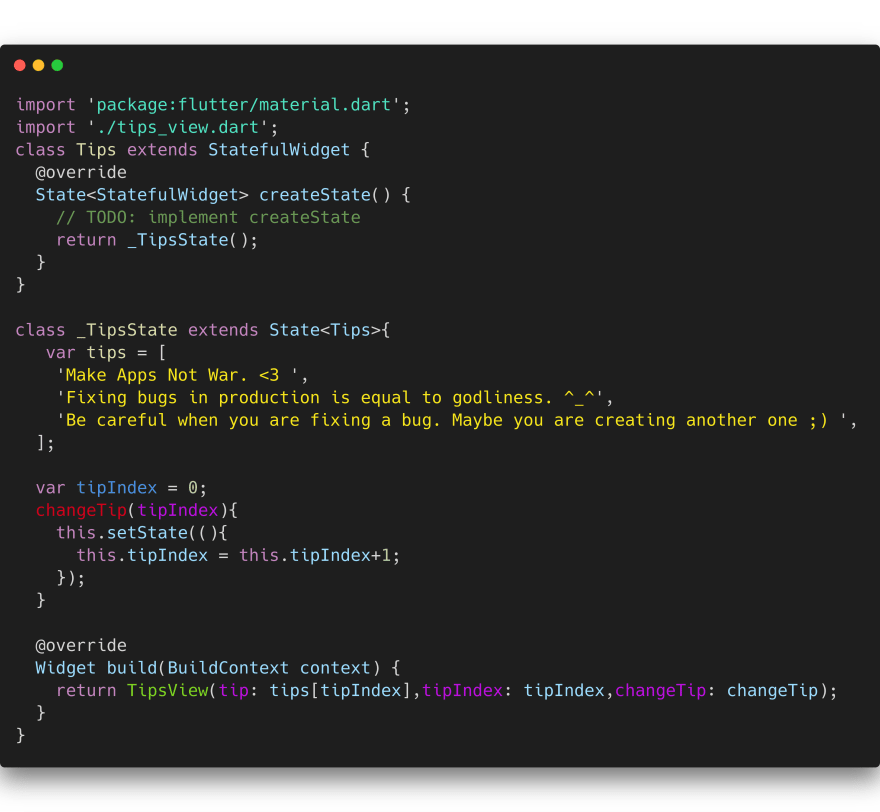 This is the top-level widget which renders the TipsView and passes down the parameters tip, tipIndex and pointer to the changeTip function.

Even after splitting the application it will still have the same functional result.

So this is the use-case which shows re-rendering of stateless widgets.

Differences Between Stateless and Stateful Widgets

Thank you for reading this article 💖.

Once suspended, pika1998 will not be able to comment or publish posts until their suspension is removed.

Once unsuspended, pika1998 will be able to comment and publish posts again.

Once unpublished, all posts by pika1998 will become hidden and only accessible to themselves.

If pika1998 is not suspended, they can still re-publish their posts from their dashboard.