An unprecedented heat wave rocked the Pacific Northwest in June. Oregon turned into an oven. This gave me yet another reason to break out a Raspberry Pi and collect some data. I sent it to Adafruit because it remains one of the greatest places to send and look at IoT data. 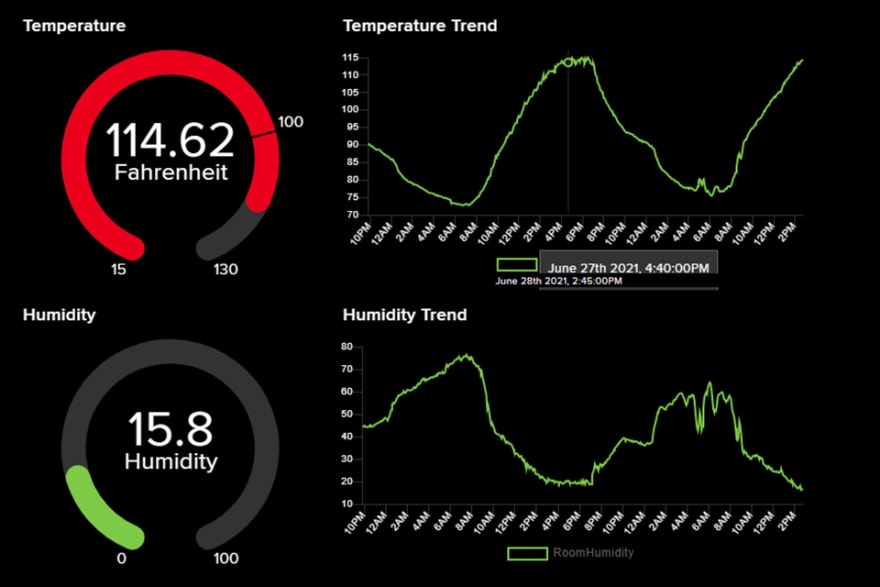 During the first day I placed a Raspberry Pi under my deck to collect and send temperature and humidity data. 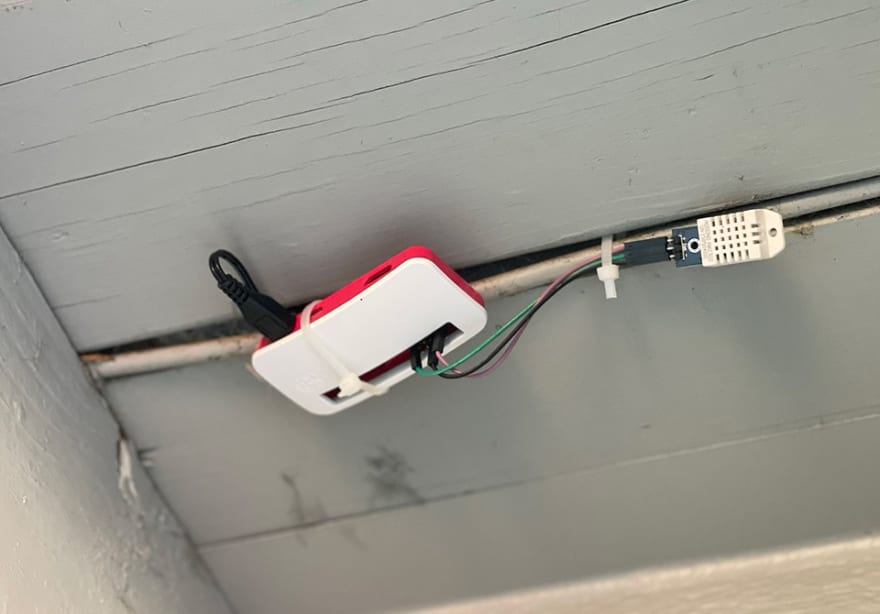 I wanted to get ambient air temperature as accurately as possible. I placed the Raspberry Pi (Zero) under the deck so it wouldn't be in direct sunlight. It's in shade 24/7. The breeze is blocked by joists.

Then my son had an incredible idea:

Great! So I set up a 2nd Raspberry Pi for that purpose. I put it in the center console of our Ford Focus. I didn't want that one in direct sunlight either. The car itself was in direct sunlight the entire time. I parked it in an area where it didn't receive shade.

I cracked open each window about 2 inches: 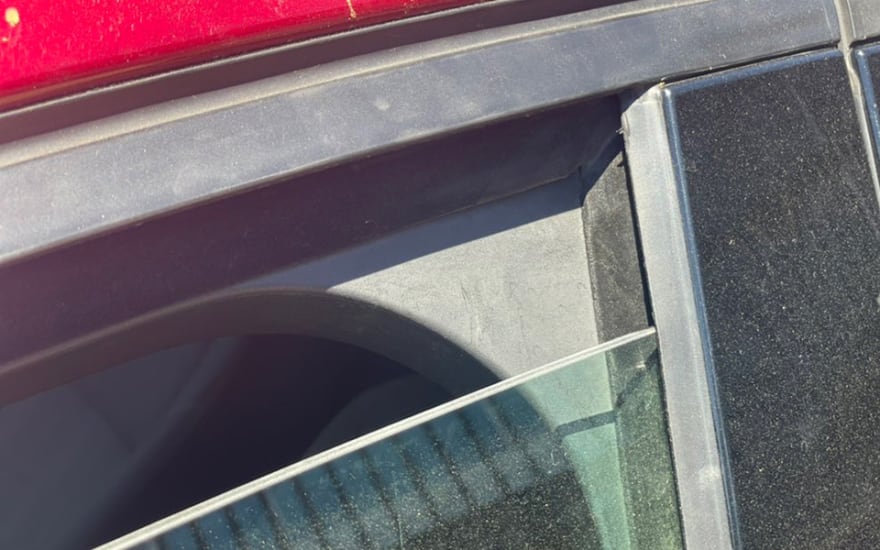 Then measured the results over a few days.

In this article, I'll show you how we built this setup, and the data I found.

Step 1: Setting up the Raspberry Pis

To gather and send this data, I used two Raspberry Pis set up identically.

Under the Deck (Outside Temperature) 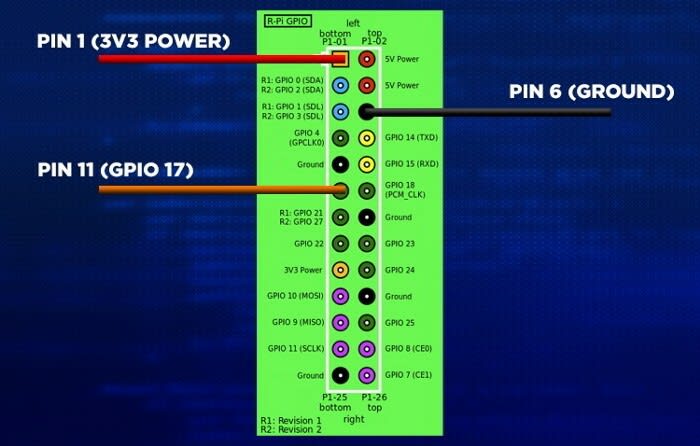 They were both set up with these instructions if you'd like to try it yourself.

I even did a live stream when I set up the pi in the car if you want to see it in action.

I sent the data to Adafruit and let it collect data for a few days. Adafruit gave me some nice realtime graphs to look at: 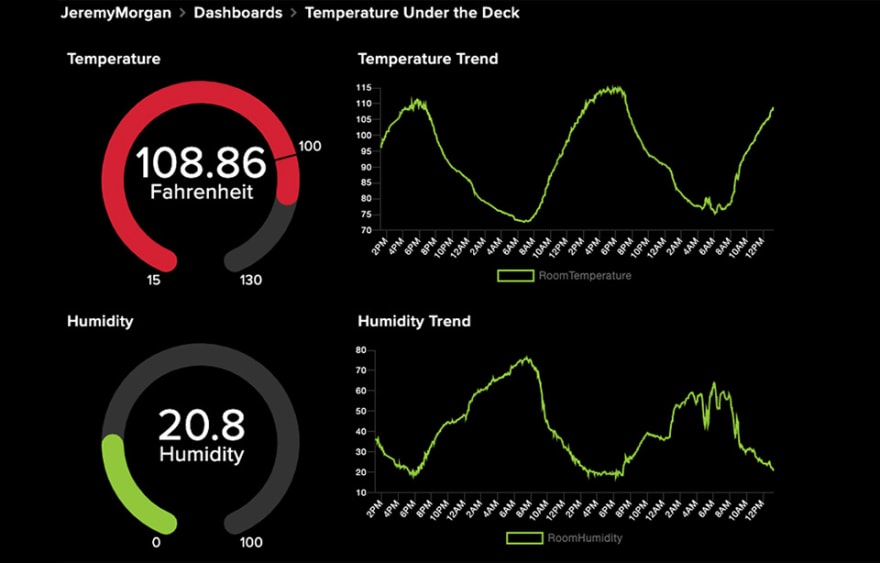 This was great for realtime data. Setting this is up is very easy, again I cover how to send data to Adafruit and set up a dashboard.

While the dashboards are neat, I wanted to take the entire data set and look at it. The dashboards only show a 24 hour window, but Adafruit collects the data and you can export it to JSON or CSV. 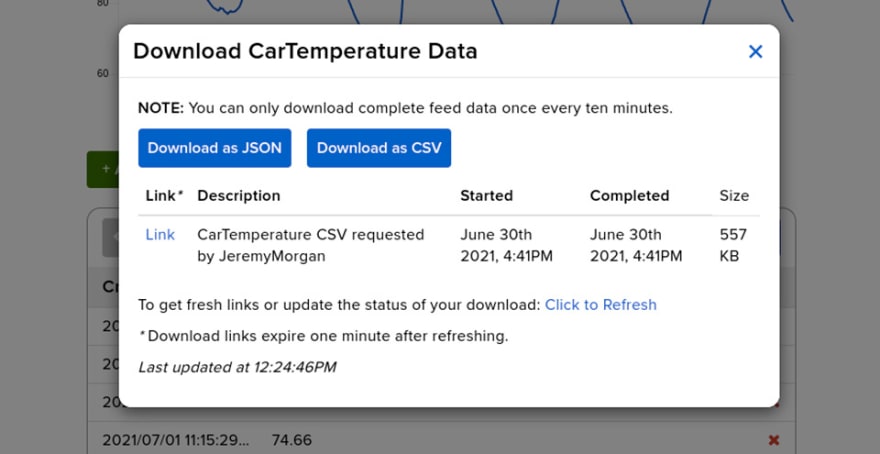 So I exported the data for the few days into CSV files. I could browse through them and spot check things but I wanted to merge all the data. I decided to drop them into a Sqlite database to do that.

I had a couple of issues right off the bat when dropping these into a database.

I had to consolidate them into a single database. Which created another issue:

The sensors took samples every thirty seconds. The two Raspberry Pis were not synchronized, and there was some clock drift.

Since the timestamps showed that sensors never took temperatures at the exact same time, I would have to sacrifice some precision.

I tackled this problem live on my Twitch stream. I decided to round off the seconds and use that timestamp as an index for the values.

I wrote a Go program live on stream that did the following:

First, I took the CSV with the fewest records in it. That way I knew we would have the most overlapping values. Some data streams were longer, but they wouldn't have values in the smaller streams. So this was the starting point.

I read in that file, and created a table with the timestamp and the value included. The timestamp would be our index.

Then for the subsequent feeds, I read in each of those .CSVs and inserted values to the corresponding timestamps:

And in the end I had a nice Sqlite database with the values I needed. 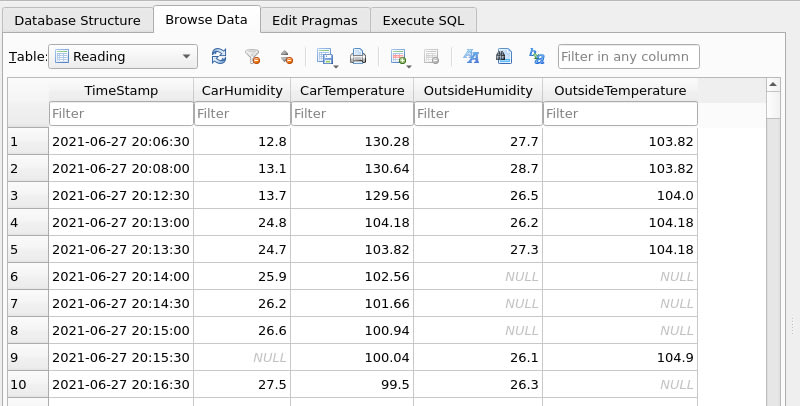 You can download all this data and the application to process it here.

Now I can dive into the data and try to get a good handle on how hot it got outside and how hot it was in the car.

Maximum temperature in the car:

Wow. So that was a bit unexpected. And of course, I'd like to match things up a little to see the inverse of each.

So what about the peak car temperature?

Unfortunately, the outside temperature sensor failed to read during this time but it was about an hour later, and reached 170.78 degrees. This is with windows cracked open. While this was during 100+ temperatures this is something to consider when you see a child or pet in a car on a hot day.

There are some other things we can look at with this data. Let's see the relationship between the two temperatures. 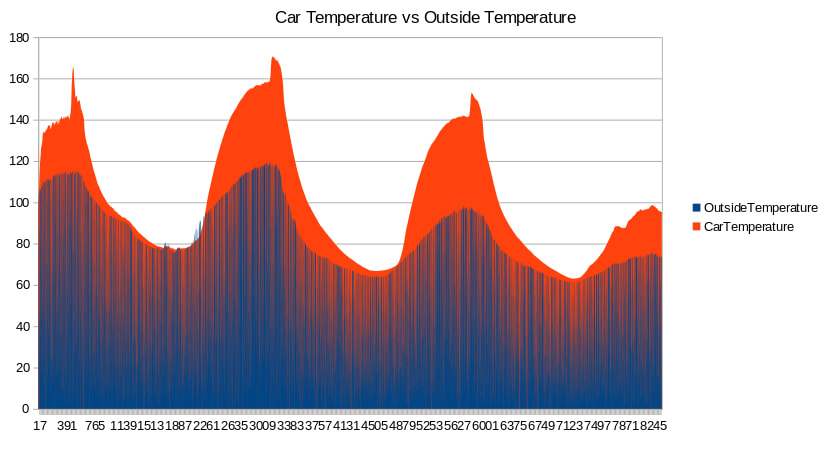 It's interesting how late at night when things "cooled down" to around 80 degrees, the two temperatures almost equalize. Yet if we zoom in deeper we can visually see how the heat builds in the car: 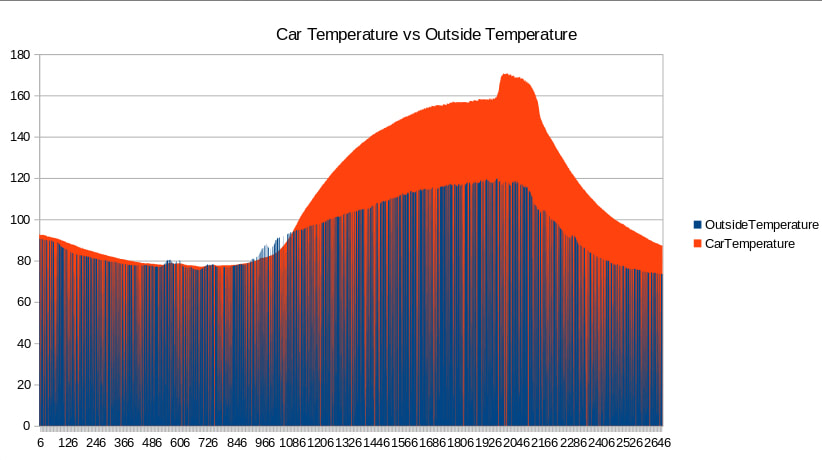 At a certain point, it even appears the car was cooler than the outside temperature. 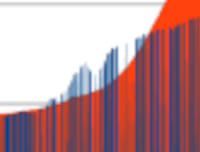 At midnight the car was a mere two degrees hotter than the outside temperature.

At 5am it was four degrees cooler in the car.

A couple of hours later it was eight degrees hotter than outside.

Near the peak of the day it was 50 degrees hotter in the car. Incredible.

You can see the peaks and valleys in the graphs.

I'll be doing even more with this data in the future. Very curious about how it ramped up and I want to look into it more.

So I've always been against leaving children and pets in your car on a hot day. Most of us are. But it's interesting to see exactly how hot it gets inside a car. This is absolute justification for calling the police when you see it. end rant.

This data is unique in that we were measuring during 110+ degree days, but you can still see the effects of the car. The only time the car wasn't hotter than the outside is when the sun wasn't on it. So we can deduce the sun shining through windows (they are not tinted on this car) affects the inside temperature. If it were an 80 degree sunny day I imagine the inside still capable of being 120 degrees or more. 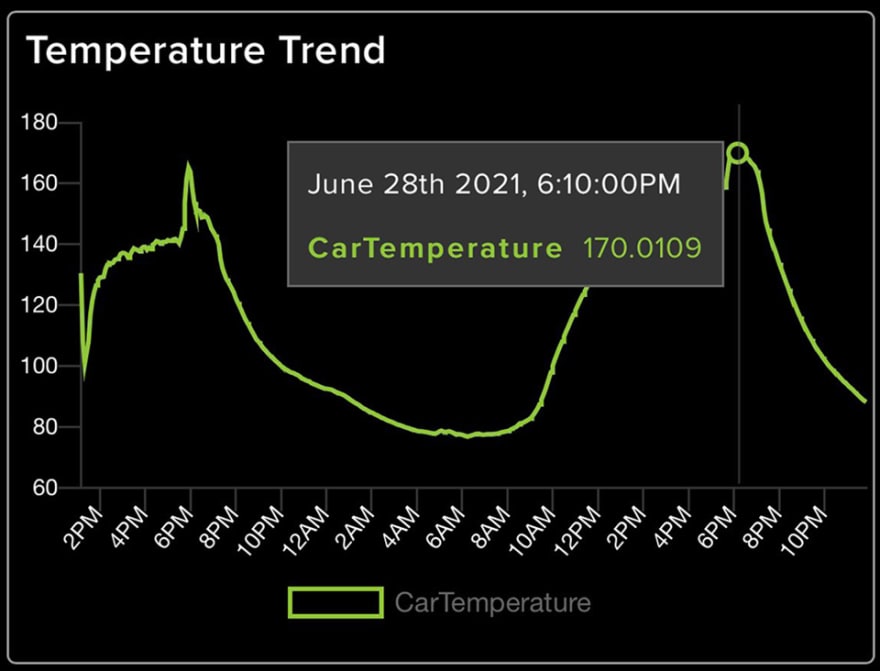 Lesson: We all know cars sitting in the sun get hotter, now we can see exactly how much hotter.

I wanted to share this data, how I put it together and what the results were. I hope you've enjoyed it.

You can download this data and process it yourself. The timestamps are UTC and I am in the PST region so keep that in mind. I'm curious to see what others might do with this data.

And be sure to check out some of the live streams I've done working on this data.

Questions? Comments? Yell at me!