Have you ever wondered how does a machine classify among different species of animals just by looking at a image? How does a machine able to predict whether there is a cat or dog in an image? A rule based system might work for some images, however when a new or unseen image is given to the machine, there are chances prediction may go wrong. Also, rule based system might not scale for large number of images. Deep Neural Network comes as a rescue for such kind of problems and it really scales well. Deep Neural Network simplifies and help classify the things. In this tutorial, I will cover some concepts related to Deep Neural Networks and show how to build a serverless image classification application using Microsoft Azure Functions and ML.Net framework. The implementation will be in C# language.

Before I jump into code, let's revisit some of the concepts used in this tutorial.

Serverless is an execution model where the cloud provider such as AWS, Azure or Google cloud is responsible for executing a piece of code by dynamically allocating the resources. The infrastructure is managed and maintained by the Cloud providers. The consumer is billed only for the resources consumed to run the code. It's an efficient way to reduce the overhead and cost of managing the servers. The code that is executed is in the form of a function, hence sometimes its called 'Function as a Service(Faas). It allows you to focus on writing business logic instead of spending time on managing the infrastructure. 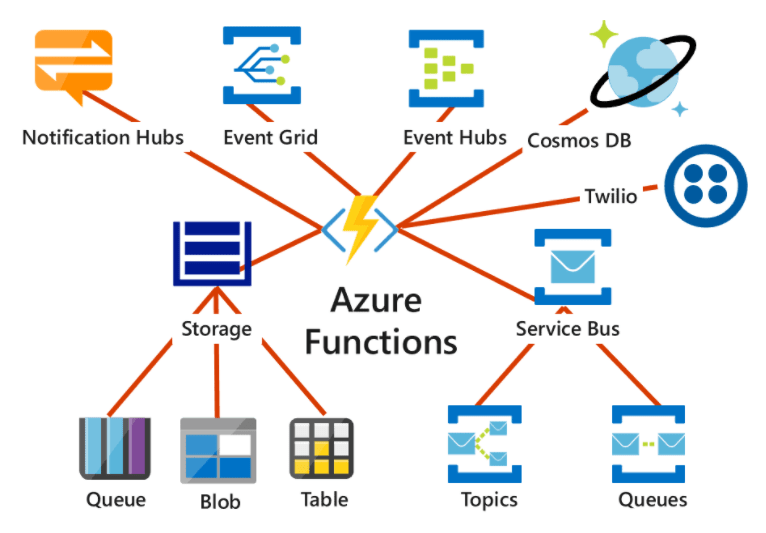 Azure Functions is a serverless framework developed by Microsoft and provides rich capabilities. It allows you to run a small piece of code(called 'Functions') without worrying about application infrastructure. It leverages event-driven capabilities and runs the code whenever a supported trigger happens. It support multiple triggers such as HTTP, Blob, Queue, Service Bus, etc. I'll be deploying the prediction part of machine learning pipeline to Azure functions which will take an image as an input and throw back a prediction.

Deep Learning is subset of Machine learning in Artificial Intelligence. It is capable of learning features on its own compared to machine learning where features are identified manually. A neural network, is a technology built to simulate the activity of a human brain such as pattern recognition and its done through a set of layers. When we have multiple layers present in a neural network, its called as Deep Neural network. It mainly comprise of an input layer, multiple hidden layers and a final output layer. I'll be using a pre-trained deep neural network such as ResNet18 in this tutorial. Pre-trained means its already trained on large amount of images and we'll use that learning to make predictions for new images being given to the machine learning pipeline. Its called as Transfer Learning. 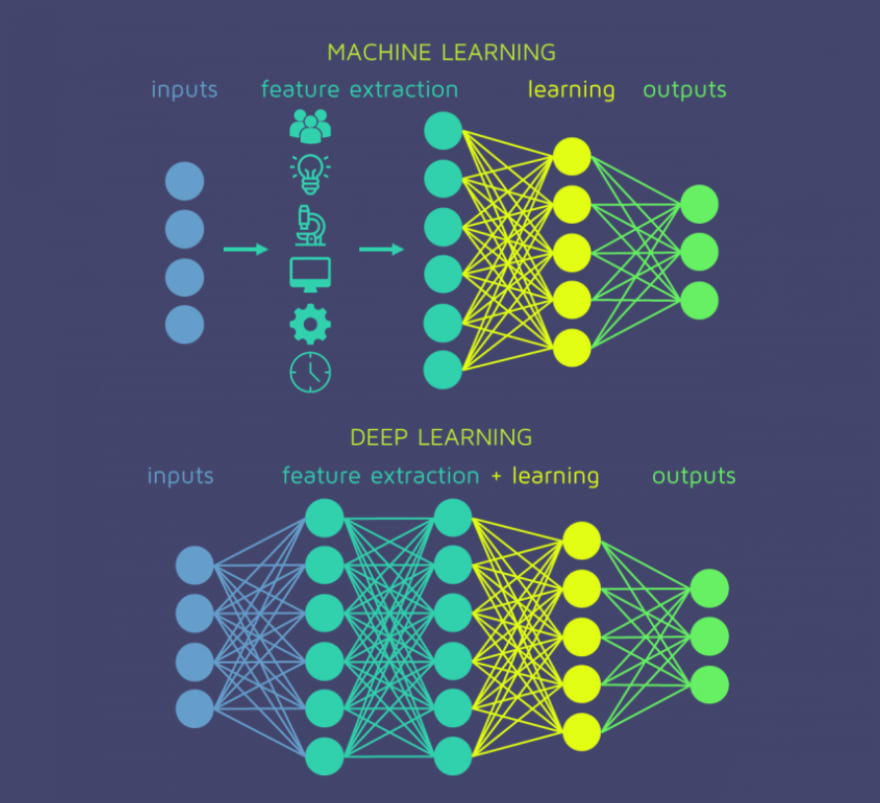 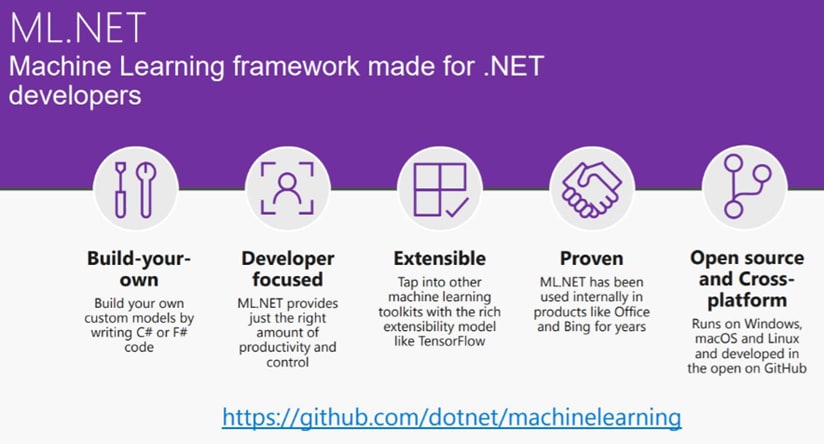 ML.Net is a cross-platform framework from Microsoft for developing Machine learning models in the .Net ecosystem. It allows .Net developers to solve business problems using machine learning algorithms leveraging their preferred language such as C# or F#. It's highly scalable and used within Microsoft in many of its products such as Bing, Powerpoint, etc. I'll be using image classification algorithms for this tutorial.

I am going to create an application that will classify an image based on 1000 classes present in ImageNet dataset. First we'll create a local console application and thereafter move it to Azure function(Local and Cloud). The framework used for this exercise is ML.Net and language is C#.

I'll be using a pre-trained MobileNet V2 model for predictions. In order to use this, donwload Mobilenet and upload it to Azure blob storage both locally(storage emulator) and cloud. I have stored it in 'serverlessdnnstorage' container and file name as mobilenetv2-7.onnx 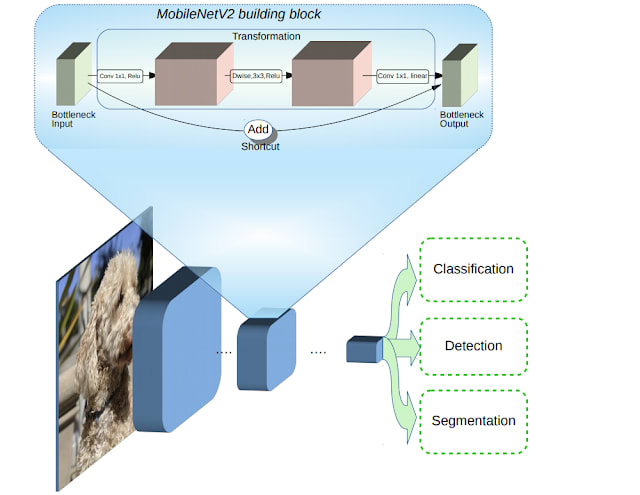 Let's create a new project and select 'Azure Function' from the project template and add this project to the existing solution. 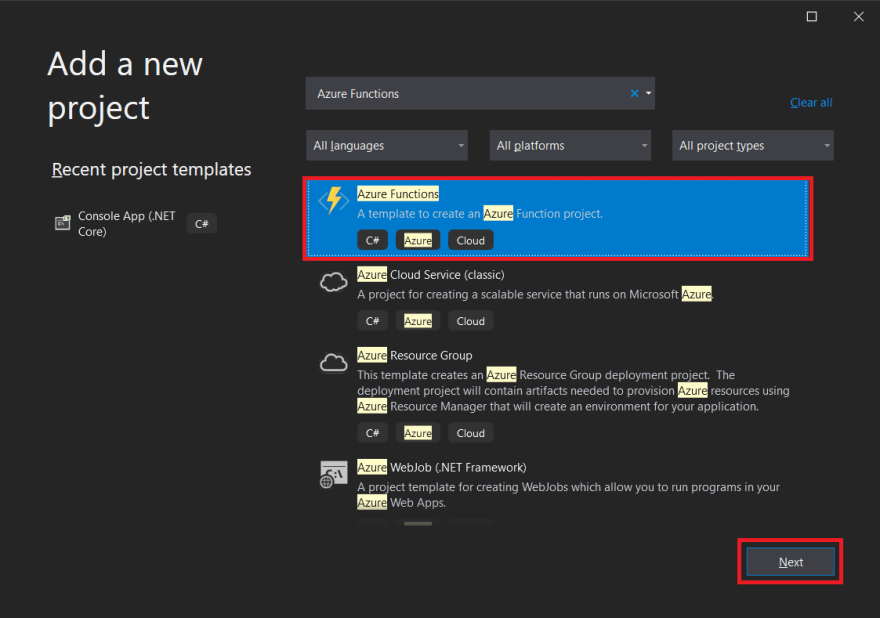 In the next dialog, give a name to the project 'ServerlessDNNFunction' and click create. 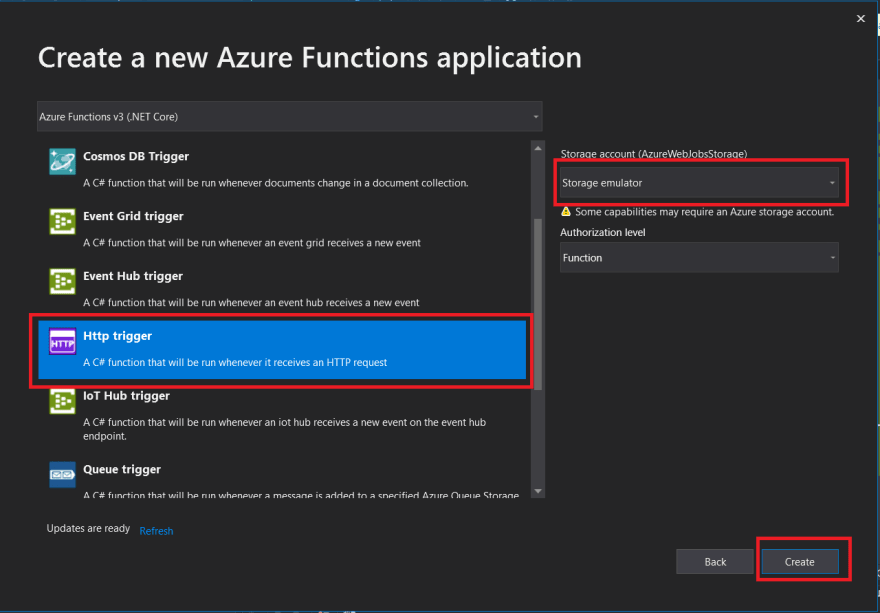 This will add a new project to ServerlessDNN solution. Build the solution, just to ensure there are no errors. A default function(Function1) will be added.

Rename 'Function1.cs' file to ClassifyImage.cs and ensure it gets changed in the function attribute as shown below.

Press F5 to run the project and it should generate an endpoint like http://localhost:7071/api/ClassifyImage

In order to upload an image from postman, create a POST request with above URL and select 'Body' as binary. Select a file by clicking on 'Select File' in the Body tab

In order to use the pre-trained model, we need to upload mobilenetv2-7.onnx (14MB) to some storage. The file can be accessed through disk or Storage Blob. In order to keep the experience same for both local and cloud, I have used storage emulator for storing/reading the model. The model can be uploaded through Microsoft Azure Storage Explorer. 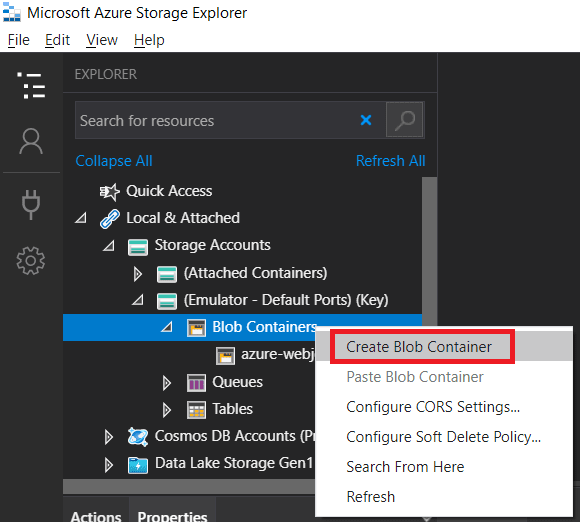 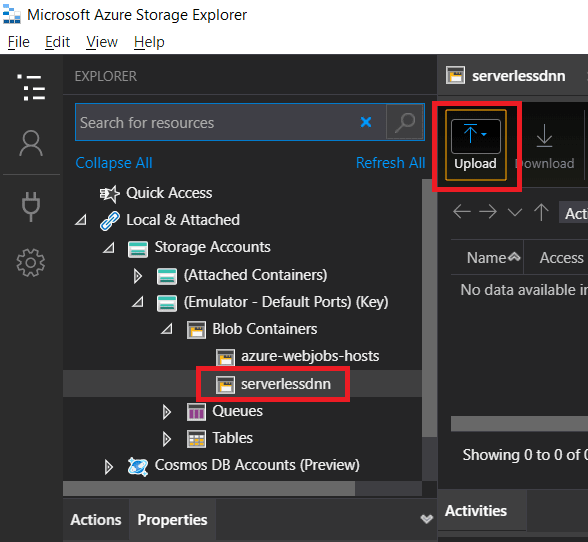 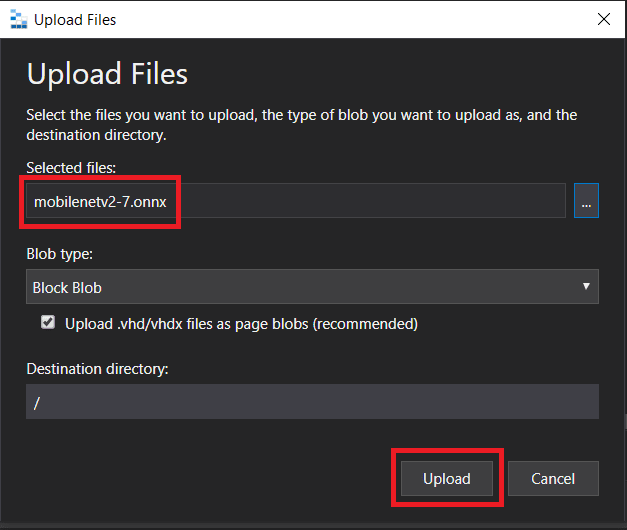 Model will be uploaded to blob and available to be used.

Navigate back to Azure function in visual studio. In order to load model we need to have below changes

Add a new struct 'InputSettings' for holding attributes of image such as height and width. As we are working with MobileNet, it expects input image to be of size 224 x 224

Add a new class 'ModelInput' which holds information about the input image that will be uploaded and its class as Label. ImageType attribute allows defining the size of image.

Add a new class 'ModelOutput' which holds information about the output image that will be uploaded.

Make a note of input and output layer names and use it. 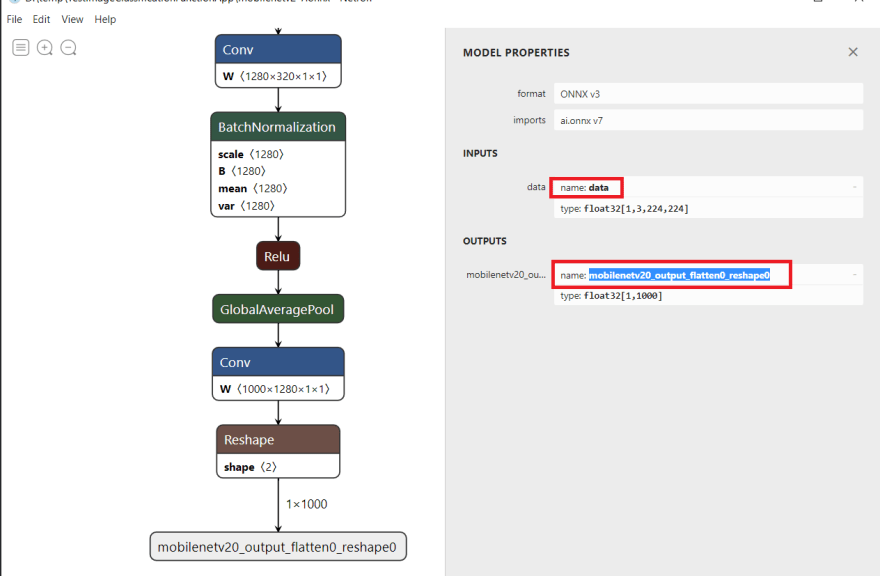 In order to predict, we need to supply the image uploaded to Azure function and pass it to the ML pipeline. In ML.Net PrectionEngine has Predict(...) API to perform prediction on a single input image. maxScore gives the predicted class

STEP-5: Return Predicted value as a response to Function API 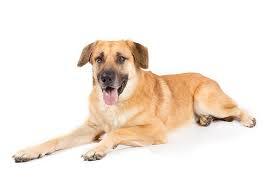 Predicted class is 212 which corresponds to 'English Setter', one of the dog breed. The prediction may not be very accurate as we have used MobileNet which doesn't have a very good accuracy. The reason of using it is small model size. Azure function can process small models only in consumption plan. If you have a high configuration of Azure Function, a large model could be used. Also, memory allocated in consumption plan is 1.5 GB only for the CPU.

Now we are going to deploy this function app on Cloud(Azure). We need an Azure subscription for it. Deploying to azure is pretty easy through Visual Studio. Steps in deploying the Azure Function to the cloud is as follows.

Deploy to Cloud
Before we deploy function to cloud, please ensure mobilenetv2-7.onnx is saved to Azure Storage blob with the correct container name and blob name. Follow the steps mentioned for local, just replace local with Azure account. 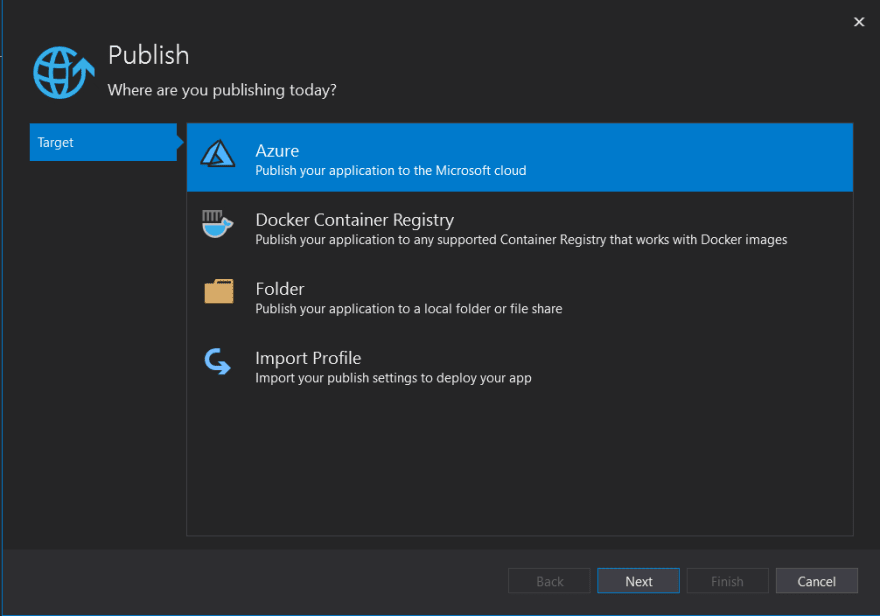 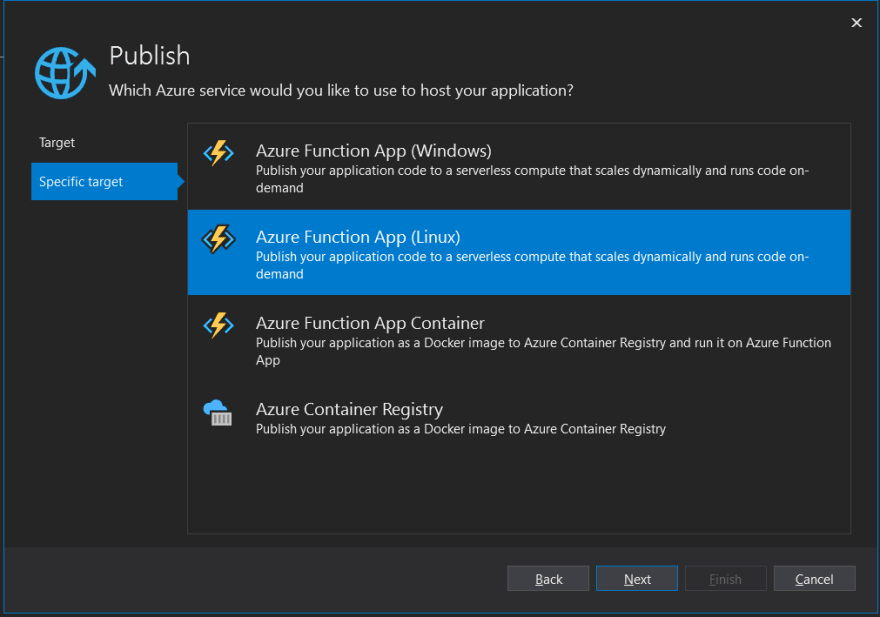 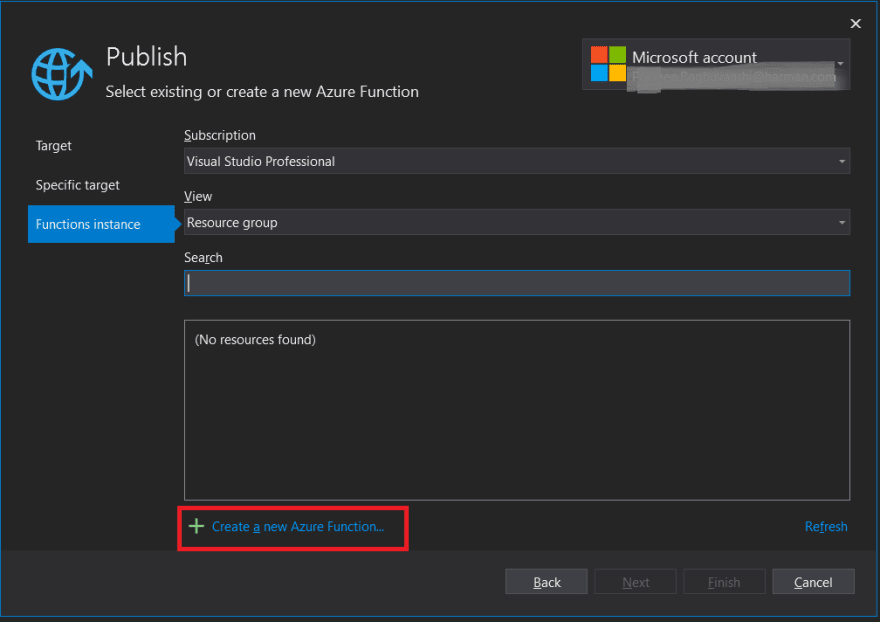 Fill in the details of new Azure function 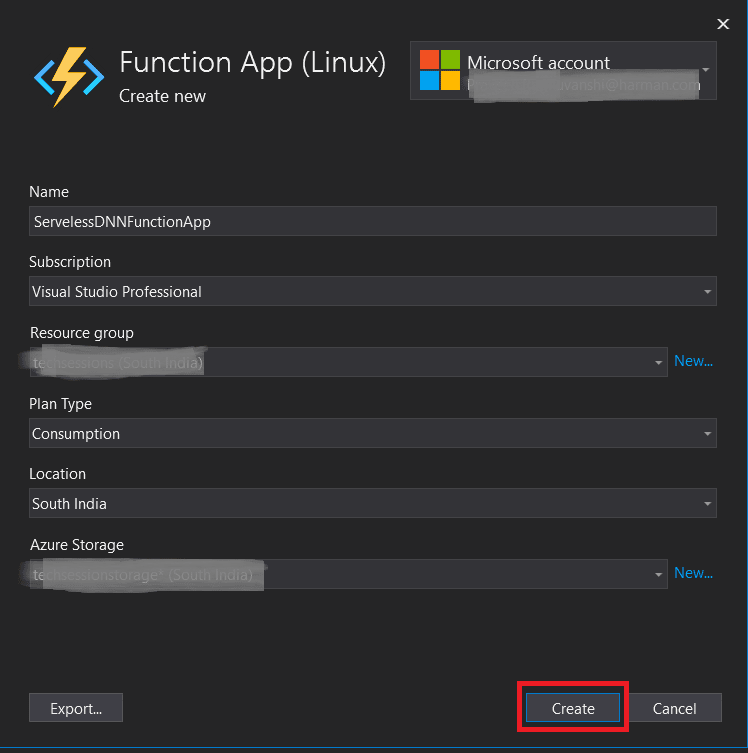 If above step is successful, skip next step. If its unsuccessful and gives below error, navigate to previous dialog, select 'Specific target' and select 'Windows'. Hopefully this time Azure function will be created. 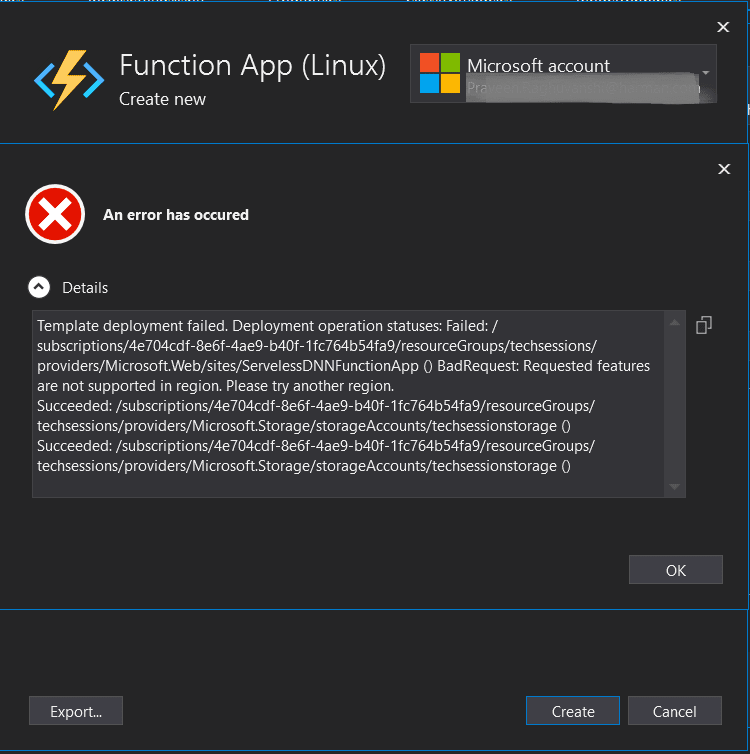 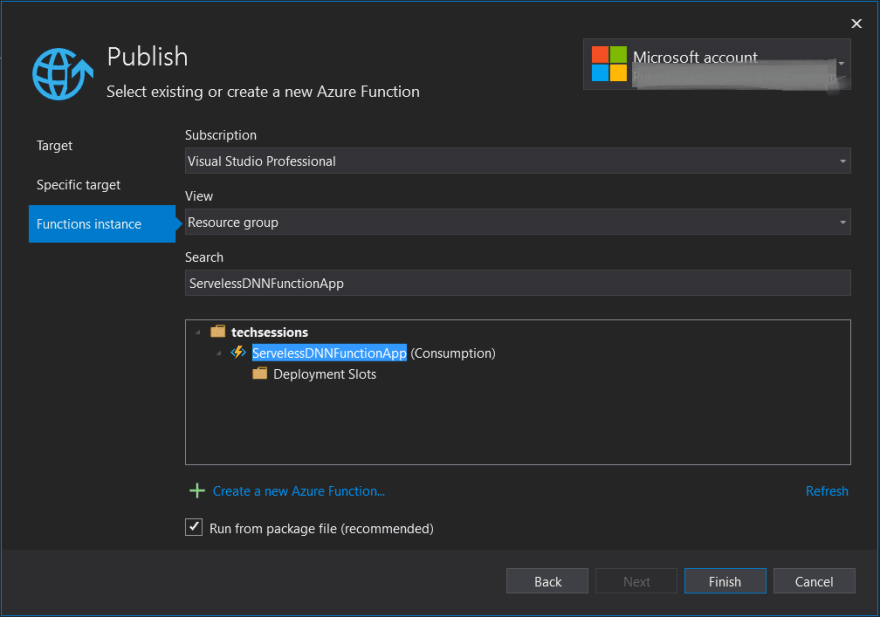 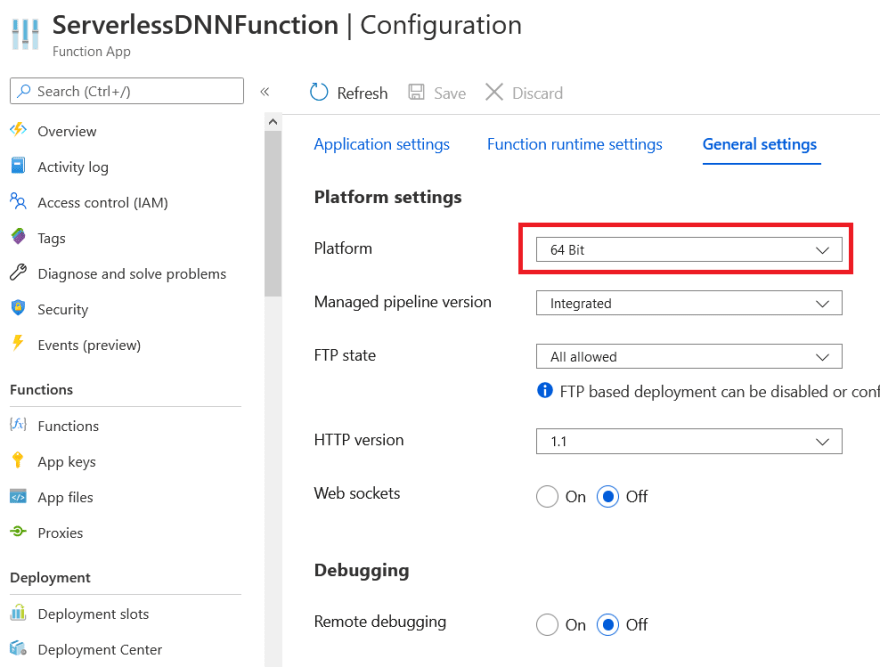 Predicted class is 212 which corresponds to 'English Setter', one of the dog breed. The prediction may not be very accurate as we have used MobileNet which doesn't have a very good accuracy. The reason of using it is small model size. Azure function can process small models only in consumption plan. If you have a high configuration of Azure Function, a large model could be used. Also, memory allocated in consumption plan is 1.5 GB only for the CPU.

In this tutorial, we saw how we can leverage transfer learning to create deep neural networks and consume it within .Net ecosystem. Later we deployed the azure function app to Azure cloud and saw how easy is to create an image classification application. We saw lot of concepts such as Deep Neural networks, Serverless, Azure Functions and ML.Net being utilized and combined together to create an amazing application.

I am running an unofficial telegram group for ML.Net enthusiasts, please feel free to join it at https://t.me/joinchat/IifUJQ_PuYT757Turx-nLg

Diff of a range of commits in a Github PR

Decals vs. Stickers, which one is better?

What is the point of Crypto in games?!

Once suspended, praveenraghuvanshi will not be able to comment or publish posts until their suspension is removed.

Once unsuspended, praveenraghuvanshi will be able to comment and publish posts again.

Once unpublished, all posts by praveenraghuvanshi will become hidden and only accessible to themselves.

If praveenraghuvanshi is not suspended, they can still re-publish their posts from their dashboard.

Once unpublished, this post will become invisible to the public and only accessible to Praveen Raghuvanshi.

Thanks for keeping DEV Community 👩‍💻👨‍💻 safe. Here is what you can do to flag praveenraghuvanshi:

Unflagging praveenraghuvanshi will restore default visibility to their posts.