Sketching algorithm designed to solve the count-distinct problem within acceptable error rate. Described in the paper "HyperLogLog: the analysis of near-optimal cardinality estimation algorithm", published by Flajolet, Fusy, Gandouet and Meunier in 2007. Improvements were proposed in "HyperLogLog in Practice: Algorithmic Engineering of a State of The Art Cardinality Estimation Algorithm", published by Stefan Heulem, Marc Nunkesse and Alexander Hall.

Based on simple obervation : On average, a sequence of k consecutive zeros in binary form of a number will occur once in every 2^k distinct entries. E.g. if we have a large enough collection of fixed-width numbers (e.g. 32/64/128 bit) and while going through it and we find a number starting with k consecutive zeros in binary form, we can be almost sure that there are at least 2^k numbers in that collection. 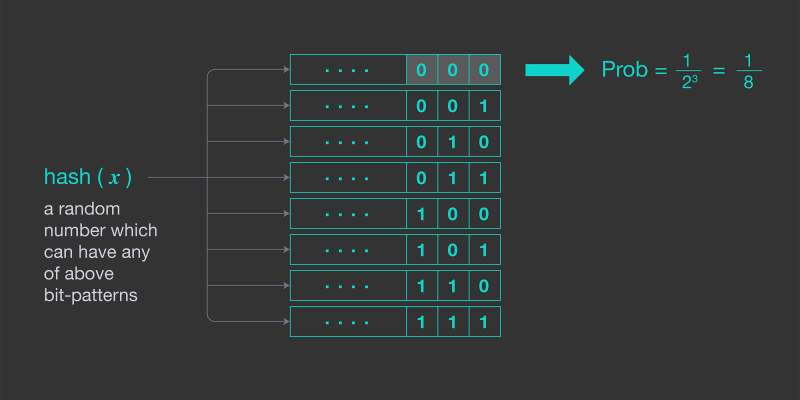 To solve the issue faced by simple estimator we will use multiple estimators(let's say of m number) and divide the input collection between them. So, now each estimator has its own ( R ). We get single estimate using harmonic mean of individual estimates of counters.

A estimator is basically just a register or a single variable holding longest sequence of consecutive zeros. Each estimator can be thought of as a bin. So we have m bin i.e m registers (or just array of size m really) to imitate m estimator.

To divide the input collection between the m estimators we can reserve some starting bits of hashed value for bin index and rest bits for counting longest sequence of consecutive zeros.

Illustration of this (credits : engineering.fb.com) : 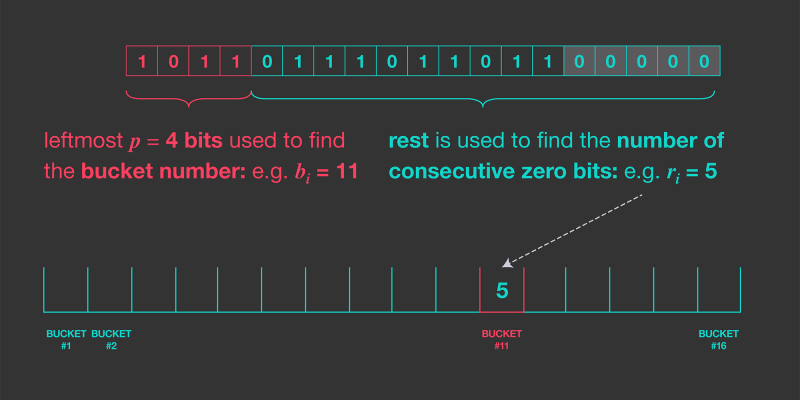 This is the basis of the hyperloglog algorithm. The algorithm described in the paper with some error corrections is as follows idea behind it remains same though : 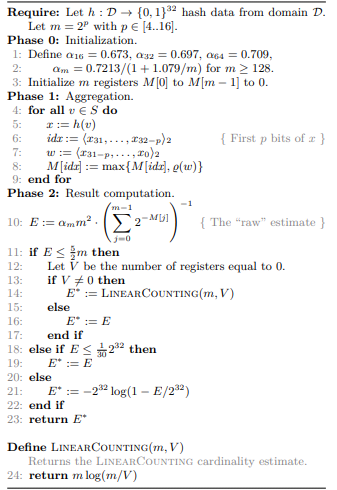 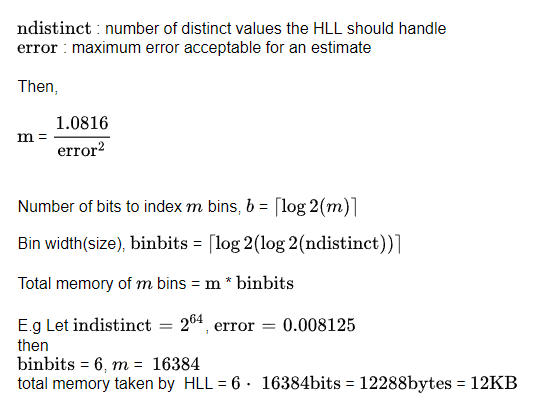 From above illustration we can clearely see that only 12 KB storage is required for a very large ndistinct value and relatively small error rate.

Improvements were proposed in "HyperLogLog in Practice: Algorithmic Engineering of a State of The Art Cardinality Estimation Algorithm", published by Stefan Heulem, Marc Nunkesse and Alexander Hall : 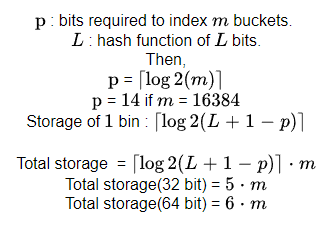 Improvement paper found out that the error for small cardinalities is due to a bias(i.e algorithm overestimates the cardinalities). They also could correct the bias by precomputing the bias values and substracting them from the raw estimate. 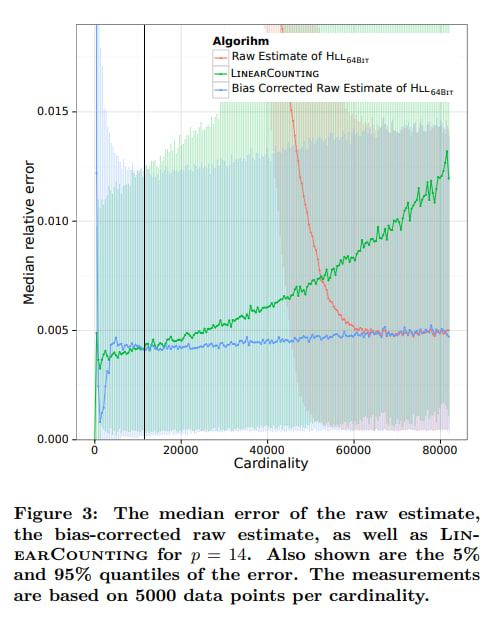 This figure from Improvement paper shows the bias for raw estimate. Also, it shows linear counting is still better than bias-correction for smaller cardinalities.

From this they concluded to perform linear counting till 11500 for p = 14 and bias correction after that.

When n << m, then most of the bins(2^14 if p=14) are empty and memory is wasted. So instead we can store just pairs of (idx, R) values (idx - index of bin, R - longest consecutive zeros sequence observed by that bin).

For the demo I will be using postgress_hyperloglog. This is a postgreSQL extension implementing hyperloglog estimator. You can follow the installation steps from the repo README.

You can serialize these estimators, save them and load them again to operate on later. 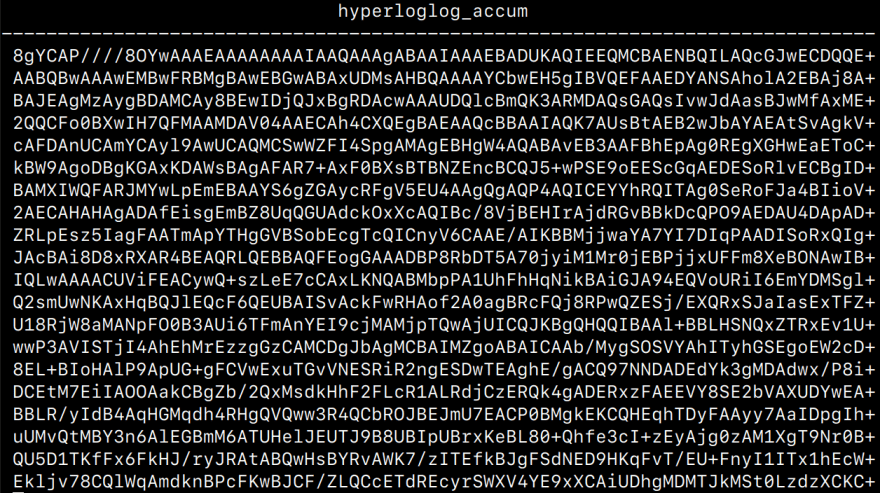 We can also get estimate from this accumulated result(example 2).

Internal hll data structure is binary compatible with base64 encoded byte string - so they are interoperable. This way we can perform hyperloglog_get_estimate operation on the hll estimator returned by hyperloglog_accum.

For other examples you can refer to sql references and try it out yourself.

My day is being planned by an algorithm

Once suspended, q1ra will not be able to comment or publish posts until their suspension is removed.

Once unsuspended, q1ra will be able to comment and publish posts again.

Once unpublished, all posts by q1ra will become hidden and only accessible to themselves.

If q1ra is not suspended, they can still re-publish their posts from their dashboard.