After an extensive bit of research and study, I made myself able to code my first Flutter application. The name of the application I did was Flutter Dice. It's a Flutter dice application. I took the help of Udemy and Youtube in making of this application.

As a newbie to Flutter it was the first time I used stateful widgets in Flutter. The application has two pictures one on the left and the other on the right side that have buttons embedded on them. And a set of six pictures representing different dice heads were given as an asset. 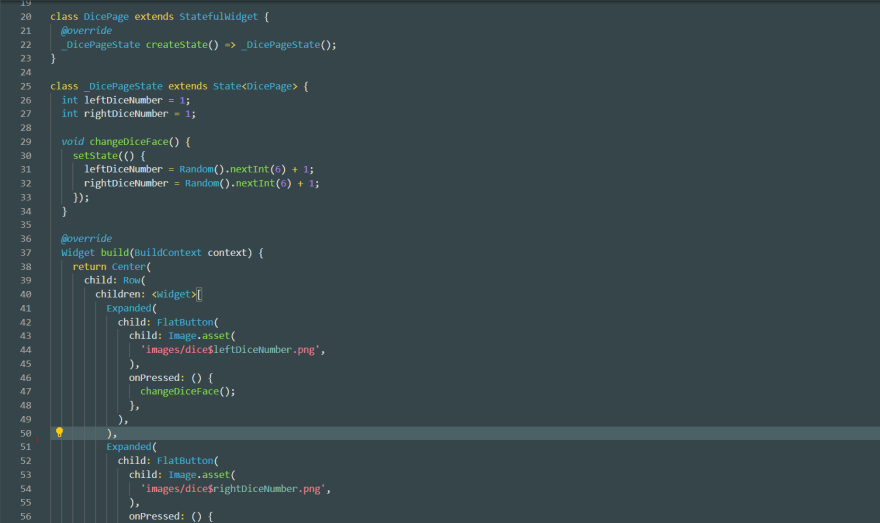 I have learned a lot by making this application. I was able to use the knowledge of Math libraries, Stateful widgets and more in this simple application. And thus I created my first Flutter Application.. :)

I'm basically a Front-End Web Developer. I also like to devote my time into Flutter.

Is Flutter Desktop ready for experimentation?

Setting up flutter without Android studio

Rahul Mahesh
I'm basically a Front-End Web Developer. I also like to devote my time into Flutter.
Awesome Command-Line tools to boost your productivity
#linux #bash #productivity
August 6th, 2020: What did you learn this week?
#weeklylearn #discuss #weeklyretro
🛠 A List of the Best VS Code Extensions For Front-End Developers
#webdev #vscode #javascript #productivity