In this post, we'll take a look at the following:

Letter, words and sentences are all human constructs created to communicate. Computers, however, understand only the language of binary - 0s and 1s. By understanding character encodings, we can understand how computers store all the text that we see on our digital devices - tweets, facebook posts, and even this blog post!

All language can be broken down into a sequence of characters. Different encodings store these characters in different ways. To keep things simple in the beginning, let us assume that we are interested in only letters of the English alphabet (lowercase and uppercase), the 10 digits (0 to 9), and a few special symbols (e.g. +, -, ?, *).

In ASCII (American Standard Code for Information Exchange), each character is stored as a sequence of 7 bits. Each bit can be either 0 or 1. Therefore, there are 27=128 possible characters that can be represented using ASCII. This collection of 128 characters is called the ASCII character set.

Most computers deal with memory in chunks of 8 bits (also known as a byte). In this case, the left-most bit is left unused (kept with a value of 0) and the 7 bits on the right-hand side are used to represent the character. 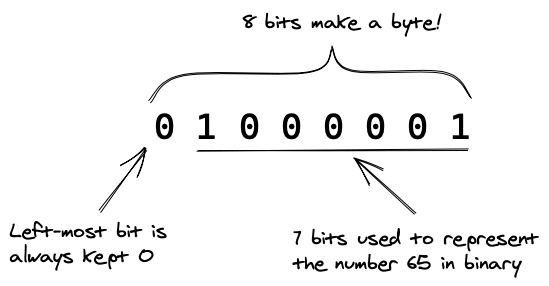 Since writing in binary can be space and time-consuming, we can use the hexadecimal equivalent instead. So the character "A" can be represented as 41. 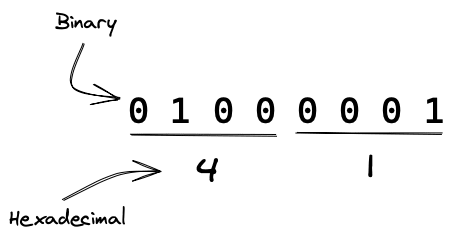 You can find a list of how each character is represented in ASCII here.

Since ASCII can be used to represent only 128 characters, it isn't enough for all the different characters in various languages.

An attempt to fix this issue was to make the left-most bit that is unused in ASCII do something. This gave birth to ISO 8859.

The ISO 8859 family is a series of 10 different standards that are a superset of ASCII.

In each of these standards, when the left-most bit is 0, the remaining bits represent ASCII characters as usual.

When the left-most bit is 1, each of the standards use the remaining 7 bits to represent 128 new characters.

You can find a list of all the characters represented by each of the standards when the left-most bit is 1 here.

Also, a total of 256 characters was still not enough for all the languages in the world that collectively have thousands of letters!

The solution to the problem of representing thousands of different characters across different languages turned out to be: splitting character sets and character encodings.

A character set is a mapping of a single character to unique numbers. These numbers are called code points.

A character encoding is a mapping of these code points to actual bytes that are stored in a computer.

Unicode is a character set - it is a mapping of over 140,000 characters to a unique number. You can find a complete list of all characters and their corresponding numeric value on the Unicode homepage.

Unicode values are usually represented by "U+" followed by hexadecimal numbers, e.g. U+0033 is the Unicode number for the digit "3".

The way these decimal numbers are stored as bytes in a computer's memory depends on the character encoding used, e.g. UTF-8, UTF-16 and UTF-32.

UTF-8 is a variable encoding format. This means that a fixed number of bytes cannot be used to represent every character like in ASCII. Each character can be between 1 to 4 bytes long.

All code points between 0 - 127 are the same as ASCII and are also stored in a single byte with the left-most bit set to 0. Therefore, all valid ASCII is valid UTF-8.

All code points above 127 require multiple bytes to be encoded. The number of left-most 1s followed by a 0 in the first byte indicates how many bytes are there are in the encoding.

The Xs are the positions that can be used to store the actual encoding of the character in binary format. However, not all two-byte encodings that have this format are valid.

For example, consider the character "A" with the code point 65 (1000001 in binary). It may be tempting to encode it using two bytes as follows: 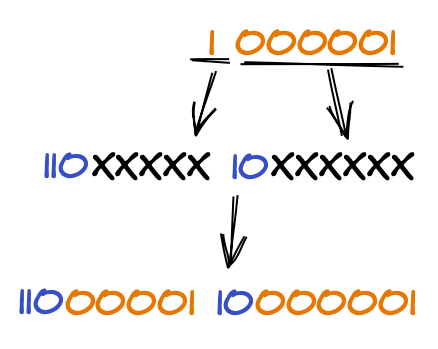 This is an invalid encoding since all code points between 0 - 127 require a single byte.

The following table summarizes the range of code points that each multi-byte encoding can be used to represent.

When trying to encode a character using UTF-8, you need to:

Since 394 falls between 80 and 7FF, we need 2 bytes to encode this character. The two bytes will have the format 110XXXXX 10XXXXXX, where the Xs will be replaced by the binary value of the code point. 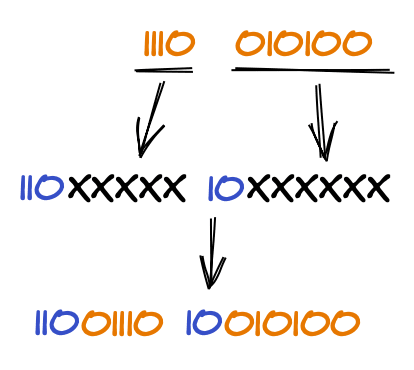 When placing these bits, start from the right-hand side. Put 0 in all the additional Xs on the left-hand side.

Decoding a sequence of bytes encoded using UTF-8 is a two stage process. Since a character may be encoded using multiple bytes, we first need to group bytes that are part of a multi-byte encoding together. Then we can convert each byte/group of bytes into the character they represent.

It would be easier to see which bytes are part of a multi-byte sequence if we convert to binary.

These bytes can be divided as follows:

Therefore, this byte sequence is an encoding of the word "résumé" in UTF-8.

Hopefully, the following things were made clear by reading this post: