What is a burndown chart?

A sprint burndown chart is a graph that shows the amount of work completed in a given interval versus the amount of work that was expected to be completed in the same period. In other words, the burndown chart shows the actual rate of completion of a project against the projected rate of completion for a given sprint. This then becomes an information radiator showing the latest information.

The present performance is known as the burndown rate. A burndown chart shows this burndown rate clearly and makes it easy to estimate if the task will be completed on time. These charts are also seen from the perspective of work that's yet to be done versus time. Based on this the team can decide to take any necessary steps to speed up the process and make any changes needed.

Here, the rate at which a scrum team progresses is known as the velocity. This is a measure of the number of story points completed in a sprint. Only stories that are actually completed are included in this velocity.

Burndown charts are mostly used in agile methods such as scrum, but can also be used to estimate the performance of any project. The exact metrics used in a sprint burndown chart would differ based on the team and project. However, the basic idea of work done/ left to be done vs work expected to be done remains the same.

Parts of a burndown chart

At the end of the sprint, the aim is to complete all the remaining tasks or to clear the backlog. 'Burning down' means doing so, ie, completing the backlog until there's no work left. The parts constituting a burndown chart are the same you'd expect to see on most X-Y graphs. These are: 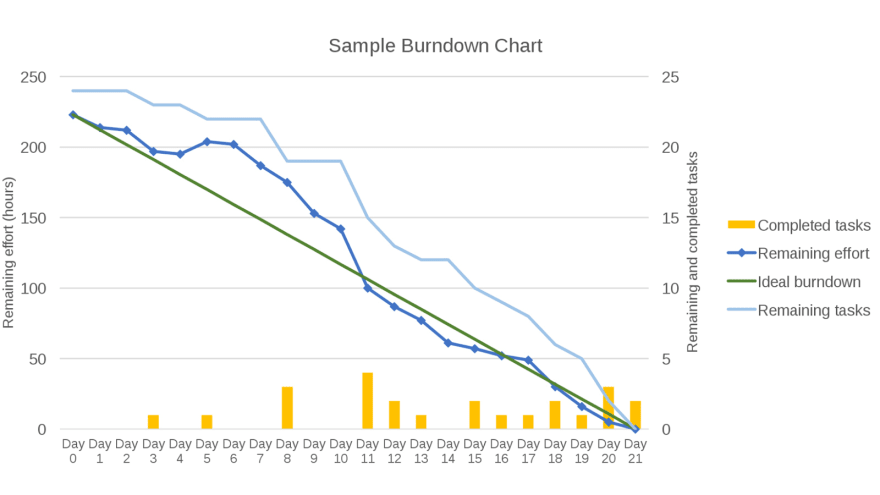 Both the progress line and the guideline show the total story points that are assigned to issues and requests under the milestone. The burndown chart automatically reflects the completed work as issues are closed. Let's understand this below.

Who handles the chart?

Agile teams are not very big and as such, all the team members have a responsibility to handle the burndown chart. This involves creating and updating it. These people responsible for the chart are the development team, the product owner and the scrum master.

The third party, the scrum master, is responsible for ensuring that the team follows the agile scrum principles. The scrum master supports and coaches the team in this pursuit.

What does the chart show?

The following entities are represented in the burndown charts:

How to read a burndown chart?

If you're familiar with graphs, then by now you already know how to read the sprint burndown chart and what you can understand from it. However, here's a quick overview of how to go about reading a Burndown chart.

Keep in mind that the Burndown chart shows how close the team is to the expected schedule of completing tasks. As such, we are going to read it based on how well the team has been able to stick to the schedule itself.

How to create a burndown chart?

Now that you have all the information you need to understand what a burndown chart is, it's time to create one for your team. The following four steps will help you do so with ease. You may wish to use units other than the ones mentioned.

If you liked this article, also check out these other startup and building related articles:

Once suspended, rebecca will not be able to comment or publish posts until their suspension is removed.

Once unsuspended, rebecca will be able to comment and publish posts again.

Once unpublished, all posts by rebecca will become hidden and only accessible to themselves.

If rebecca is not suspended, they can still re-publish their posts from their dashboard.

Once unpublished, this post will become invisible to the public and only accessible to Rebecca Ferrao.

Thanks for keeping DEV Community 👩‍💻👨‍💻 safe. Here is what you can do to flag rebecca:

Unflagging rebecca will restore default visibility to their posts.