What is Incremental Static (Re)Generation?

For understanding Incremental Static Generation, let the explanation be guided by a scenario where a page requested by the user was not pre-rendered while statically exporting the website. In such a case, a fallback page is served while the data loads. Further, upon completion of building the page with the fetched data, the page is then cached onto the server. Any user requesting the page then would skip over the fallback and loading stages, and directly see the built page. Superb! 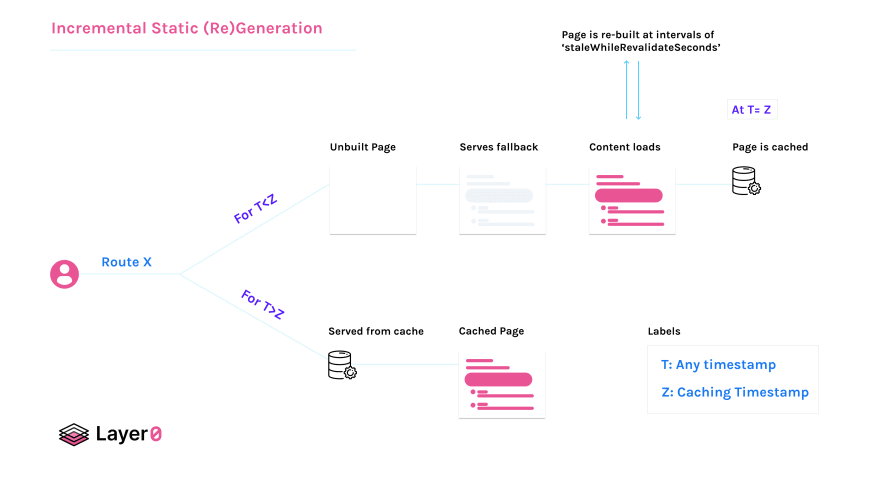 This can be followed up by two questions:

With Incremental Static Generation and Regeneration, creates the possibility to initially have the minimal static export, and then create and regenerate the pages on-demand, without re-building the website. This would account to faster deployments, hassle-free handling of regenerating the pages without the need to re-build the website.

As the concept is inspired by stale-while-revalidate, the data is certain to be stale for a period. This nature might be undesired for a web product that aims to serve fresh content for each user. Using ISG or ISR would lead to serving the content that is yet to be updated for some set of the users (those who hit it before revalidation time), or might show the fallback for some (those who hit it after maxAgeSeconds time). This might lead to degraded user experience, but that is very specific to the use case.

Getting started with ISG in Nuxt.js with Layer0

This section will describe how to implement ISG with Layer0 and Nuxt.js. The steps include configuring a nuxt app with layer0, creating dynamic page and api routes, and finally using layer0 configurations to see ISG in action.

Run the Nuxt.js app with the command:
npm run layer0:dev

Nuxt makes it super easy to create dynamic pages. To set up a dynamic route, create a file _slug.vue in some-route folder in pages directory of your app.

To obtain the dynamic parameter slug, nuxt provides a data fetching hook asyncData which has access to the context object. For example, in the following pages/some-route/_slug.vue dynamic page, one can obtain the slug via params.slug to make data fetching calls before the page gets rendered.

To set up dynamic api routes, nuxt provides a server middleware can also extend Express which allows creation of REST endpoints
For example, the following server-middleware/rest.js will fetch and return data for all the endpoints that start with /api/some-route/ and ends with .json.

With Layer0, it's easier than ever to implement Incremental Static Generation for different purposes with different frameworks. The following seeks to implement ISG with Nuxt.js via Layer0. 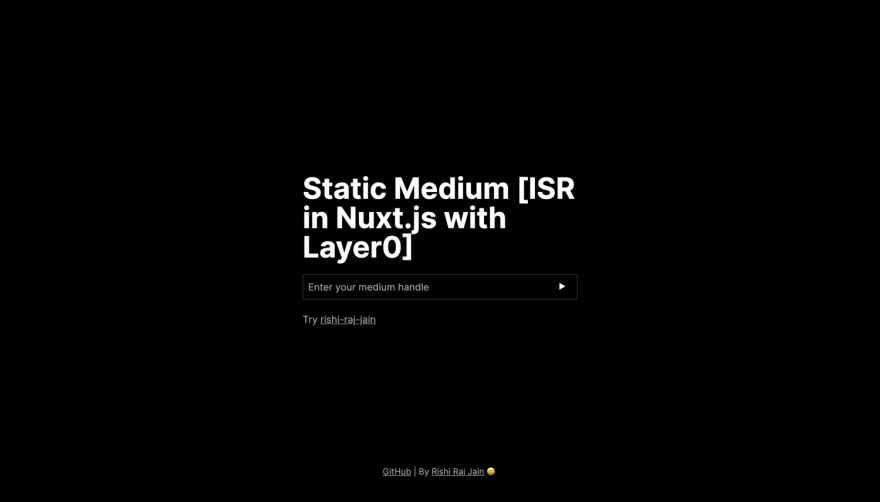 Damn! It got featured #1 on BuiltWithTailwind!

Once suspended, reeshee will not be able to comment or publish posts until their suspension is removed.

Once unsuspended, reeshee will be able to comment and publish posts again.

Once unpublished, all posts by reeshee will become hidden and only accessible to themselves.

If reeshee is not suspended, they can still re-publish their posts from their dashboard.

Once unpublished, this post will become invisible to the public and only accessible to Rishi Raj Jain.

Thanks for keeping DEV Community safe. Here is what you can do to flag reeshee:

Unflagging reeshee will restore default visibility to their posts.