Understanding the PostgreSQL query plan is a critical skill set for developers and database administrators alike. It is probably the first thing we would look at to start optimizing a query, and also the first thing to verify and validate if our optimized query is indeed optimized the way we expect it to be.

Before we attempt to read a query plan it is important to ask some very basic questions:

Every query goes through different stages and it is important to understand what each stage means to the database. 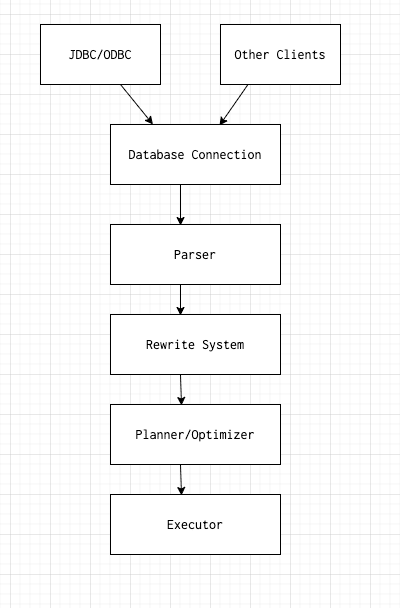 The first phase is connecting to the database through either JDBC/ODBC (API's created by Microsoft and Oracle, respectively, for interacting with databases) or by other means such as PSQL (a Terminal front-end for Postgres).

The second phase would be to translate the query to an intermediate format known as the parse tree. Discussing the internals of the parse tree would be beyond the scope of this article, but you can imagine it is like a compiled form of an SQL query.

The third phase is what we call the re-write system/rule system. It takes the parse tree generated from the second stage and re-writes it in a way that the planner/optimizer can start working in it.

The fourth phase is the most important phase, and the heart of the database. Without the planner, the executor would be flying blind for how to execute the query, what indexes to use, whether to scan a smaller table to eliminate more unnecessary rows etc. This phase is what we will be discussing in this article.

The fifth and final phase is the executor, which does the actual execution and returns the result. Almost all database systems follow a process which is more or less similar to the above.

Let's setup some dummy table with fake data to run our experiments on.

And then fill this table with data. I used the below Python script to generate random rows.

The script uses the Faker library to generate fake data. It will generate a csv file at the root level and can be imported as a regular csv into PostgreSQL with the below command.

Since id is serial it will get automatically filled by PostgreSQL itself. The table now contains 1119284 records.

Most of the examples below will be based on the above table. It is intentionally kept simple to focus on the process rather than table/data complexity.

The below examples use the Arctype editor.

Getting into the planning stage

PostgreSQL and many other database systems let users see under the hood of what is actually happening in the planning stage. We can do so by running what is called an EXPLAIN command.

By using EXPLAIN, you can look at query plans before they are actually executed by the database. We will get to the understanding part of each of these in the below section, but let's first take a look at another extended version of EXPLAIN called EXPLAIN ANALYSE. 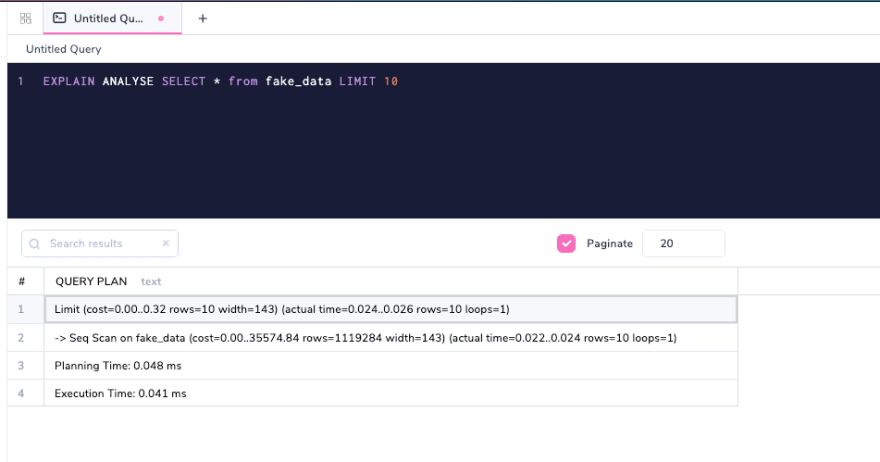 Unlike EXPLAIN, EXPLAIN ANALYSE actually runs the query in the database. This option is incredibly helpful to understand whether the planner is not playing its part correctly; i.e whether or not there is a huge difference in the plan generated from EXPLAIN and EXPLAIN ANALYSE.

PostgreSQL is comfortable with both ANAYLYZE and ANALYSE

Let's proceed to a more interested metric called BUFFERS. This explains how much of data came from PostgreSQL cache and how much had to fetched from disk. 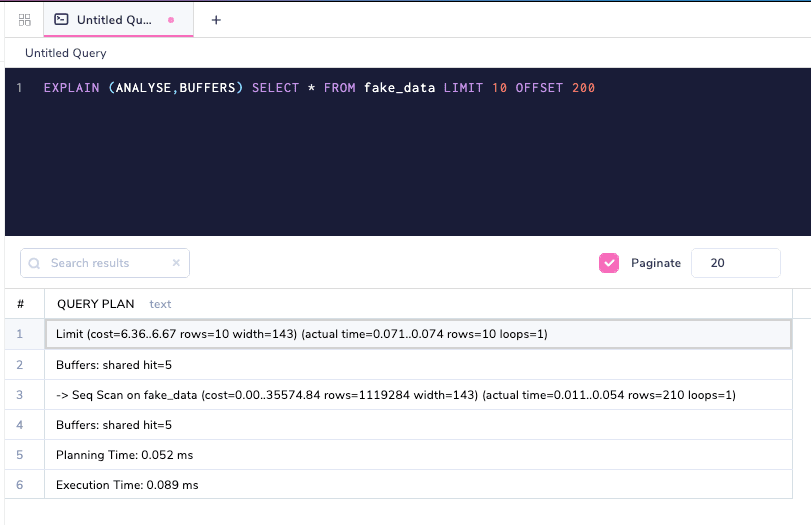 means that five pages were fetched from PostgreSQL cache itself.

Let's tweak the query to offset from different rows. 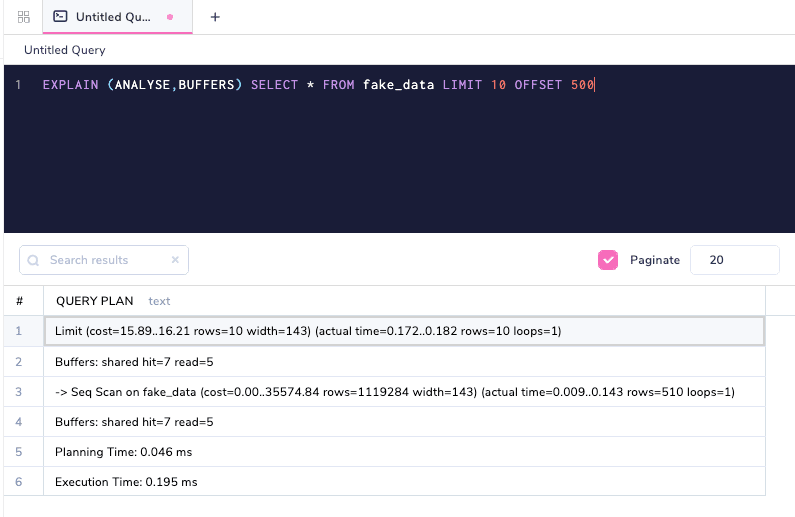 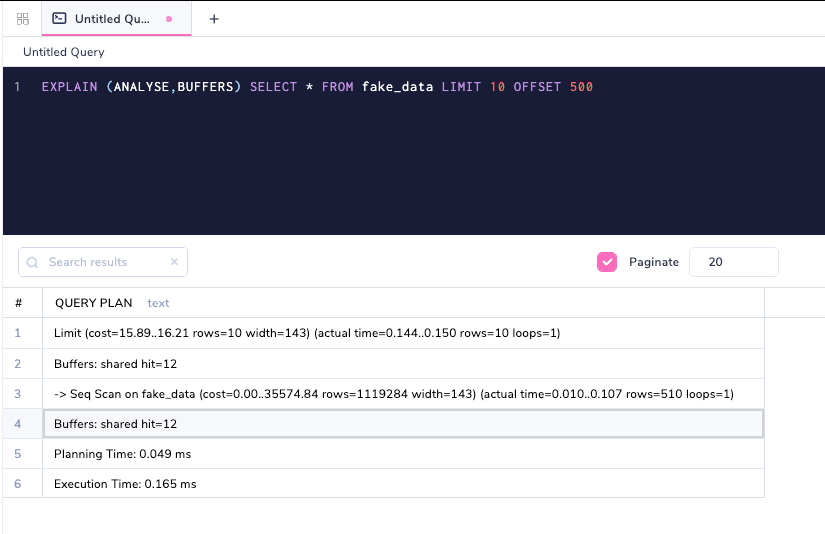 PostgreSQL uses a mechanism called a LRU (Least Recently Used) cache to store frequently used data in memory. Understanding how the cache works and its importance is a topic for another post, but right now what we have to understand is that PostgreSQL has a rock solid cache mechanism, and we can see how it works using the EXPLAIN (ANALYSE, BUFFERS) command.

Verbose is another command argument that gives extra information. 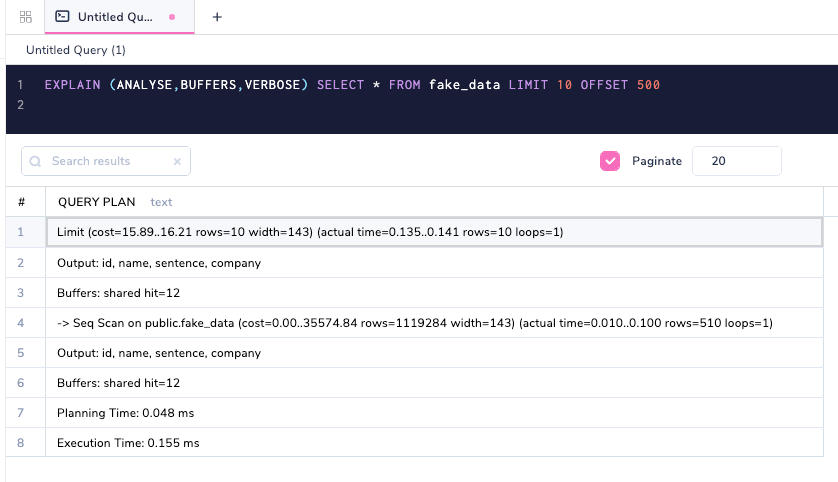 Notice that the Output: id, name, sentence, company is additional. In a complex query plan, there will be loads of other information that will be printed.

By default, the COSTS and TIMING option is TRUE as a setting and there is no need to specify them explicitly unless you want to set them as FALSE.

PostgreSQL has the ability to give the query plan in a nice format such as JSON so that these plans can be interpreted in a language neutral way.

Will print the query plan in JSON format.

There are various other formats

There are two other options called SETTINGS and WAL which can be included with the query plan, but these are out of scope for this particular post.

Basic Elements of a Query Plan

Any query plan irrespective of the complexity has some fundamental structure to it. In this section, we are going to focus on these structures, which will help us understand the query plan in an abstract fashion.

A query plan is made up of nodes:

A node can be thought of as a stage in database execution. Nodes are mostly nested as shown above; the Seq Scan is done before and on top of it, and then the Limit clause is applied. Let's add a Where clause to understand further nesting.

The execution happens from inside out i.e

As you can see, the database recognizes that only 10 rows are needed, and does not scan beyond once the required 10 rows have been achieved.

Note: I have turned off the SETmax_parallel_workers_per_gather =0;` so that the plan is simpler. We will explore parallelization in a later article.

Costs are crucial part of a database query plan, and these can be easily misunderstood because of how they are represented. Let's take a look again at the simple plan with costs. 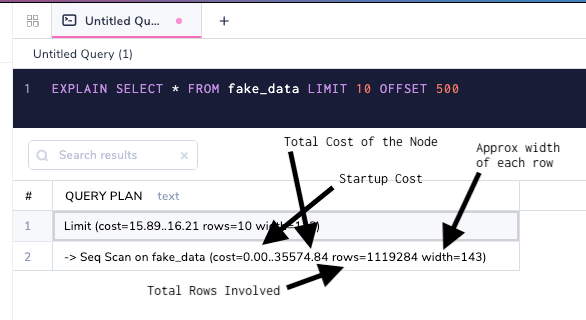 A few important things to note are:

If we actually run the query then the costs would make more sense.

Planning and Execution Time are metrics that are obtained only with the EXPLAIN ANALYSE option.

The Planner (Planning Time) decides how the query should run based on a variety of parameters, and the Executor (Execution Time) runs the query. These parameters indicated above are abstract, and apply to any kind of query. The runtime is represented in milliseconds. In many cases the planning time and execution time might not be close, and as in the above, planner might take more time to plan the query and executor is taking less time which is usually not the case. They don't necessarily need to match one another, but if they deviate a lot, then it's time to introspect on why it happened.

In a typical OLTP system such as PostgreSQL, any planning and execution combined should be less than 50MS unless it is a analytics query/huge writes/known exceptions. Remember, OLTP stands for Online Transaction Processing. In a typical business, transactions usually run from thousands to millions. These execution times should always be watched very carefully, as these smaller costlier queries might sum up and add as huge overhead.

We have covered topics ranging from query lifecycle to how the planner makes its decisions, I have deliberately left out topics like node types (scans, sorting, joins) as they would require dedicated articles of their own. The goal of this article is to give a broad understanding of how the query planner works, what influences its decisions and what tools PostgreSQL provides to understand the planner even better.
Let's revisit the questions we asked above.

Q : Why do we even need a query plan?
A : “A Fool with a Plan is better off than a Genius without a Plan!". A plan is absolutely necessary to decide what path to take, particularly when the decision is made based on stats.

Q : Is PostgreSQL not smart enough to optimize my queries automatically? Why should I worry about the planner?
A : PostgreSQL is actually as smart as it can get. The planner is getting better and better with each release, but there is no such as a fully automated/perfect planner. It is actually not practical since an optimization might be good for one query but bad for another. The planner has to draw the line somewhere and give a consistent behavior and performance. A lot of responsibility lies with developers/DBAs to write optimized queries and understand database behavior in a better fashion.

Q : Is the planner the only thing I need to look at?
A : Definitely not. There are a lot of other things such as domain expertise of the application, table design and database architecture etc., which are very crucial. But as a developer/DBA understanding and improving these abstract skill sets are extremely important for our career.
With this fundamental knowledge, we can now confidently read any plan and form a high level idea of what is happening. Query optimization is a very broad topic and would require knowledge in a variety of things happening inside the database. In further articles, we will see how different kinds of queries and their nodes are planned and executed and what factors influence the planner's behavior and how we can optimize them. Stay tuned.

Once suspended, rettx will not be able to comment or publish posts until their suspension is removed.

Once unsuspended, rettx will be able to comment and publish posts again.

Once unpublished, all posts by rettx will become hidden and only accessible to themselves.

If rettx is not suspended, they can still re-publish their posts from their dashboard.