There are countless libraries for generating charts on the web. Each serves a slightly different niche, but all of them have one thing in common: they require JavaScript.

That makes sense, of course — often your charts will depend on data that must be fetched over the network with JS, or will be rendered to a <canvas> element. But it's not ideal. Not everyone has JS, and in any case relying on it means that you'll be left with a chart-shaped hole in the page until it loads, which you can only really get away with if all your dataviz is tucked away below the fold.

For a recent New York Times article, I wanted to see if it was possible to create SVG charts that would work without JS.

Well, it is. I haven't seen the same combination of techniques used elsewhere, so I figured I'd write up the process. I've also created an experimental Svelte component library called Pancake to make these techniques easier to use.

Creating an SVG line chart (we'll come to other chart types later) is actually rather simple. Suppose we have a series like this...

Typically, of course, you'd use a scaling function rather than calculating the coordinates manually:

Throw in some axes and some styling, and we have a chart:

That logic could all live inside a Node.js script, meaning this chart could easily be created without any client-side JS.

But it won't adapt to the size of its container — it will always be a 300px by 100px chart. On most websites, that's a problem.

The solution (part one)

We can pick a simple coordinate system, like this...

...and project our data into it. Now, our chart adapts fluidly to its environment: 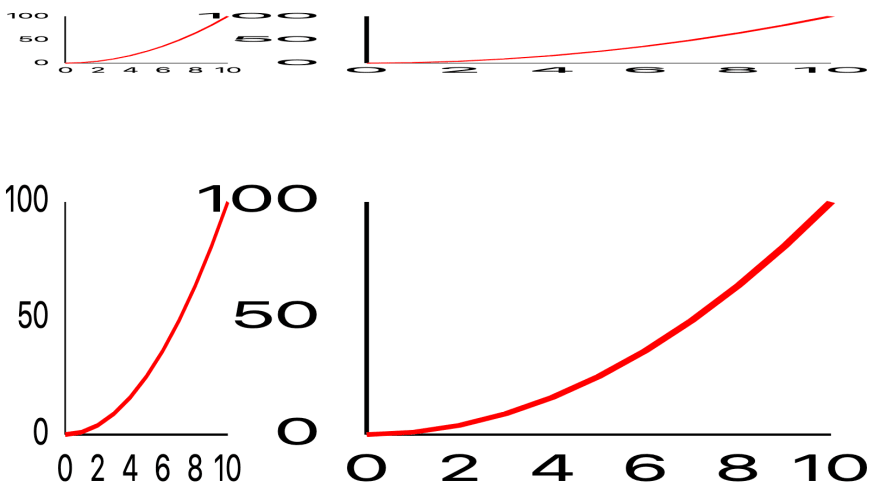 But it's obviously broken in two important ways. Firstly, the text is horribly scaled, to the point of being illegible in some cases. Secondly, the line strokes are stretched along with the lines themselves, which looks dreadful.

The second of these issues is straightforward enough to solve with a little-known CSS property — vector-effect: non-scaling-stroke — applied to every element: 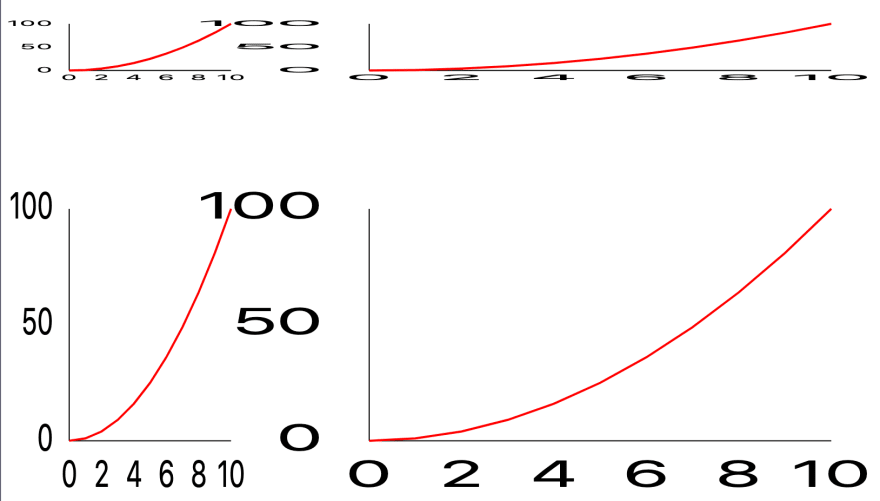 But the first issue can't, to my knowledge, be solved within SVG.

Instead of using SVG elements for the axes, we can use HTML elements and position them with CSS. Because we're using a percentage-based coordinate system, it's very easy to keep the HTML layer and the SVG layer glued together.

Recreating the axes above with HTML is as simple as this:

Our charts are no longer borked: 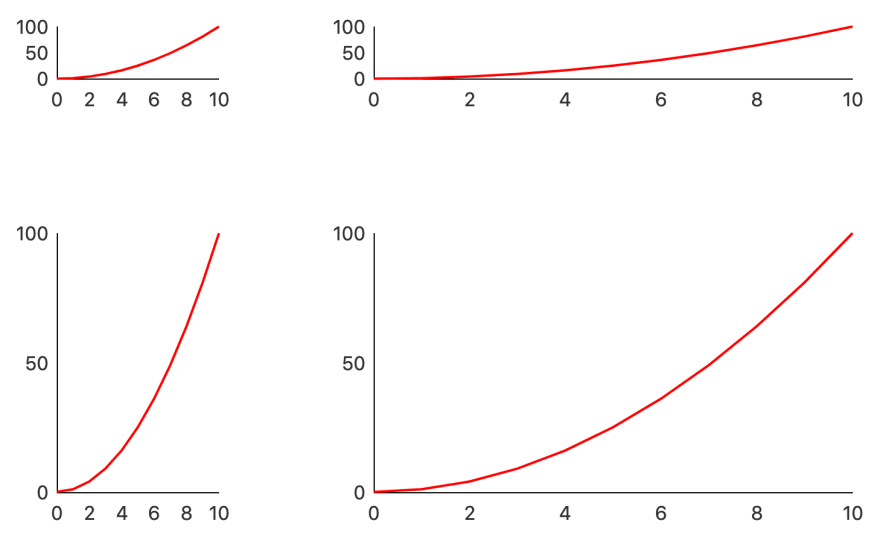 Another benefit of using HTML elements is that they automatically snap to the nearest pixel, meaning you don't get the 'fuzzy' effect that tends to happen with SVG elements.

This solves the problem, but there's a lot of manual busywork involved, hence Pancake. With Pancake, the chart above would look something like this:

Because we're using Svelte, this chart can easily be rendered at build time with Node.js, or be injected into the DOM using client-side JS. For charts that have some interactivity (such as the big example chart on the Pancake homepage), you might want to do both — serve the basic chart with your HTML, then progressively enhance it with interactivity by hydrating the initial DOM. This is something that's rather difficult to do without a component framework like Svelte.

Notice that Pancake isn't actually creating the <span> and <path> nodes that comprise the chart. Rather, the components are primarily logical — you bring the markup, meaning you have fine-grained control over the appearance of chart elements.

We can do much more than simple line charts:

Scatterplots are particularly interesting. Because we can't use <circle> elements — they would stretch, like the line and text elements earlier — we have to get slightly creative. The <Pancake.Scatterplot> component generates a path of disconnected arcs with a radius of zero. By rendering that path with a stroke width, we can make it look as though we're plotting circles.

Because we're in a Svelte component, we can easily introduce motion into our charts, as in this small multiples example. We can also add things like declarative transitions with a minimum of fuss.

Interactivity can also be handled declaratively within a Pancake chart. For example, we can create a quadtree (borrowing heavily from D3) that lets you find the nearest point to the mouse:

At the New York Times we're using a very similar technique to create JS-less maps tracking the coronavirus outbreak. There's a bit more to do, but it's likely that this work will be folded into Pancake eventually.

In future, the library will likely add support for rendering to a canvas layer (both 2D and WebGL). Charts that use <canvas> will have a hard dependency on JS, but it's necessary in cases where you have more data than can be rendered with SVG in a performant way.

This is still somewhat experimental; it hasn't been battle-tested to anything like the degree that existing charting libraries have.

Its focus is on managing the coordinate system for two dimensional charts. That's enough for line charts and bar charts and scatterplots and stacked area charts and what-have-you, but if you need to make pie charts you will have to look elsewhere.

For now, there's no documentation, but the homepage has examples you can crib from. It's possible that APIs will change as we encounter more real world problems.

The name 'Pancake' comes from the fact that charts are built by stacking layers on top of each other. I'm deeply indebted to Michael Keller for creating Layer Cake, which Pancake draws a lot of inspiration from, and from where I ripped off some of the example charts linked above. Michael also reported the story linked above, giving me a reason to create Pancake in the first place.

I'm also indebted to Mike Bostock, of D3 and Observable fame, for sharing the insights, examples and code that make projects like this one possible. The handful of examples on the Pancake homepage are shamelessly copied from the D3 examples page, which is a goldmine for anyone looking to test out a new charting library.

Once suspended, richharris will not be able to comment or publish posts until their suspension is removed.

Once unsuspended, richharris will be able to comment and publish posts again.

Once unpublished, all posts by richharris will become hidden and only accessible to themselves.

If richharris is not suspended, they can still re-publish their posts from their dashboard.

Once unpublished, this post will become invisible to the public and only accessible to Rich Harris.

Thanks for keeping DEV Community 👩‍💻👨‍💻 safe. Here is what you can do to flag richharris:

Unflagging richharris will restore default visibility to their posts.