Before we get into the technical web programming stuff, let's look at the history of the internet, how it works, and its components. We will also go through the "how it works" and the components of world wide web (www) as well.

So what is it? To simply put, the Internet is the largest network in the world which connects many networks all over the world, and communicate by the policy called TCP/IP. Now for the history of the internet, I'll leave this video below! (Thank Melih Bilgil for this awesome video!)

Oh, and I'll leave the "1980 Documentary About Personal Computers" video here in case you are curious about the evolution of our computer. *thumbs up*

Ok, after we had a look at its history and origin, let's look at the internet components next. It is mainly composed of three things; the client(s), the server(s), and the network. Pretty straightforward, isn't it? Here's the picture of how it works (click the image to go to the source xD) 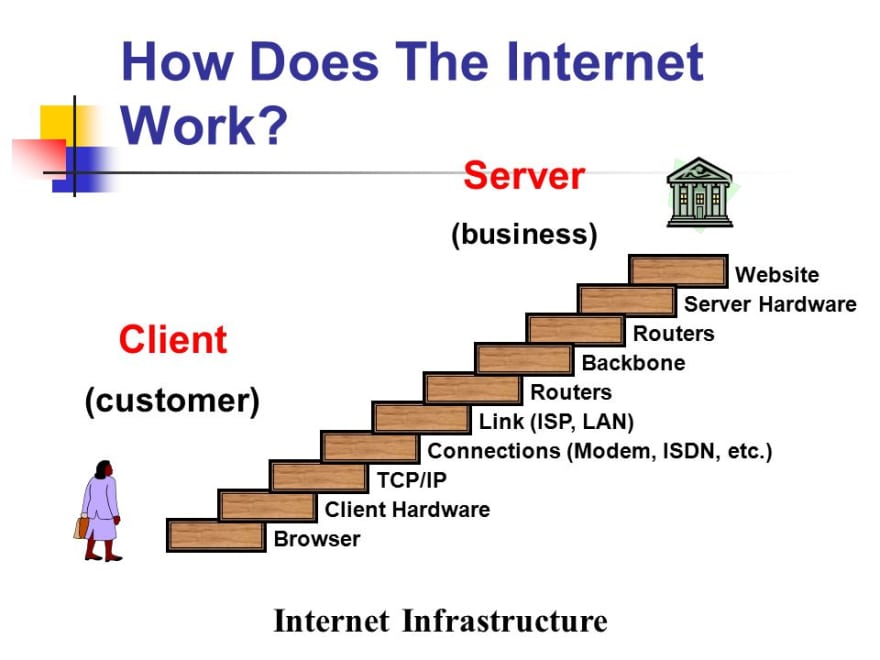 Let's look at some essential vocabularies:

TCP or Transmission Control Protocol, its job is to break down the data into small size chunks called "packets", and combines these packets when they arrive.

IP or Internet Protocol routes the packets to the destination.

Services and Ports, so TCP/IP defines a number of "channels" that a service (server) used for data transferring to/from the clients.; these channels are called "ports".
All internet services work on top of TCP/IP protocols, and have their own specific port numbers and protocols; e.g. HTTP's port is '80'.

Domain Name is (roughly) a text label version of IP Address, it is hierarchical structures. DNS or Domain Name Server is a server that provides service to translate between IP addresses and the 'user-friendly' domain names; e.g. www.google.com, the domain name, has 66.249.89.104 as an IP address.
Here's the domain name hierarchy:

World wide web, or www for short, is a service designed to allow easier access to the information on the internet through the use of graphical user interfaces.

Let's take a look at another set of essential vocabularies:

Web browser is a program displaying the pages at the clients it contains instructions on how contents (HTML Markup tags, CSS, etc.) be displayed; e.g. Chrome, Firefox. It fetches a web page from a server by an HTTP request containing URL of the page.

URL or Uniform Resource Locator(s) is a string used to identify a resource of service on the internet (not just web pages).

AND we're done with the introduction of the internet and the www. Before ending this article, I would like to write down what we (or at least I) are going to learn in this web programming course.

Hey ya! Just another girl who codes ;) Still new and learning (hopefully I'll be getting better and learning soon)