Recently, during the migration to React 17, I had a problem between event listeners handled by React and one added on document manually. It was due to the part Changes to Event Delegation of the React 17 release note.

At this moment I understood that I had a misconception of how React handles event listener. So I decided to explore the React code to understand how it works.

Spoiler alert: I will simplify a lot the process made by React to make the article easier to read and that you don't quit it before the end :D.

Before going deep in the React codebase, I would like to explain what was in my head about the management of event listeners.

For example when I write this simple code:

In my head, React was doing under the hood, something like:

How it really works

After reading the React 17 release note. I was like "What? React was attaching event handlers on document and now on rootNode".

Ps: All this article will be based on the version v17.0.2 of React.

React initializes at runtime multiple objects to know how to handle event listeners. For example there are:

*Note: * There are also a notion of priorities, but we will not talk about it in this article:

Actually the event handlers registrations, are made during the creation of the root Fiber node.

Let's look at the entry point in your application, where React is initialized:

The code behind the ReactDOM.render handles at the same time the creation an the update of the Fiber tree.

How does React know if it needs to create the Fiber tree?
Actually React store in the root DOM node, a key named _reactRootContainer. You can get it in your browser by typing:

SO if there is a value the Fiber tree has been already created otherwise let's create it.

Finally during the creation, all the events that are handled by React are looped to create event listeners linked to the root DOM node:

What are the added event listeners?
By going a little deeper in the code, we can see that the listeners call a same method named dispatchEvent (with different priorities) that will handle the event.

This is the method that we will talk about in the next part.

And now we can see in the browser that React added the listener to the root DOM node in developer console: 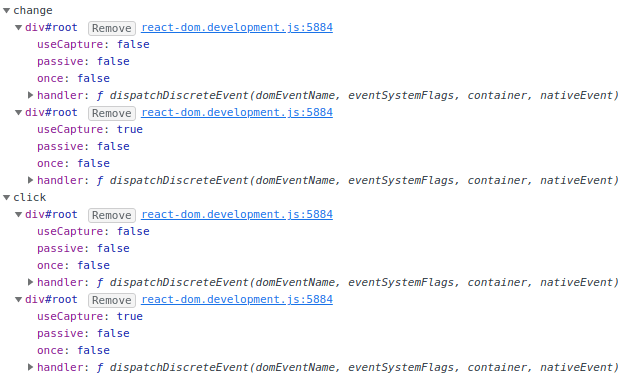 Trigger of this event handlers

Now that we know how and where React add event listeners. The question we can ask to ourself is: "How the callback I put on the onClick property of my button is called".

We need to know some magic that React does on DOM nodes.

Actually React puts on DOM nodes a reference to the Fiber node under a dynamic key named [internalInstanceKey] and the props under the key [internalPropsKey].

*Note: * If you want to know values of internalInstanceKey and internalPropsKey (and that you don't have a smart console that helps you with autocomplete) you will have to add a debugger point on react-dom code to get it.

How to go into the react-dom code?
You will need to install the React Developer Tools and then follow this little gif:

Then after refresh, we finally can get the wanted values:

Warning: If you refresh again the page, it will not be the same values!

With the following example, what does it happen when clicking on the button:

We have seen previously that the listener added by React will call the method dispatchEvent.

Note: The target will be the clicked element and the currentTarget the root DOM node element (on which the event listener is applied).

From the clicked Fiber node, we can go up in the Fiber tree until the root node.
For each Fiber node, React watch if the component is a HostComponent (ie a htnml element) and if there is a prop corresponding to React event handler thanks to the object reactEventHandlerPropByEventName, in our case we search onClick prop. This listeners are stored in an array named dispatchQueue.

Note: Basically it traverses the Fiber tree node, from the target node to the root node element.

Here is a little gif to understand the process that gets listeners and fills the dispatchQueue:

Then this dispatchQueue will be processed by executing these listeners in order:

If you put a debugger point, in the onClick method of the button. You can see that the type of the event is not a MouseEvent but a SyntheticBaseEvent

Indeed React wraps the native event, into a React event:

Why are nativeEvent wrapped?
It helps reducing cross-browser inconsistencies.

When you put an onClick on a button, React will not add an click event listener on the DOM element. React, at the first mount,
only adds event listeners (with capture mode too) on the root node.

Then when the user trigger the event, the event listener of the root node, is called.
Thanks to the target property of the event, React can get the Fiber node because it puts reference to Fiber nodes on
DOM elements into a dynamic key of the form _reactFiber....

From that Fiber node, React goes up in the tree, to get all listener that match the React event name and put them in an
array (a dispatch queue). Then all the callbacks from that queue are executed.

If you want more information about it with links to React code, you can see my gist.

Once suspended, romaintrotard will not be able to comment or publish posts until their suspension is removed.

Once unsuspended, romaintrotard will be able to comment and publish posts again.

Once unpublished, all posts by romaintrotard will become hidden and only accessible to themselves.

If romaintrotard is not suspended, they can still re-publish their posts from their dashboard.

Once unpublished, this post will become invisible to the public and only accessible to Romain Trotard.

Thanks for keeping DEV Community 👩‍💻👨‍💻 safe. Here is what you can do to flag romaintrotard:

Unflagging romaintrotard will restore default visibility to their posts.