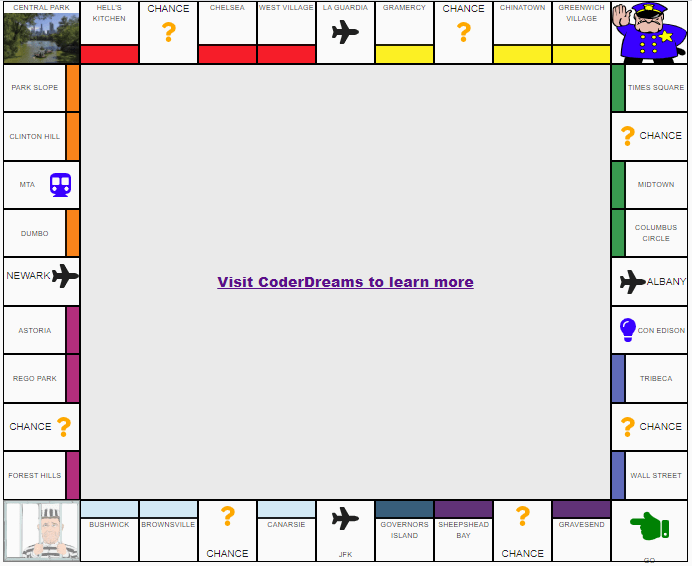 I’ve been working on a Monopoly game with a customized rule set and more gameplay options for players to try different strategies. I feel the standard rules make the game mostly based on luck.

It’s been a lot of fun so far mostly because it’s different from the stuff I usually work on and I’ve been learning a lot. Specifically React, CSS grid/flex, NodeJS, Express, Socket.IO, and more. I think the biggest challenge is getting the networking code to work right and to deal with slow/lagging connections, disconnects, and so on.

I want to share some early React/CSS code for displaying the game board, you can see it here.

You can also find the full source here

One of the features of the game will allow players to create and save their own themes. Other players will be able to select from a list of existing themes. The demo is NYC-themed and you will be able to create your own by giving custom names to the squares.

Instead of having the player that lands on a square immediately purchase it, there will be a new auction system. There will also be more trading and negotiation possibilities between players including loans and rent forgiveness.

If you’re familiar with RPG video games, there will be some elements of that as well. Similar to collecting $200 when you pass GO, each player will also receive ability points they can put into a variety of categories.

The GameBoard component renders a set of GameSquare components. Each square is assigned an id that used to lookup configuration data. SquareConfigData configures various properties for each square such as color, position, type, and group.

The components in the squares folder are different display implementations that are used by the different square types.

From PHP to JS ecommerce: Migrate from Magento and stay open source 🤩

Roman Sery
I’m a seasoned full stack web developer experienced with many different technologies. Software development is constantly changing and evolving. That’s what makes it so exciting, but you must know what
Launching LetsDefinitely.com – A dating website, feedback wanted
#showdev #java

Once suspended, romansery will not be able to comment or publish posts until their suspension is removed.

Once unsuspended, romansery will be able to comment and publish posts again.

Once unpublished, all posts by romansery will become hidden and only accessible to themselves.

If romansery is not suspended, they can still re-publish their posts from their dashboard.

Once unpublished, this post will become invisible to the public and only accessible to Roman Sery.

Thanks for keeping DEV Community 👩‍💻👨‍💻 safe. Here is what you can do to flag romansery:

Unflagging romansery will restore default visibility to their posts.