This is the second in a series of posts detailing how I built the 🥑 Rotavo PWA. Give it a whirl and see what you can draw!

In the previous instalment we built the touch-controlled <input-knob> component that let us create a rotating knob with a value attribute corresponding to its angle. However, fun as that might have been it's still missing some functionality to be practical for general use.

First though, let's freshen up the previous demo with a few cosmetic improvements. I said we were going to build something that resembled a volume control knob on a stereo. Now, we got the rotating behaviour in there but our knob was square... traditionally they're round. You were all kind enough not to mention that, but we should fix that before we move on.

We also want an indicator for which way is "up" on our knob. As we saw in the final demo last time, we can just add any content we need inside the element. So we'll drop in a little triangle indicator there:

We then need to style that so it's central:

The primary change on the control is using border-radius to round off those corners. We're also going to put the shadow on the outer input-knob element as that does not rotate. If we had the shadow on the inner ::part(container) it looks as if the shadow moves around the element instead, which is not the effect we're after.

Rounded corners! The original CSS holy grail - revel in it.

There is also a little improvement we can make to the styling of :host on our Shadow DOM template as well. Specifically, we want the cursor to change into the little 👆 pointer indicating to the user they can interact with it.

Now we've added a little polish to our element, we've got something visually pleasing but it's hard to react to any changes when the user interacts with the element. In the same way that we listen for Pointer events inside the element, we want to emit our own events in order to respond to them in the wider application.

Much like the Pointer events, we want to track the beginning, middle, and end of the interaction. That means we will create three Event types:

We're going to emit these events at the end of each handler inside of the element, because we want to be sure that we've done all the necessary work inside the element before anything attempts to process the event.

Note, we need to make sure we specify bubbles: true because our listener is going to be a parent element. You can try removing this and you'll see the event never "bubbles up" to the parent nodes.

With these events firing, we can listen for them just like any other:

Take a peek at the demo below to see how we're using the logEvent() function to light up some <span> elements when the events fire.

⚖️ Have some sense of proportion

Currently the value of the element maps directly to its angle. If we had a volume control that went from, say, 0 to 11 then that's what we want the value to match. Otherwise we're forcing our developer to do the conversion from the angle to the value themselves, which is just rude. To address this, we'll add a scale attribute where our developer can specify the value for a full rotation.

First, let's add that new attribute to the element. We want the usual attribute-to-property mirroring, however a little note - our default value is 1 as scale will be a multiplier and multiplying by 0 will always give us... well, 0 again. Let's drop that in:

However now value and _angle are dependent on scale, so we have a bit of linking up to do. Whenever one of our attributes changes, we need to make sure we recalculate:

So, if our scale is 10 and our value is 5, then that should be half a rotation on the knob - or an _angle of π - or pointing straight down.

The matching part is now when the _angle changes, we also need to update the value.

As a little bonus, take a peek at the CSS in this demo. The layout uses a CSS Grid layout with grid-template-areas where you basically draw a little text diagram of the layout you want. So, the arrangement of the items above is literally:

Would I recommend this in production? Who knows... I mean, I've seen far worse.

While there's a certain whimsical freedom in being able to spin the knob infinitely, every so often we have a need to set some limits. A volume control would make no sense if it allowed values below zero, and if you can go higher than 11 - well, who knows what the consequences might be.

Let's set up some attributes to hold the minimum and maximum limits for the element, appropriately named min and max. This is, hopefully unsurprisingly, the same as the scale attribute we added earlier.

The default value is null since we won't want to enforce the limit if it's not set. In other words, if the attribute is null:

That means instead of just calculating and setting the _angle and value we need to check if they're within the bounds first. The calculations stay the same, we're just renaming to _attemptedAngle and _attemptedValue. Then we check to see if the limit is set that our attempted value is on the right side of it before we transfer the value over.

With that logic in place, now we can add a knob that restricts its movement between two values:

Give it a go in the demo. Spin all you like, but those upper values are all off limits! ⛔

If you're the type of engineer whose natural inclination is to immediately break the lovingly crafted code in front of you, then you may wondered, "what happens if max is higher than the scale?" Luckily, nothing breaks per se but it does make that max value a bit meaningless as we can never reach it. Well... unless we can count the number of rotations. For example, one complete turn gets us to 10, another complete turn gets us to 20, and so on. Think of it like a winch or a crank pulling a bucket out of a well - as you turn the crank, the rope winds in or out until it reaches the top or bottom.

We're not going to expose _rotations as an attribute since it's a result of value and scale. If we did have it there, we would need to introduce some confusing precedence rules about what happens if you set things that conflict and... eugh, I'm not touching that. Anyway, let's get that derived _rotations value initialised when the element is connected. 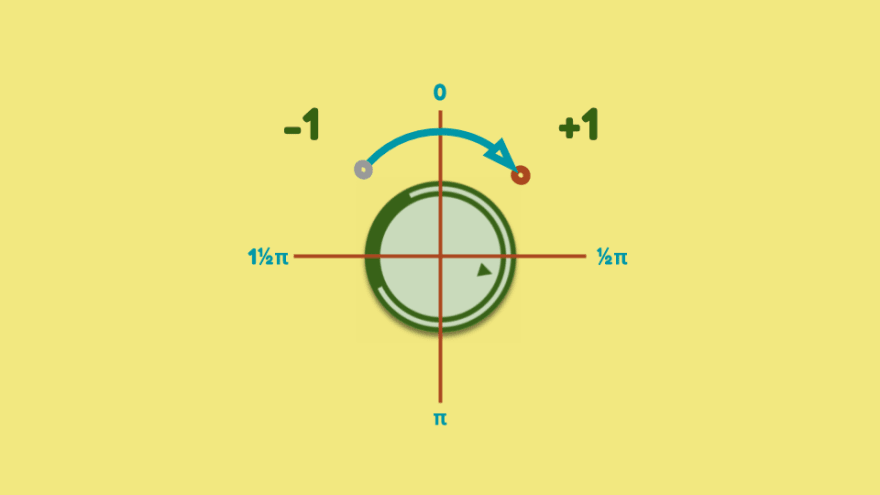 Moving in or out of the lower quadrants is going to just be movement within the same rotation. This change means we need to track the previous angle so we have something to compare against when we calculate the new one.

The last bit to consider before we look at the code is that we now effectively have two modes of operation for our element. The first we've seen - spin the knob and once you go over the upper scale then you loop round to 0. However, now we're tracking rotations we've got a value that increases on every rotation. It's probably not a good idea to have a control that lets the user increase the value to infinity, so we should ensure that's bounded in some way. That means the check we're going to add is that we will only track _rotations if the min and max values are set. I know, I know - we're not currently validating those attributes at all... but, I've got to save some content for the next article!

Right, let's step through tracking that change in rotation:

Then using the same listener for knob-move-change we update those values:

Now 10 rotations of the element should take you all the way from 0 to 💯. Ideal place to wrap things up for this entry, I think.

Next time we are going to ensure our component is accessible, because while the touch input is fun - it's not an option for everyone.

Oh ho, I couldn't leave you without a little treat at the end now, could I? So, continuing the somewhat dubious tradition of borrowing my colleagues' faces (thank you / apologies to Jake Archibald) please feel free to discover what happens when you wind up this... "Jake in a box".

Once suspended, rowan_m will not be able to comment or publish posts until their suspension is removed.

Once unsuspended, rowan_m will be able to comment and publish posts again.

Once unpublished, all posts by rowan_m will become hidden and only accessible to themselves.

If rowan_m is not suspended, they can still re-publish their posts from their dashboard.

Once unpublished, this post will become invisible to the public and only accessible to Rowan Merewood.

Thanks for keeping DEV Community 👩‍💻👨‍💻 safe. Here is what you can do to flag rowan_m:

Unflagging rowan_m will restore default visibility to their posts.