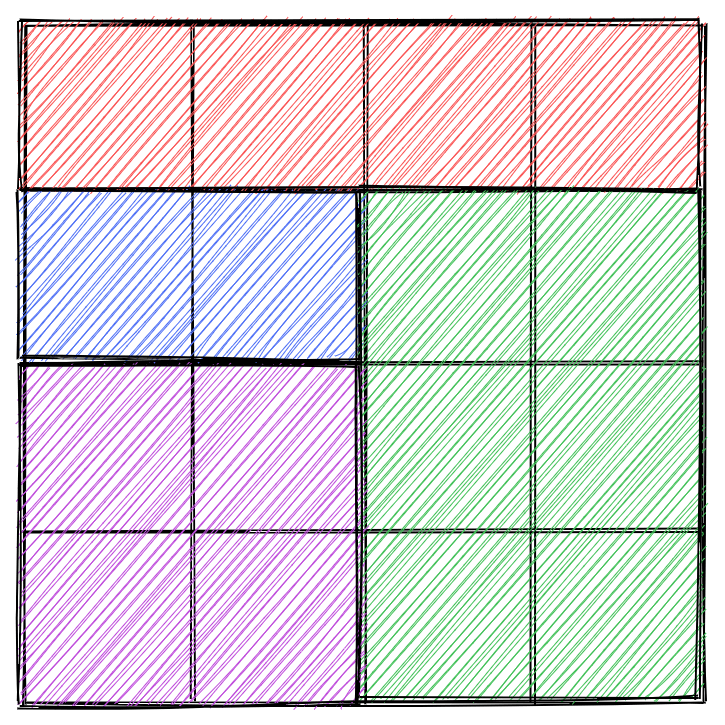 CSS Grid came into the limelight recently(a few years ago) but its presence has been there since old IE days. CSS Grid solves the problem area of two-dimensional layouts. There have been multiple attempts to solve the designing layout using other properties in CSS - position hacks, floats, table, flex are such very popular examples with comes with their own set of problems. 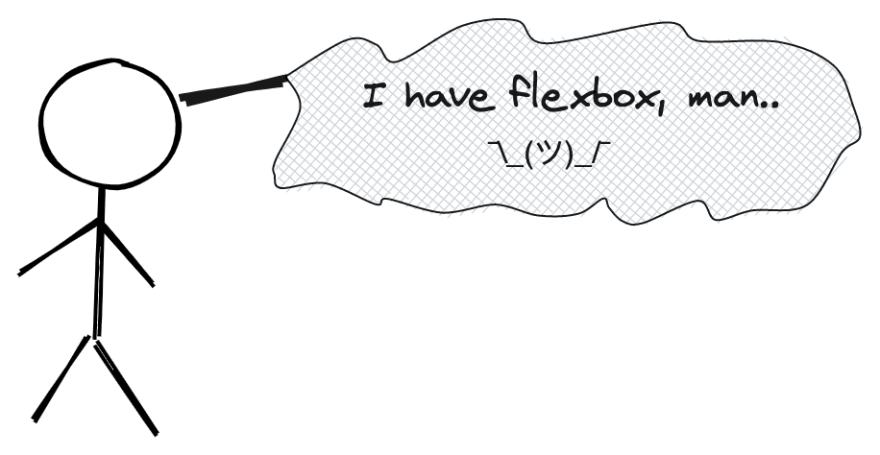 Syntactically and visually, we can achieve the 2D layouts using flexbox or tables then why do we need a grid in the picture? Grid brings a very unique quality with itself – Semantics. Tables are semantically for table layouts or tabular structured data, flexbox is semantically there for 1-dimensional flexible layouts (navigation bars, etc). In that same essence, Grids are for 2-dimensional layouts.

CSS is a declarative language, when you need something to be of let's say red color. You declare it as color red by adding a declaration color: red; 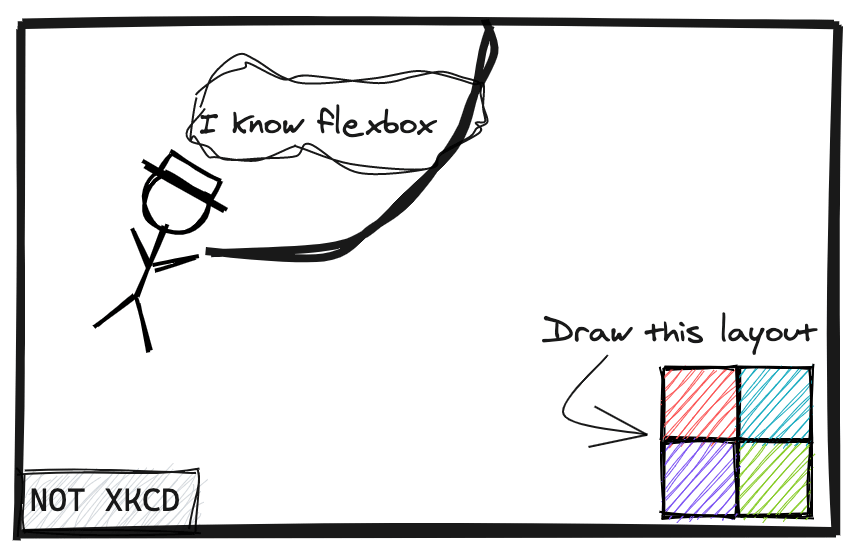 excuse this poor imitation of xkcd, the original one for regex is a lot better - https://xkcd.com/208/

When the grid was not available we used tables and flexbox to create grid like layouts which was not semantically correct and also hard to pull off in some way. Tables and flexbox usages still hold place today for what they were meant to be. In the end, CSS Grid is just another tool in our toolbox. And as the saying goes - use the right tool, for the right job. It blends well with other layout systems like it is perfectly valid to create a flexbox container inside a CSS grid element.

In this post, we will uncover the very fundamental terminologies of the CSS grid that we need to get acquainted with, and then in upcoming posts, we'll dive into other aspects. 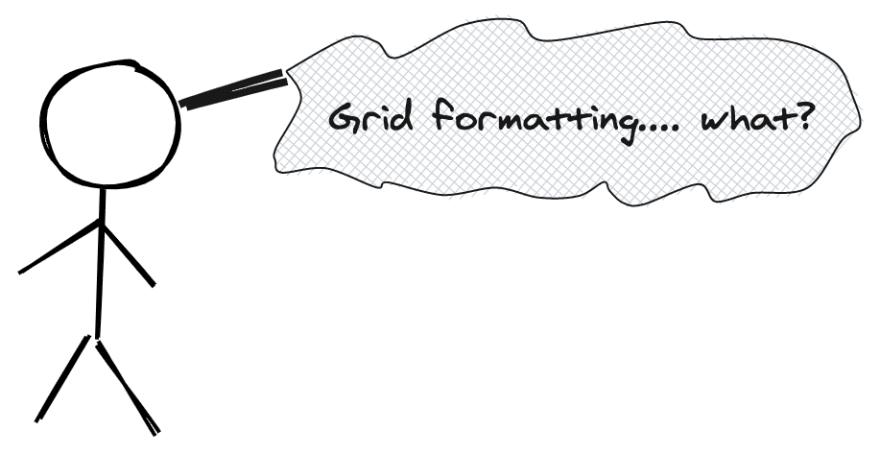 To answer that, let's understand what is formatting context in general. Formatting contexts define the rules on how the content is going to layout visually and with the combination of other properties, how it affects the layout. This is not something new in CSS, it has been around since the beginning. You may not have known the term before, but for sure you have experienced it.

There are many helpful resources available on internet to understand formatting context. I would recommend an introductory article on MDN and this article by Rachel Andrew on CSS Layout And The Block Formatting Context

We can create grid containers in two fashion – block-level and inline-level. Block-level grid follows the block direction (top-to-bottom for most languages) and gets placed on its own line like a div, section, p. Inline level grid, follows the inline direction (left-to-right) placed along with other inline elements for eg. span, strong.

📌 If an inline-grid container has position: absolute; or float in its properties, then inline gets dropped and it becomes a regular block grid container.

Block grids look like they behave similar to the regular block containers which are created by elements such as - div, main, section, etc... But there are few differences between block-level grid and block containers:

Interaction with floated elements — When a parent element contains a floated element, the child div (or any other block element) goes under the floated element. But in the case of the grid container, it does not. Check out the pen below.

Margin collapsing — Grid containers do not collapse vertical margin, whereas block elements do. Margin collapsing is itself an interesting topic. To know more about margin and margin-collapse and how it affects layout, check out this super awesome post again by Rachel Andrew - Margins in CSS 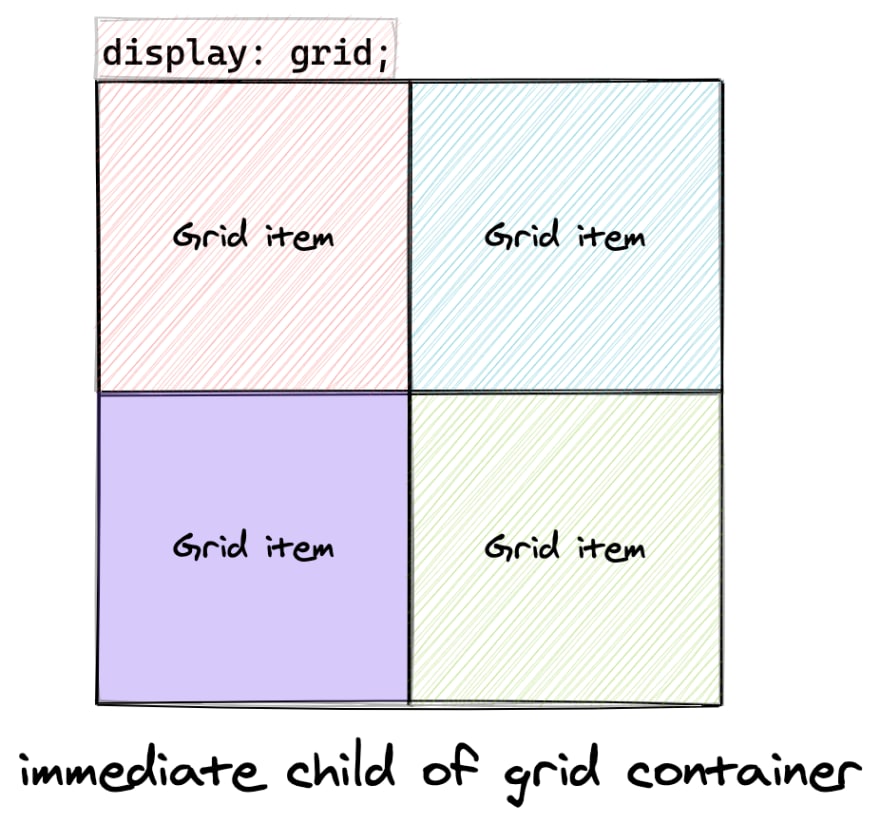 There is no such restriction on defining the layout of grid items. A grid item can be a flexbox container by adding declaration display: flex;. Heck, we can go ahead and add display: grid; to the grid item, and it behaves as a grid container for its child item! This means it behaves as a grid-item for its parent and grid-container for its children. You can call it a nested grid. (not subgrid - that's different) 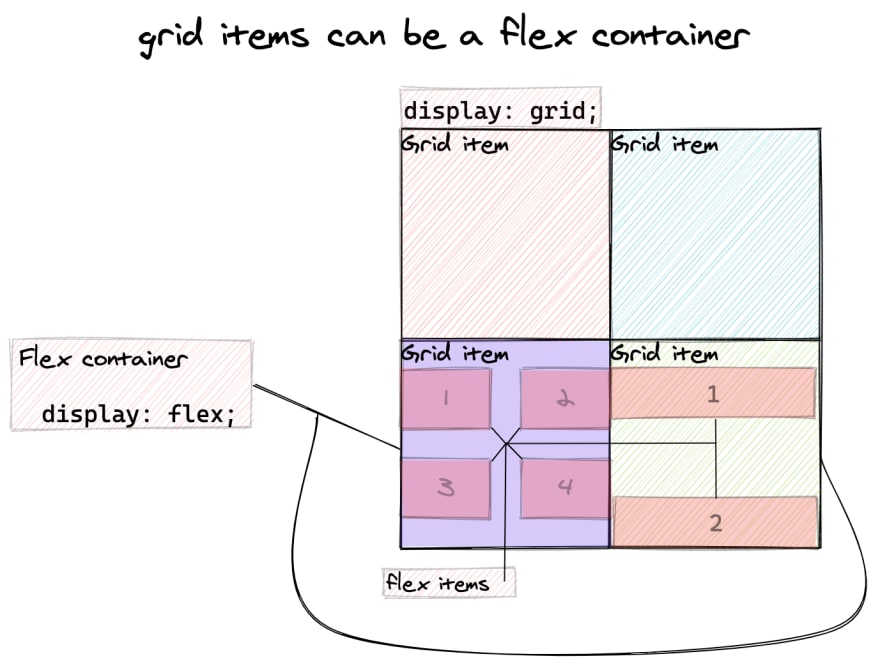 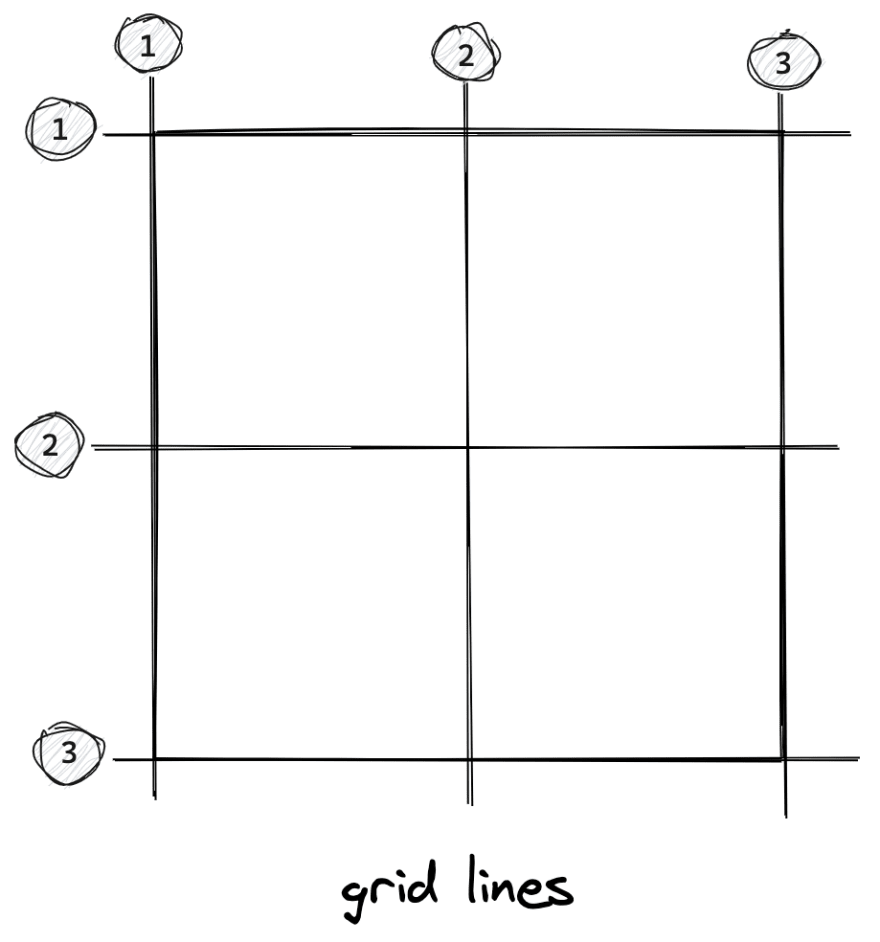 We can refer to the grid lines as numbers via CSS and place the grid items. They start as 1 from the starting edge of flow direction. 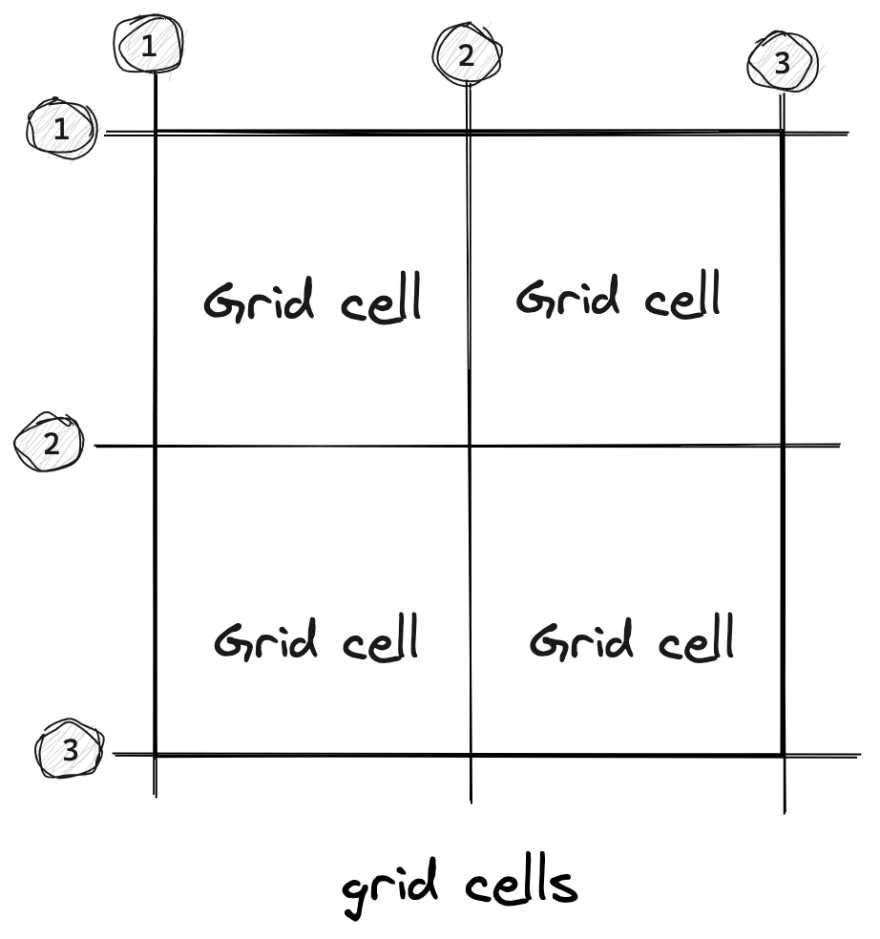 The area between 4 grid lines is called a grid cell, it is the smallest unit of area in a grid. 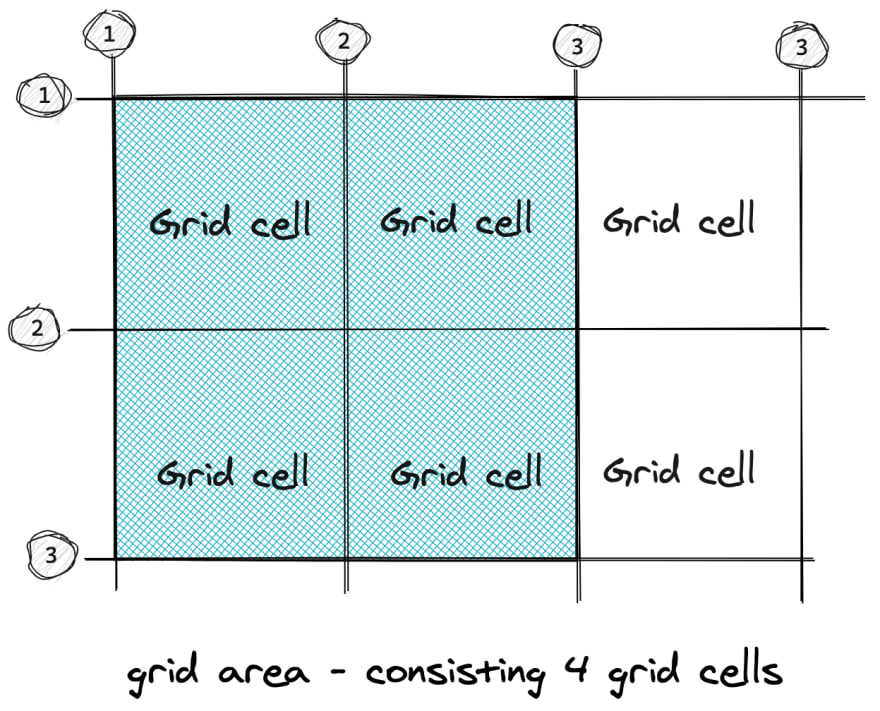 A grid area is the combination of one or more grid cells together. These are accessible via CSS grid properties. We can define the grid areas and place our grid items over those areas.

Since the control of assigning grid items to grid areas is on us, we can keep some of the grid cells as empty or overlap them with other grid items.

If we don't define any grid area, a default grid area will be created from start to end and our content will be placed on it.

Here is how we define 3 columns and 2 rows with their corresponding track sizes.

Here we have defined only 2 rows, those rows/tracks are part of the explicit grid. If the number of grid items increases which cannot fit inside the explicit area of the grid, then the grid will generate a new row automatically as part of implicit grid. Similarly for columns.

If we place a grid item outside of the defined row, columns. New grid lines and tracks will be created as part of the implicit grid.

How do we place grid items on grid areas? We'll cover that in the upcoming post.

🎨 All drawings were made using Excalidraw

Fresh – Is this new Javascript framework the Node-killer?

Once suspended, rvisharma will not be able to comment or publish posts until their suspension is removed.

Once unsuspended, rvisharma will be able to comment and publish posts again.

Once unpublished, all posts by rvisharma will become hidden and only accessible to themselves.

If rvisharma is not suspended, they can still re-publish their posts from their dashboard.