This is another part of an everlasting story in which someone, somewhere, thinks that the task at hand might better be automated. 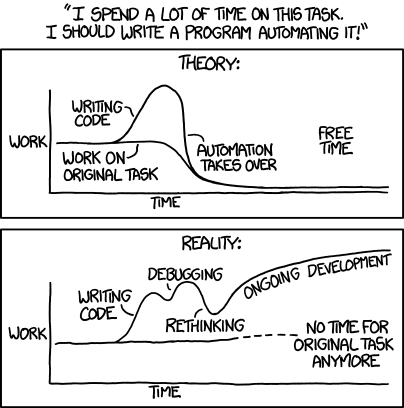 Currently I’m on par with my efforts, but you’re invited to keep on reading!

Back when I applied for my first job, which was around 2002 (time flies…), I had to write my first CV. And as soon as I got the job, I almost immediately forgot about my CV again.

Then the next time I needed an up-to-date CV, my previous efforts had long vanished, so it was time to do it all over again…

And the next time I needed an up-to-date CV, my previous efforts had long vanished, so it was time to do it all over again… Again…

And the next time I needed an up-to-date CV… Well, you know the story…

Fast-forward to today, I just updated my CV, which is what I do quite regularly since I learned the hard way that it takes some time to remeber what you did over the last years. But I also spent some time on my overall CV setup to make it more “enjoyable”.

Quite a lot of things changed since I had to write my first CV, and for most of the time I kept track of what I’ve been doing using a Word document and Dropbox / Ubuntu One etc. Around the time when I was about to finish my master’s thesis in computer science I began to think about creating a new CV. And since I like to keep track of things, it should be version controlled, so I created a new repository on my server and opened a LaTeX template.

Around the same time I started to overhaul my webpage, which resulted in my shell-like landing page and a more graphical version.

Both pages serve my CV for download, but with my initial setup I had to manually build both PDF documents to later manually copy them to the right place.

Doing things manually is rather cumbersome, so I started to think about automating the process…

The workflow to automate this job is quite simple:

All the magic is done via a simple post-update git hook, which in turn is just a simple shell script.

I decided to build a TexLive container, since the full package is rather large (the image has approx 2.9GB) and I don’t want to have it installed on my server just to build my CV.

It’s just a simple wrapper which mounts a local directory and runs latexmk on the passed file.

Now if the LaTeX build has been successful, the generated PDF files are moved to their public folder and my poor mans version of a CD pipeline is complete.

Great, another step towards containerizing all services on my private server!

Once suspended, s1hofmann will not be able to comment or publish posts until their suspension is removed.

Once unsuspended, s1hofmann will be able to comment and publish posts again.

Once unpublished, all posts by s1hofmann will become hidden and only accessible to themselves.

If s1hofmann is not suspended, they can still re-publish their posts from their dashboard.

Once unpublished, this post will become invisible to the public and only accessible to Simon Hofmann.

Thanks for keeping DEV Community 👩‍💻👨‍💻 safe. Here is what you can do to flag s1hofmann:

Unflagging s1hofmann will restore default visibility to their posts.