// This is the 23rd article of C# Advent Calendar 2018 in Japan.
// The original article is Roslyn の構文解析を使ってデバッガーを自作する.

So, as a result of trying to make prototype "Tick-tack Debugger" with WPF, it looked like this.
As an example, we are figuring out a square root by the Newton's method.

The following is an outline technical explanation.
Before creating a WPF application, first try a console application on the .NET Framework.
To use C# syntax analysis, install Microsoft.CodeAnalysis.CSharp via NuGet.

It is a policy to insert debugging code into the source code to be debugged, compile it dynamically and execute it.
The source code of the console application is shown below (the whole solution is in SyntaxTreeSample).

In the SyntaxHelper class, C# source code to be debugged is converted to a syntax tree and scanned, and a line of code for debugging is inserted before each statement.

By using the CSharpSyntaxTree.ParseText method, you can convert the source code to a SyntaxTree object.
Also, the superclass representing all nodes, such as methods, statements and expressions, is the SyntaxNode class,

if you know these members, you can scan nodes.

In addition to this, DebuggerLib is created as a class library that defines methods called from code for debugging.
Let this library go through to notify the position of each statement and, the variables and their values that exist immediately before it.

In the Program class, after saving the generated debugging source code to a file, compile it using CodeDomProvider in the System.CodeDom.Compiler namespace, and call its entry point (the Main method).
It also registers the event handler when the debug code is executed, and pauses the program for the specified time using the Thread.Sleep method.

Now, if the original source code to be debugged is Program.cs below, the following Program.g.cs is generated as the debugging source code.

When we run the console application we created, it will look like the following figure (the time interval is 0.3 seconds).

Based on the above, we created a debugging tool as a WPF application.
The part of the C# source code on the left is a TextBox and can be edited.
When debugging is executed, highlighting is done by setting each statement to the selected state.
The part where the variable list is displayed on the right is a DataGrid. 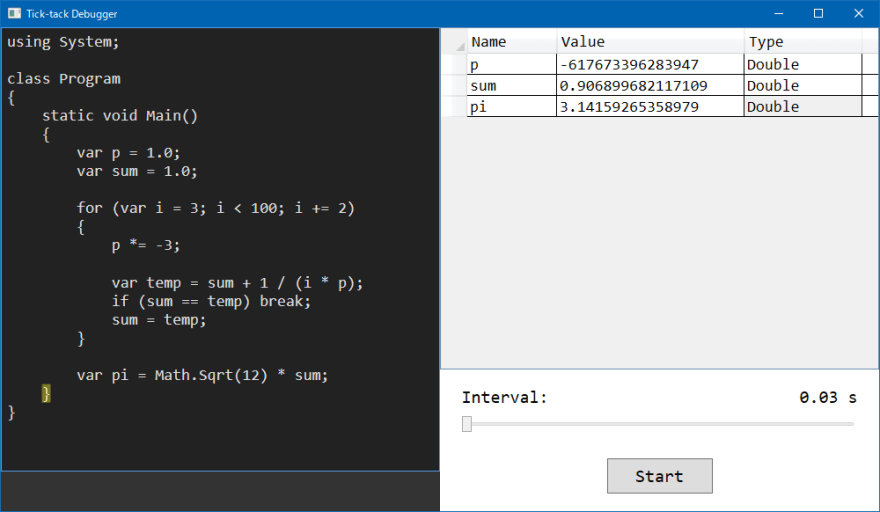 (An example of figuring out the pi)

This time I tried to make a prototype by the above method, but I think that there is a smarter way to insert debug code and compile.

The difference between Array and List in C# (Memory Usage + Performance)

Once suspended, saka_pon will not be able to comment or publish posts until their suspension is removed.

Once unsuspended, saka_pon will be able to comment and publish posts again.

Once unpublished, all posts by saka_pon will become hidden and only accessible to themselves.

If saka_pon is not suspended, they can still re-publish their posts from their dashboard.