When i was working with the EmberJS webApp, i got struck with case where i was hit by the error Nothing handled the action 'alerthello'. 😔 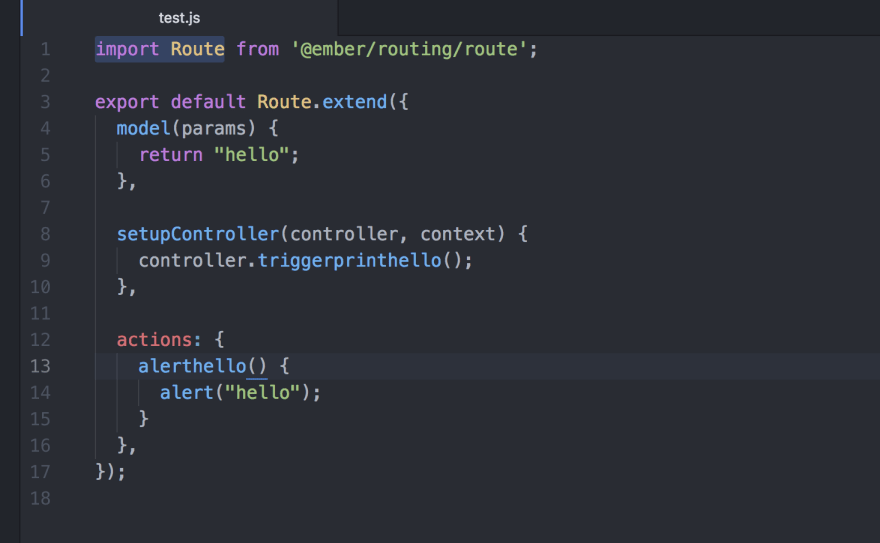 Is this the entire code ?, nope it’s just a sample (you may steal the code if i showed them 😂)

You may think who the hell in the world would write such a script, well i am that guy.

Ok, let’s come to the point.

I tried to execute the above code, instead of showing the alert it throwed the error.

Then i dig into this thing, then i found something interesting (maybe 🤔 to me).

The thing is that the ember maintains a active route list (Based on which the bubbling happens). 🤔

When I transitioned from some Xroute to testroute ember won’t add the testroute in the active Route List until transition is completed.

In my case, setupcontroller will call the function triggerprinthello which in turn will search for the action alerthello in the active route list, since the testroute(still in transitioning state) is not yet listed in the Active route List, so it will bubble till the application route looking for the action (Ember: did you forget to add the action thinking about your girlfriend) and then boom 💥 it throws the error.

So, how did i solved this:

You may ask why did this crap is posted here, i thought this post might be somewhat helpful to others.

Also, please share your thoughts if i am wrong at something, so that i could correct myself 😊.

I'm looking for at react js 2 months internship (remote only)

sarathkumar
Posh terminals!
#terminal #productivity #opensource #discuss
You're running an online conference but get called out for having an all-male speaker lineup 2 days prior. Yo, What do you do?
#discuss #serverless #aws
Music Monday — What are you listening to? (Classic Rock Edition)
#watercooler #music #discuss

Once suspended, sarath will not be able to comment or publish posts until their suspension is removed.

Once unsuspended, sarath will be able to comment and publish posts again.

Once unpublished, all posts by sarath will become hidden and only accessible to themselves.

If sarath is not suspended, they can still re-publish their posts from their dashboard.

Once unpublished, this post will become invisible to the public and only accessible to sarathkumar.

Thanks for keeping DEV Community 👩‍💻👨‍💻 safe. Here is what you can do to flag sarath:

Unflagging sarath will restore default visibility to their posts.