Continuous household power monitoring with a trained model to alert on unexpected power usage for time of day. Let my Google Home and Phone notify me when I’ve used more electricity than expected. 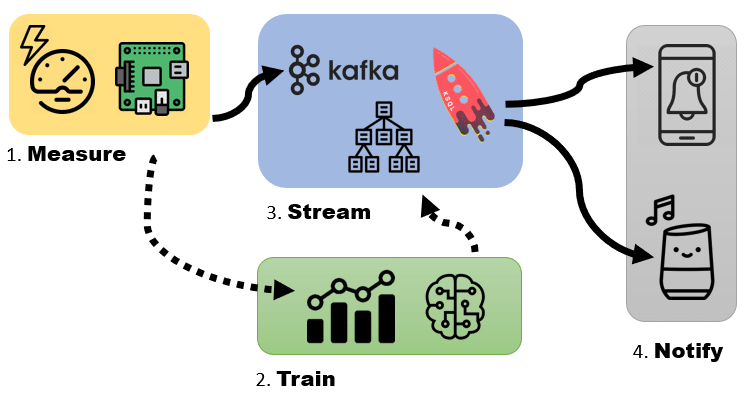 What on earth is this?

Household power consumption fluctuates throughout the day. However, the *pattern *of electricity use follows a typical curve and becomes predictable after sufficient observations. Would it surprise you that very little power is used at night when everyone is asleep? Probably not — but a sudden sudden surge of power used 4 am this is worth checking via an alert on my phone

Ready for the buzz words? Data capture via a Raspberry Pi streamed via Apache Kafka. Real-time processing using KSQL streaming engine enriched with a trained model. Unexpected time of day power usage events get sent via mobile notifications to my phone along with a spoken message via our home speaker.

Inspiration for this project comes from Kai Waehner and his project Deep Learning UDF for KSQL. The notification system was inspired by Robin Moffatt and his blog on Event-Driven Alerting with Slack.

The entire project is easy to run and simply requires docker to demonstrate locally.

With 3 months of data from my experiment of Home Power Monitoring using a Raspberry Pi I had a stack of data to determine what our household power consumption looked like throughout the average day.

Power consumption is measured in “W/hr — Watt hours”. The power consumption range for a 24 hour period in August is shown below. The area shaded in green shows the range from the minimum value for that hour to the highest consumption. In short, values in the green area are normal, and the red area is unexpected.

Consuming 1500 W/hr at 9 am is pretty normal, however 1500 W/hr power draw at 4 am is a cause for alarm as that’s 500% more than expected. In short, an* anomaly score* above 1.0 signifies power usage beyond what has previously been historically measured at that time and day.

*Anomaly score based on hour and power usage. Values above 1.0 are unusual*

KSQL is an open source, streaming SQL engine that enables real-time data processing against Apache Kafka. KSQL supports creating User Defined Scalar Functions (UDFs) via custom jars that are uploaded to the ext/ directory of the KSQL installation. That is, my compiled anomaly score function can be exposed to the KSQL server — and executed against the Kafka stream

TL;DR summary — compile some Java and place in the right directory, start ksql server and verify the function is there …

The scripts below show the steps to create the final “anomaly_power” kafka topic which will be a stream of events where the anomaly function (“anomaly_power”) has found a significantly unusual value. That is, the “anomaly_power” topic should be silent unless an unusual event has occurred

The continuous real-time stream processing is fairly useless unless we have a way of raising an alarm when something odd has happened. I wanted notifications to appear on both my mobile phone and be announced over our Google Home smart speaker. Why get bothered only once when I can get annoyed twice?

Pushbullet is an awesome service bridge that provide a simple API for sending push-notifications to iOS and Android devices.

An iOS push-notification via push-bullet

A bit of python code consumes the ANOMOLY_POWER topic and calls pushbullet. A consumer is established, and an event handler calls the notification service on receipt of a new Kafka events. Each message generates a new push notification.

I run the Hass.io Home Assistant software locally to control home automation tasks. One nice feature is a simple API to send text messages as spoken voice commands directly to out Google Home smart speaker. That is, construct a string — and it gets spoken (quite loudly) via the Google Home.

The first legitimate alarm I received was when I was on holiday. The notification at 9am on a Saturday morning was an notification signifying the household was using substantially less power than was expected. This was indeed true — maybe I need more holidays to train the model correctly!

Game Dev Digest - The Newsletter On Unity Game Dev - May 20