This article was first published on Medium. You can take a look at it here.

Actually Functional programming is more than just being fun.

Functional programming concepts are important even if someone programs in imperative or object oriented languages.

It has many concepts which can be used in the program irrespective of the language a person programs in.
Let’s take it one by one.

When are functions called pure? 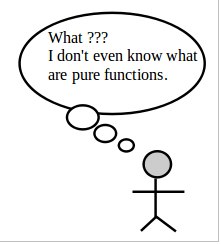 A function is called pure if it always returns the same result for same argument values.
Let’s understand it through an example

Above written 2 functions may look similar but they are not.
Following example explains the difference:

sum_impure is an impure function because giving same input 3 as argument to it, it gives different output in each call.

But this is not the case with sum_pure function.

Given 4, 9 as arguments to the sum_pure, it will always return 13 no matter when and where it is being called in the program.

Do you get the difference between sum_impure and sum_pure function?

sum_pure’s output does not depend on the state of the program. It just acts on the input without requiring any information other than arguments to it from the program in which it is being called.

But why shall I make my functions pure?

Secondly, you can’t compare sum_impure’s result with some fixed value because it’s return value will change depending on the value of global variable x.

Now are you getting why we mock databases?

We can reason about what a pure function is doing because its results are predictable. Given same input, it always give same output.

Result of a pure function does not depend on the state of the program.

Result of sum_impure(3) is unpredictable. So if sum_impure is being called at 2 places in the program with same arguments, it may happen that it gives different results at these 2 places.

There are many more advantages like parallelization, memoization associated with pure functions which we will learn in next article of this series.

If you liked the article, please share it with others.

OceanBase: A Fast and Scalable Database for Your Applications

Once suspended, saurabhgiv will not be able to comment or publish posts until their suspension is removed.

Once unsuspended, saurabhgiv will be able to comment and publish posts again.

Once unpublished, all posts by saurabhgiv will become hidden and only accessible to themselves.

If saurabhgiv is not suspended, they can still re-publish their posts from their dashboard.

Once unpublished, this post will become invisible to the public and only accessible to saurabh.v.

Thanks for keeping DEV Community 👩‍💻👨‍💻 safe. Here is what you can do to flag saurabhgiv:

Unflagging saurabhgiv will restore default visibility to their posts.