It's often recommended in the JAMstack best practices to delegate to serverless cloud functions the dynamic parts of an app. To that end, let me introduce you WarpJS, a new serverless approach. It's a JavaScript engine to develop back ends, to bridge the gap with the front end and to deploy it as serverless functions in no time. Made for JavaScript developers with love!

Without any further ado, let's get started!

(If you don't feel like reading, we've also created a video tutorial for this!)

Starting from scratch, with a freshly created Vue.js project.

Alternatively, you can fork the project right here and skip all the code source copy/pasting steps.

2. Create the back end

Let's create a server directory at the root of your main project and initialize a new Node.js project inside it:

Here we will create a Basic HTTP Proxy in Node.js in order to:

To do so, we first need to install the Axios library we need:

Then I create an index.js, and I retrieve first with Axios the flow. I will reduce the attributes, keeping only the id, the email… and a couple of others. I've also added a Lego random portrait (because.).

But most importantly I export this function:

This will tell WarpJS: "okay, I need this function to be turned serverless and to be hosted as a serverless function". That way we don't have at all to deal with HTTPS, we don't deal with the arguments, the errors, the endpoints, or anything else.

So now let's see how to set it up!

In my server project, I need to create a WarpJS configuration file, warp.config.js as follows:

node\_modules is a safe directory: each framework uses tools like Babel, ESLint, … and here, you are sure that the generated code will not be transpiled or something else.

We now need the WarpJS CLI in the main project to:

In the client project, you can now install the engine with all the dependencies.

You can request a WarpJS account by following this [link]https://scaledynamics.io/warpjs) 😬

About the parent project, I want to change the way the project is served for local run, and built for deployment. To do this, I add scripts in package.json.

So we will go from this :

Let's break it down a bit to understand it clearly:

I'm turning the existing serve command to serve:client, because now I will basically build at once the server and client.

So here I have the warp emulator, helping me to emulate the serverless function:

And here, I have the serve command, that will serve both the client and server on two distinct HTTP ports:

Then I'm adding whatever is needed to build the clients and the server for deployment:

The client doesn't change, it's still my Vue project. The server will build with Warp because it's Warp serverless function.

I'm finally adding the "deploy" command, we'll how it works a bit later

Let's see now how we can call this serverless function from our front-end project.

First, you have to import the WarpJS engine, once for all in the app. We recommend to initialize it in the entry point of your main project:

Now we create a new component — let's call this users.vue — and paste the template that you can find right here.

And actually the very part of WarpJS is

Last thing I need to do is to call that component in my application, so I just replace the "HelloWorld" component from the template project, by my users component, I import the component itself, and I call the JavaScript.

So last thing to log in into WarpJS to be able to build and deploy this!

It's pretty easy as we prepared the command line, we just have to type npm run serve, and then we serve both client and server. It opens a browser tab, and it's working!

We got everything, our users, filtered by the proxy, with the email addresses, the names…

8. Deploy front on CDN and back on Serverless

Let's see out deployed is now online. Actually, this is one of the simplest things to do with WarpJS. You just need to build, first, your project with the build command line we prepared

and then we type in another command:

We prepared it just before in be package.json. Let's have another look to that one:

This means I want WarpJS to deploy the server part from the "server" directory, and the asset directory to a CDN from the "dist" folder, which has just been built.

The server project is obviously deployed with WarpJS, on the cloud, here on Google functions, the front-end is deployed on a Google CDN (more options with AWS and Cloudflare are coming though) 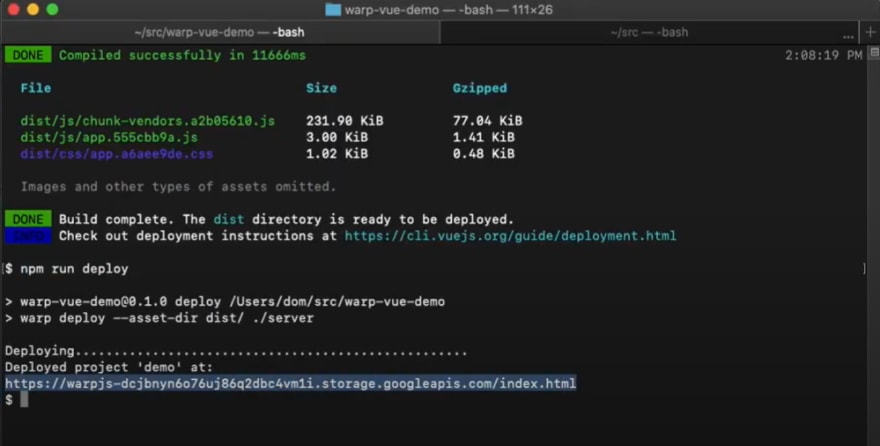 Your project is now live!

So we got a URL, with our client and server: everything is hosted. We did not have to deal with the HTTPS security, the CORS, anything. Everything is just under control there.

You can find the full project code on GitHub under WarpJS/samples.

So we have examples with Angular as well with REACT, and obviously the full code for Vue.js I just did with you!

I hope you enjoyed this tutorial, and if you have any questions, please feel free to ask in the comment section!

Next in this series is a REACT and an Angular tutorial! So stay tuned ;)

Big thanks to Nicolas Pennec who developed the app we took as an example. He is a JavaScript Expert in ScaleDynamics. He co-organizes RennesJS, a French JavaScript Meetup, so if you come by Brittany you're more than welcome to join us!

How to Survive a Coding Bootcamp

caleDynamics provides the most advanced managed cloud computing solution on the market. Run your code in the simplest and most efficient way on the cloud of your choice, on hybrid, on-premise and on multi-cloud environments.

Once suspended, scaledynamics will not be able to comment or publish posts until their suspension is removed.

Once unsuspended, scaledynamics will be able to comment and publish posts again.

Once unpublished, all posts by scaledynamics will become hidden and only accessible to themselves.

If scaledynamics is not suspended, they can still re-publish their posts from their dashboard.

Once unpublished, this post will become invisible to the public and only accessible to Dominique Péré.

Thanks for keeping DEV Community 👩‍💻👨‍💻 safe. Here is what you can do to flag scaledynamics:

Unflagging scaledynamics will restore default visibility to their posts.