I think tail call optimizations are pretty neat, particularly how they work to solve a fundamental issue with how recursive function calls execute. Functional languages like Haskell and those of the Lisp family, as well as logic languages (of which Prolog is probably the most well-known exemplar) emphasize recursive ways of thinking about problems. These languages have much to gain performance-wise by taking advantage of tail call optimizations.

Note: I don't go into excruciating details on how tail calls work in this post. If you feel like you need/want some more background on them, here are a few awesome resources:

With the recent trend over the last few years of emphasizing functional paradigms and idioms in the programming community, you would think that tail call optimizations show up in many compiler/interpreter implementations. And yet, it turns out that many of these popular languages don’t implement tail call optimization. JavaScript had it up till a few years ago, when it removed support for it 1. Python doesn’t support it 2. Neither does Rust.

Before we dig into the story of why that is the case, let’s briefly summarize the idea behind tail call optimizations.

Tail-recursive functions, if run in an environment that doesn’t support TCO, exhibit linear memory growth relative to the function’s input size. This is because each recursive call allocates an additional stack frame to the call stack. The goal of TCO is to eliminate this linear memory usage by running tail-recursive functions in such a way that a new stack frame doesn’t need to be allocated for each call. 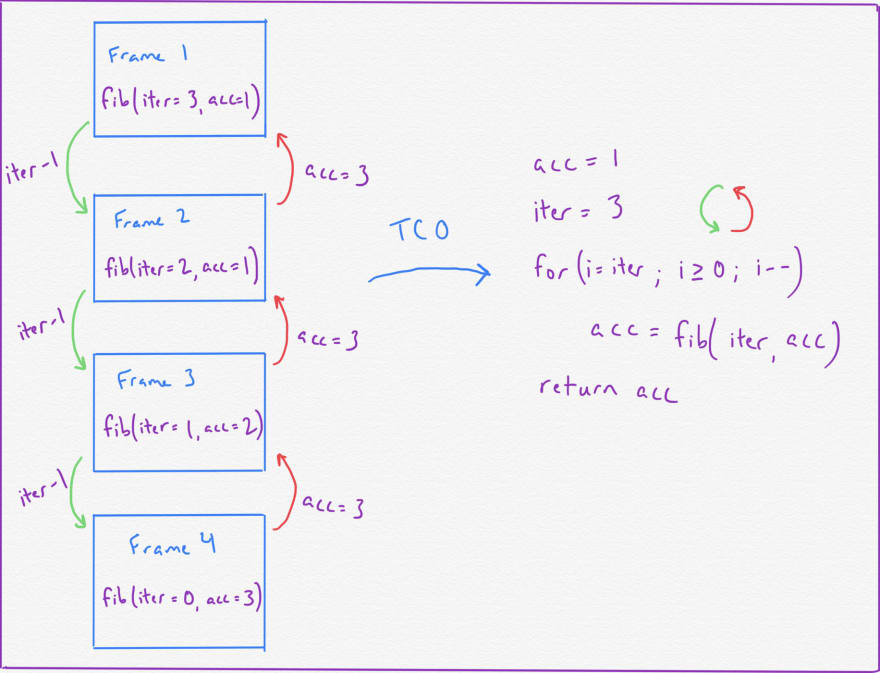 With that, let’s get back to the question of why Rust doesn’t exhibit TCO.

Going Through the Rust Wayback Machine 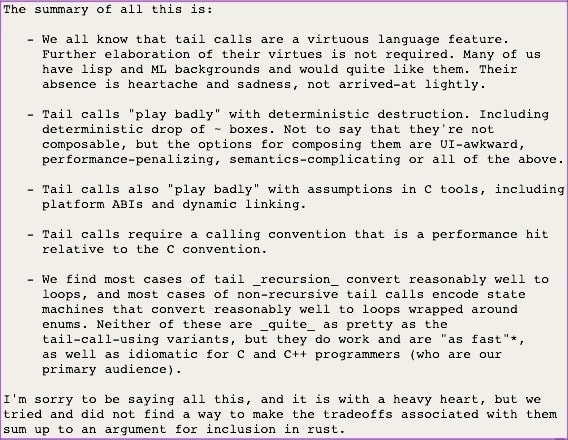 That mailing list thread refers to this GitHub issue, circa 2011, when the initial authors of the project were grappling with how to implement TCO in the then-budding compiler. The heart of the problem seemed to be due to incompatibilities with LLVM at the time; to be fair, a lot of what they’re talking about in the issue goes over my head.

What I find so interesting though is that, despite this initial grim prognosis that TCO wouldn’t be implemented in Rust (from the original authors too, no doubt), people to this day still haven’t stopped trying to inplement TCO in the Rust compiler.

Subsequent Proposals for Adding TCO into the Rust Compiler

In May of 2014, this PR was opened, citing that LLVM was now able to support TCO in response to the earlier mailing list thread. More specifically, this PR sought to enable on-demand TCO by introducing a new keyword become, which would prompt the compiler to perform TCO on the specified tail recursive function execution.

Over the course of the PR’s lifetime, it was pointed out that the Rust compiler could, in certain situations, infer when TCO was appropriate and perform it 3. The proposed become keyword would thus be similar in spirit to the unsafe keyword, but specifically for TCO. Needless to say, this PR didn't end up getting accepted and merged.

A subsequent RFC was opened in February of 2017, very much in the same vein as the previous proposal. Interestingly, the author notes that some of the biggest hurdles to getting tail call optimizations (what are referred to as “proper tail calls”) merged were:

Indeed, the author of the RFC admits that Rust has gotten on perfectly fine thus far without TCO, and that it will certainly continue on just fine without it.

Thus far, explicit user-controlled TCO hasn’t made it into the Rust compiler.

Enabling TCO via a Library

However, many of the issues that bog down TCO RFCs and proposals can be sidestepped to an extent. Several homebrew solutions for adding explicit TCO to Rust exist.

The general idea with these is to implement what is called a “trampoline”. This refers to the abstraction that actually takes a tail-recursive function and transforms it to use an iterative loop instead.

How about we first implement this with a trampoline as a slow cross-platform fallback implementation, and then successively implement faster methods for each architecture/platform?
This way the feature can be ready quite quickly, so people can use it for elegant programming. In a future version of rustc such code will magically become fast.
@ConnyOnny, 4

Bruno Corrêa Zimmermann’s tramp.rs library is probably the most high-profile of these library solutions. Let’s take a peek under the hood and see how it works.

The tramp.rs library exports two macros, rec_call! and rec_ret!, that facilitate the same behavior as what the proposed become keyword would do: it allows the programmer to prompt the Rust runtime to execute the specified tail-recursive function via an iterative loop, thereby decreasing the memory cost of the function to a constant.

The rec_call! macro is what kicks this process off, and is most analogous to what the become keyword would have done if it had been introduced into the Rust compiler back in 2014:

The Call variant of the BorrowRec enum contains the following definition for a Thunk:

The Thunk struct holds on to a reference to the tail-recursive function, which is represented by the FnThunk trait.

Lastly, this is all tied together with the tramp function:

This receives as input a tail-recursive function contained in a BorrowRec instance, and continually calls the function so long as the BorrowRec remains in the Call state. Otherwise, when the recursive function arrives at the Ret state with its final computed value, that final value is returned via the rec_ret! macro.

Are We TCO Yet?

So that’s it right? tramp.rs is the hero we all needed to enable on-demand TCO in our Rust programs, right?

While I really like how the idea of trampolining as a way to incrementally introduce TCO is presented in this implementation, benchmarks that @timthelion has graciously already run indicate that using tramp.rs leads to a slight regression in performance compared to manually converting the tail-recursive function to an iterative loop. 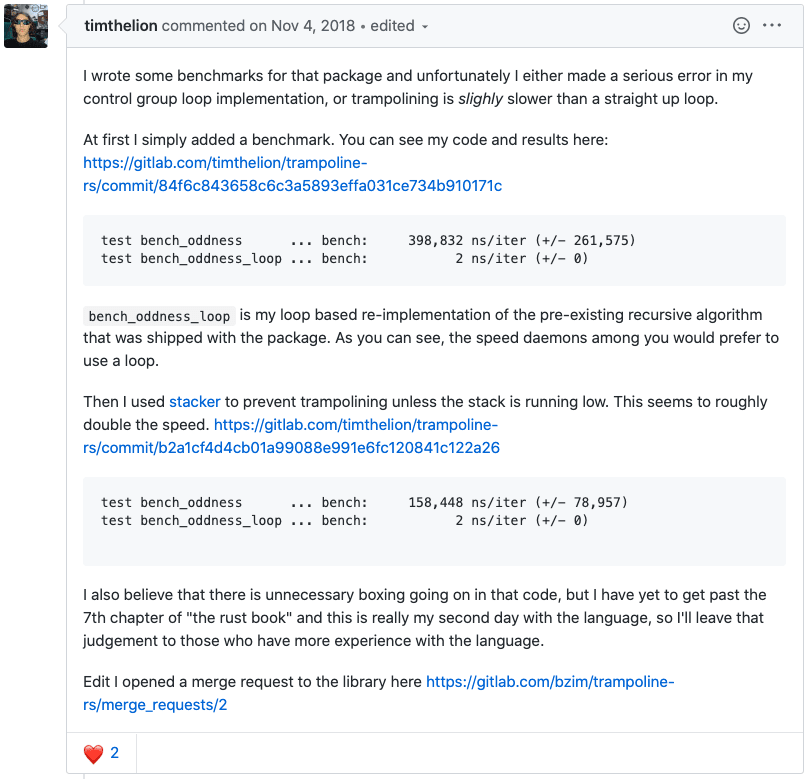 Part of what contributes to the slowdown of tramp.rs’s performance is likely, as @jonhoo points out, the fact that each rec_call! call allocates memory on the heap due to it calling Thunk::new:

So it turns that tramp.rs’s trampolining implementation doesn’t even actually achieve the constant memory usage that TCO promises!

Ah well. Perhaps on-demand TCO will be added to the Rust compiler in the future. Or maybe not; the Rust ecosystem has gotten by just fine without it thus far.

Rust & Cross-compiling from Linux to Mac on GitHub Actions

Once suspended, seanchen1991 will not be able to comment or publish posts until their suspension is removed.

Once unsuspended, seanchen1991 will be able to comment and publish posts again.

Once unpublished, all posts by seanchen1991 will become hidden and only accessible to themselves.

If seanchen1991 is not suspended, they can still re-publish their posts from their dashboard.

Once unpublished, this post will become invisible to the public and only accessible to Sean Chen.

Thanks for keeping DEV Community 👩‍💻👨‍💻 safe. Here is what you can do to flag seanchen1991:

Unflagging seanchen1991 will restore default visibility to their posts.