This is a sample from my This Week In React newsletter. Subscribe for more!

The library is now fully rewritten in TypeScript.

This hook allows React to work properly in concurrent mode and sync with an external state (from Redux) without tearing (the UI can't become inconsistent with store state).

This hook is the "level 2" (make it right) of the state subscription ladder: 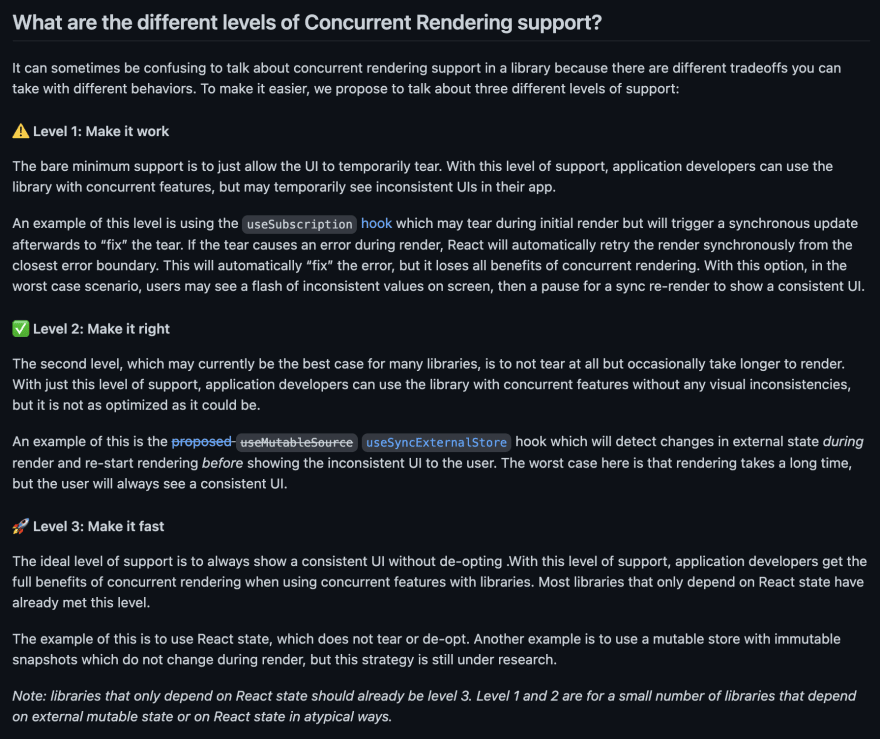 Dan Abramov explains it's an important milestone for React 18:

For the first time we’ve been able to move the “meat” of the react-redux bindings implementation into react itself.
It wasn’t a lot of code, but it relied on a bunch of hacks and complexity that kept growing. Now that “meat” is 5 lines of code, we handle the rest.

To ease incremental adoption in libraries today, an external package use-sync-external-store has been published, allowing to use this hook with a consistent API on React 16, 17 & 18.

Unlike the former useMutableSource API, this new hook supports unstable, inline selectors without re-subscribing, and you won't need to wrap selectors in useCallback to stabilize them:

The community remains very interested to have a native useContextSelector() hook in React core.

A performant useContextSelector() hook would allow Redux to try again passing the store state directly as context value, instead of passing a store object and managing subscriptions internally. React would now hold entirely the Redux state and the React-Redux bindings would move to the ladder's stage 3 (make it fast). This stage would permit React to avoid unnecessary rendering work when a Redux store update happens while a concurrent rendering is in progress.

useContextSelector is still under research and is not a mandatory feature for React 18 to land. Andrew Clark commented that it will more likely be released in a minor 18.x release.

a crude imitator of react

Build a Twitch Chat Clone with React, TailwindCSS and Socket.io

Once suspended, sebastienlorber will not be able to comment or publish posts until their suspension is removed.

Once unsuspended, sebastienlorber will be able to comment and publish posts again.

Once unpublished, all posts by sebastienlorber will become hidden and only accessible to themselves.

If sebastienlorber is not suspended, they can still re-publish their posts from their dashboard.

Once unpublished, this post will become invisible to the public and only accessible to Sebastien Lorber.

Thanks for keeping DEV Community 👩‍💻👨‍💻 safe. Here is what you can do to flag sebastienlorber:

Unflagging sebastienlorber will restore default visibility to their posts.