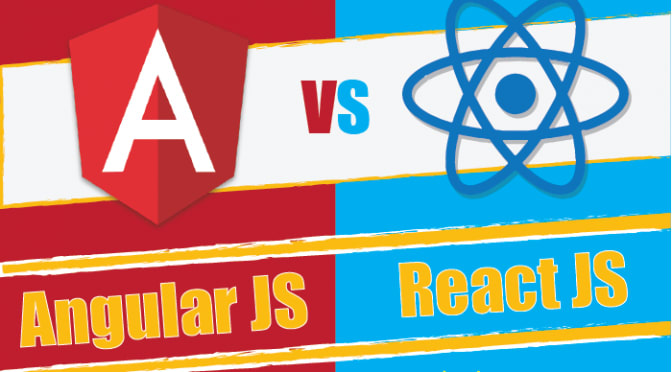 ReactJS is a JavaScript library and has a view, but lacks model & controller components. React introduced the concept of virtual DOM which is regarded as one of the greatest advantages of React in comparison of AngularJS. It relies on the conventions of a team to keep code written in a specific style, but its simplicity can be very powerful and expressive.
AngularJS is a most popular javascript framework; its syntax is very heavy.

Services provided by ReactJS are as follows:

· Components can be easily reused

· Faster performance when it comes to displaying a huge amount of components.

· Easy to debug because of special chrome extensions

The following are the difference between ReactJS & AngularJS:

React has much more advantages over angular. The most important once are its re-usability, relative stability & high-performance oriented work.

Once suspended, sharadtricks will not be able to comment or publish posts until their suspension is removed.

Once unsuspended, sharadtricks will be able to comment and publish posts again.

Once unpublished, all posts by sharadtricks will become hidden and only accessible to themselves.

If sharadtricks is not suspended, they can still re-publish their posts from their dashboard.

Once unpublished, this post will become invisible to the public and only accessible to Sharad.

Thanks for keeping DEV Community 👩‍💻👨‍💻 safe. Here is what you can do to flag sharadtricks:

Unflagging sharadtricks will restore default visibility to their posts.