Performance regressions are something that I find rather hard to track in an automated way. For the past years, I have been working on a tool called fd, which is aiming to be a fast and user-friendly (but not necessarily feature-complete) alternative to find.

As you would expect from a file-searching tool, fd is an I/O-heavy program whose performance is governed by external factors like filesystem speed, caching effects, as well as OS-specific aspects. To get reliable and meaningful timing results, I developed a command-line benchmarking tool called hyperfine which takes care of things like warmup runs (for hot-cache benchmarks) or cache-clearing preparation commands (for cold-cache benchmarks). It also performs an analysis across multiple runs and warns the user about outside interference by detecting statistical outliers¹.

But this is just a small part of the problem. The real challenge is to find a suitable collection of benchmarks that tests different aspects of your program across a wide range of environments. To get a feeling for the vast amount of factors that can influence the runtime of a program like fd, let me tell you about one particular performance regression that I found recently².

I keep a small collection of old fd executables around in order to quickly run specific benchmarks across different versions. I noticed a significant performance regression between fd-7.0.0 and fd-7.1.0 in one of the benchmarks: 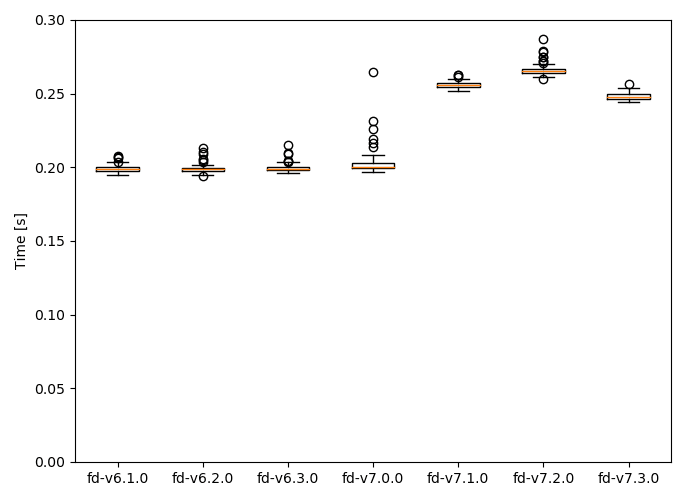 I quickly looked at the commits between 7.0 and 7.1 to see if there were any changes that could have introduced this regression. I couldn't find any obvious candidates.

Next, I decided to perform a small binary search by re-compiling specific commits and running the benchmark. To my surprise, I wasn't able to reproduce the fast times that I had measured with the precompiled binaries of the old versions. Every single commit yielded slow results!

There was only one way this could have happened: the old binaries were faster because they were compiled with an older version of the Rust compiler. The version that came out shortly before the fd-7.1.0 release was Rust 1.28. It made a significant change to how Rust binaries were built: it dropped jemalloc as the default allocator.

To make sure that this was the root cause of the regression, I re-enabled jemalloc via the jemallocator crate. Sure enough, this brought the time back down: 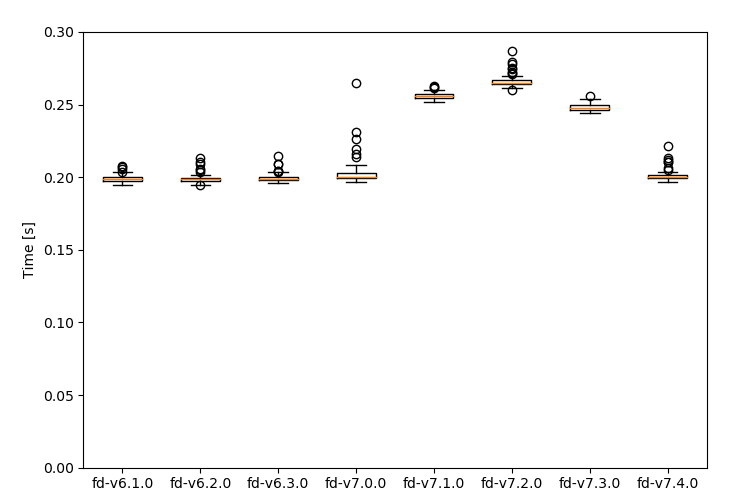 Subsequently, I ran the whole "benchmark suite". I found a consistent speed up of up to 40% by switching from the system-allocator to jemalloc (see results below). The recently released fd-7.4.0 now re-enables jemalloc as the allocator for fd.

Unfortunately, I still don't have a good solution for automatically keeping track of performance regressions - but I would be very interested in your feedback and ideas.

¹ For example, I need to close Dropbox and Spotify before running fd benchmarks as they have a significant influence on the runtime.

² As stated in the beginning, I don't have a good way to automatically track this. So it took me some time to spot this regression :-(

Watching videos on 720p instead of 1080p cuts the energy consumption of your phone in half!

Once suspended, sharkdp will not be able to comment or publish posts until their suspension is removed.

Once unsuspended, sharkdp will be able to comment and publish posts again.

Once unpublished, all posts by sharkdp will become hidden and only accessible to themselves.

If sharkdp is not suspended, they can still re-publish their posts from their dashboard.

Once unpublished, this post will become invisible to the public and only accessible to David Peter.

Thanks for keeping DEV Community safe. Here is what you can do to flag sharkdp:

Unflagging sharkdp will restore default visibility to their posts.