Ransomware is an epidemic that adversely affects the lives of both individuals and large companies, where criminals demand payments to release infected digital assets.

In the wake of the ransomware success, Ransomware-as-a-Service (RaaS) is being offered as a franchise model that allows people without programming skills to become active attackers and take part in the ransomware economy. This is a way of democratizing crime, giving ordinary people and smaller players an easier way into the criminal market, while reducing the risk of exposure for the ones on top of the value chain. For instance, a dissatisfied employee might decide to partner up with a RaaS developer to effectively infect an organization from the inside and then splitting the profit.

Wait a minute, this sounds like SaaS (Software as a Service) with the exception of mal-intent and ‘R’ prefix instead of ‘S’ ?

Yes, these organized cybercrime groups have been known to offer 24/7 technical support, subscriptions, quality assurance, affiliate schemes, and online forums just like legitimate SaaS companies. They know that offering a quality service to their (admittedly) criminally-minded clients will help both sides of the venture to become wealthy at the expense of victimized individuals or organizations that they prey upon.

What led to the inception of RaaS ?

The first ransomware, known as AIDS ( Aids Info Disk or PC Cyborg Trojan), was observed in the wild already in 1989, spreading through the exchange of floppy disks. Following AIDS ransomware, number of ransomware families were quite low for more than two decades, especially the ones with sophisticated destructive capabilities. However, this all changed with the advent of stronger encryption schemes in the ransomware code and especially the availability of cryptocurrency as a payment method which is fairly difficult to track by law enforcement. In the wake of the ransomware success, ransomware-as-a-service (RaaS) has become an entry point for criminals with little programming skills to participate and earn money from ransomware.

Is there an underpinning supply-chain that benefits a RaaS provider?

RaaS can have different delivery formats,

This collaborative strategy is a way of achieving a faster rate of infections with a lower risk of getting caught.

Who are the stakeholders in such a ransomware based supply chain?

The stakeholders involved in the underground economy have different responsibilities and expose themselves to different types of risks. They defined several roles, including

What is the economics of such an attack from offender and victim’s point of view?

Similar to a SaaS pricing and distribution model, a victim is profiled and targeted based on their business domain, market share, clients that they serve and WTPR (willingness to pay ransom). The amount of a single ransomware can be of a fixed price or discriminated based on several factors (basis associated with complexity of vulnerability the malware is exploiting).

Who is REvil and why are they relevant to this conversation?

REvil (also known as Sodin and Sodinokibi) is a ransomware-as-a-service (RAAS) enterprise that first came to prominence in April 2019. Their claim to fame is based on the employed tactics and techniques which include and not limited it

Who is Kaseya and why are they relevant to this conversation?

Kaseya sells unified IT monitoring & management software for MSP (Managed Service Providers) and IT reams (multi and single site). The MSPs in turn sell monitoring and management services to their customers. Let’s visualize the supply chain distribution of Kaseya software 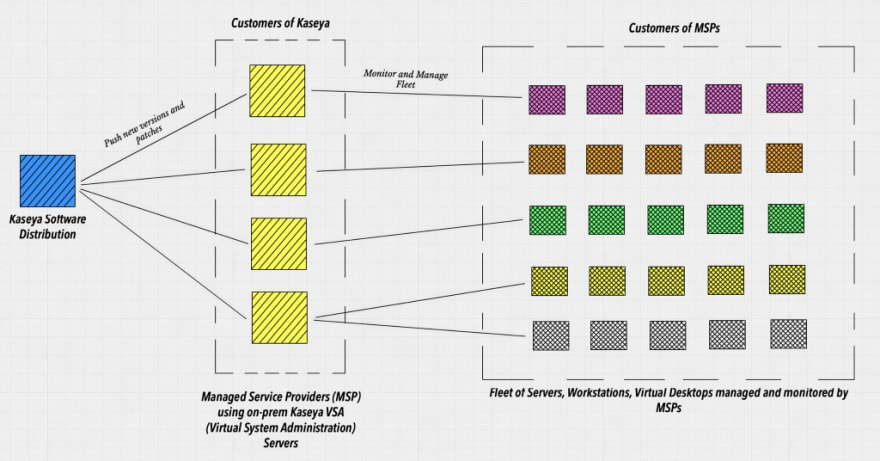 How did REvil victimize Kaseya?

During the month of June/July 2021, REvil discovered the exposed VSA servers (possibly via recon) and further on, discovered the unpatched vulnerabilities. REvil took credit for launching one of the farthest reaching ransomware attacks on record beginning July 2 and demanded $70 million in Bitcoin in exchange for a universal decryption routine.

Why did Kaseya fail to address these inherent security issues?

As per the latest Bloomberg article,

Among the most glaring problems was software underpinned by outdated code, the use of weak encryption and passwords in Kaseya’s products and servers, a failure to adhere to basic cybersecurity practices such as regularly patching software and a focus on sales at the expense of other priorities, the employees said.

One of the former employees said that in early 2019 he sent company leaders a 40-page memo detailing security concerns and was fired about two weeks later, which he believed was related to his repeated efforts to flag the problems.

Another employee said Kaseya rarely patched its software or servers and stored customer passwords in clear text — meaning they were unencrypted  — on third-party platforms, practices the employee described as glaring security flaws.

Some engineers and developers at the company said employees quit over frustration that new features and products were being prioritized over fixing problems. Others were laid off in 2018, when Kaseya began moving jobs to Minsk, Belarus, where it recruited more than 40 people to do software development work that had previously been carried out in the U.S., according to two of the former employees familiar with the matter. Four of the ex-workers said they viewed the outsourcing of work to Belarus as a potential security issue, given the country’s close political allegiance with the Russian government.

Should we (as SaaS and software vendors) be concerned ?

If you are authoring and distributing software as COTS or SaaS (agent, runtime observability, management-monitoring, transactions based, web-based, etc) you should concerned and stay on top of measuring your supply chain’s security posture.

What should we (as SaaS and software vendors) be measuring ?

These detection capabilities should not occur in isolation as context is lost if not correlated.

What should we do and how can ShiftLeft help?

We at ShiftLeft have been studying and provisioning advanced detection policies using code property graph since mid 2019 (that includes OWASP based vulnerabilities, sensitive data leaks, insider attacks, exploitable open source based vulnerabilities, exposed API endpoints). Speak to us and we can help assess and recommend more efficient processes and procedures.

Why is_admin() is totally unsafe for your Wordpress development

How to combine Pentest with Automation to improve your security