You just joined an established project and have been given access to the source code. Sometimes we find that it is easier to understand the structure of the project by looking into the database tables and the relations between them. Recently I found myself in this situation with a project that can be built locally with Docker Compose. This is a note about what I did to glimpse in the project's tables.

In order to allow readers to follow along for a more hands-on experience, we are going to use the Dockerize Rails app created by Georg Ledermann as the "established project." The project already has a docker-compose.yml setup that connects a PostgreSQL database to a Ruby on Rails application.

Simple Rails 6 application to demonstrate using Docker for production deployment. The application is a very simple kind of CMS (content management system) allowing to manage posts. Beside the boring CRUD functionality it has some non-default features.

This project aims to build a lean Docker image for use in production. Therefore it's based on the official Alpine Ruby image, uses multi-stage building and some optimizations that I described in my blog. This results in an image size of ~80MB.

Let's setup the project locally by referring to the Check it out! section of the repository:

At this point, you should have a few services running which you can check with the docker-compose ps command:

If you want to checkout the web application that is running on your host, visit http://localhost:32774. Note that the value 32774 comes from the Ports column of docker-rails_app_1 in the output of the docker-compose ps: container's port 3000 is exposed on the host's port 32774. 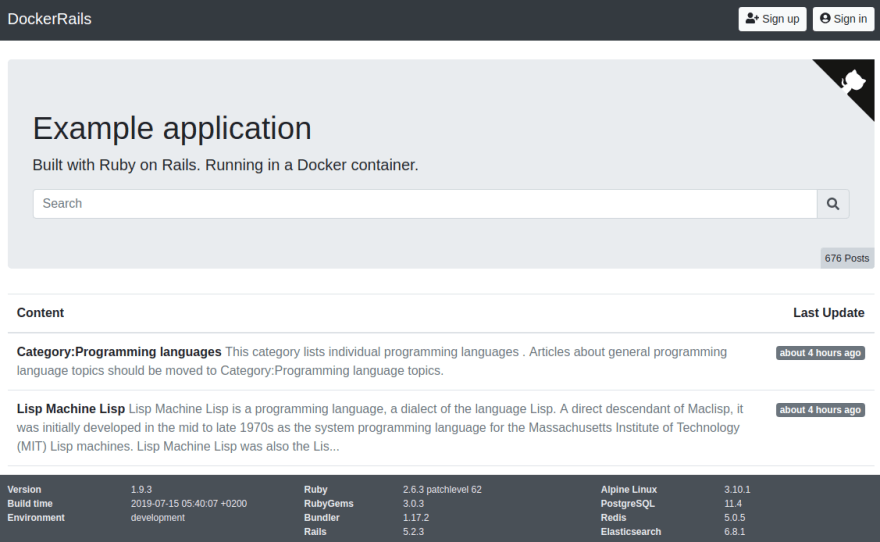 Here we will show how to access to the development database using two different tools:

Before doing so, we need to know the credentials for the database which can be found on the docker-compose.yml. The database that we are interested in is docker-rails_development. Let's export these value as environment variables:

Install pgcli based on the instructions in official documentation. Based on the information below we want to connect to the database (docker-rails_db_1) on port 5432.

However the port is not exposed to the host. Therefore, doing the following will fail

Using the IP address above, we can access the database via

For SchemaSpy, we will try will a different approach: Using the SchemaSpy's Docker container to connect to the existing database and generate the database diagrams for us. For this we need to know the name of the network created by docker-compose for this project:

Now that we know the network name, we can use the --net option in the docker run command to connect the SchemaSpy container to the existing project network. The following will generate the database diagrams in the db_out/ directory.

Open db_out/index.html with a browser to checkout the generated diagrams.

That's all for this post. The tricks mentioned above might seem limited to PostgreSQL but with little modification we believe that it can be applied on other types of databases too. As for cleanup, since it is a Docker Compose project, cleanup is as simple as:

Thank you for reading! Found a typo? See something that could be improved or anything else that should be updated on this blog post? Thanks to this project, you can easily create a pull request on https://github.com/shihanng/dev.to to propose a fix instead of posting a comment.

Setting up Docker with Pipenv

RepliByte - an open-source tool to synchronize PostgreSQL in multiple environments

Getting Started with Redis Stack

Shi Han
I mainly worked with Go as a backend developer but recently is transitioning to TypeScript and Python. I don't tweet much but feel free to connect with me via DEV and Twitter ❤️
Memory Reservation in Amazon Elastic Container Service
#aws #docker #learning #beginners