This post is a note that explains the issue and its cause and solution(s).

I created the web app that fetches the users' information and shows them as a list. It also has the functions to edit or delete them.

The final code is here. 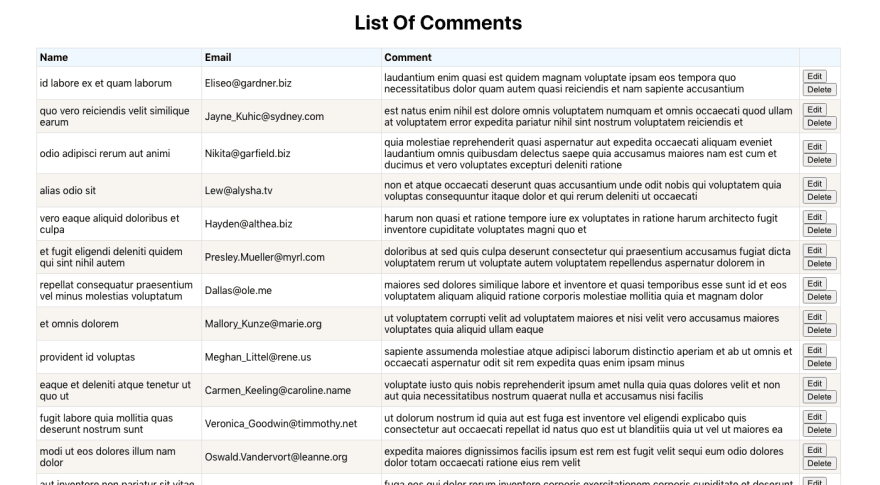 What is the issue?

The issue was that the edit button seemed not working.

The code of the component with the issue is here.
You can also interact with the code here.

The reason why it seemed not working is because the edit button's onClick event ends after the component gets re-rendered.

Added console.log and checked what happens when clicking the edit button.

According to the logs, the following happens under the hood.

The edit button works but the save button, I mean, handleSave function gets executed at the same time.

Since these things happen very quickly, we cannot see it and it looks the edit button is not working.

The following code is the simplified version of the render part of the Comment component.

state editComment is false at first, so there shouldn't be form and the save button yet.

Then why is handleSave function called?
Again, it is because the edit button's onClick event ends after the component gets re-rendered.

After clicking the edit button, form gets created.

Since the edit button and the save button lie in the similar structure, so React regards these two as the DOM elements of the same type. In other word, React cannot differentiate these two buttons.

When comparing two React DOM elements of the same type, React looks at the attributes of both, keeps the same underlying DOM node, and only updates the changed attributes.

So, the edit button is not destroyed. It remains there and just gets updated its attributes and properties.

It is still the edit button with extra attributes such as from="form1" or type="submit" saying "save", so to speak.

Then still the button's onClick persists.

When the button's onClick event ends, the button is associated with form and calls handleSave function.

Apparently, this is a super niche edge case.

Using a table layout or placing the form's items outside form may cause the issue.

Considering accessibility or readability carefully when building the structure could prevent errors.

This is the lesson that I learned this time!

To understand this issue clearly, I popped into a bunch of web dev communities and asked around for this.

I'm really grateful to people in these communities for trying to help me with this. Again, thank you so much🙏

Once suspended, shivchan will not be able to comment or publish posts until their suspension is removed.

Once unsuspended, shivchan will be able to comment and publish posts again.

Once unpublished, all posts by shivchan will become hidden and only accessible to themselves.

If shivchan is not suspended, they can still re-publish their posts from their dashboard.

Once unpublished, this post will become invisible to the public and only accessible to Kaho Shibuya.

Thanks for keeping DEV Community safe. Here is what you can do to flag shivchan:

Unflagging shivchan will restore default visibility to their posts.