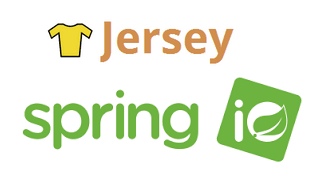 Recently I had an opportunity to use two different REST libraries to write client side code for consuming REST web services. The libraries were Spring RestTemplate (spring-web, 4.3.10.RELEASE) and Jersey Client (jersey-client, 1.18). Although the latter is an older version, it was much easier to use it. My goals were very simple and specifically the following:

Spring provides RestTemplate API to invoke various HTTP methods on a REST Web Service. Although there are methods dedicated to most HTTP method such as getForObject GET, postForObjectPOST, PUT etc., the methods don't provide full control over what is to be sent out. So you have to rely on the generic methods such as exchange or execute.When using these method one has to supply parameter such as HttpEntity even when you don't want to send any and this ambiguously named class is used to setup HTTP headers on the request (some examples on this thread).

Setting basic authentication using either of the libraries wasn't difficult. Spring requires us to setup an interceptor on the RestTemplate instance whereas Jersey requires adding filter class. Both the libraries provide built-in implementations which can be extended if required. Spring provides BasicAuthorizationInterceptor and Jersey provides HTTPBasicAuthFilter.

Logging request and response is an important feature for investigation. Like basic authentication, this feature is to be implemented using an interceptor in Spring and a filter in Jersey. Jersey gives a very handy implementation of such as filter called LoggingFilter which can help in logging all kinds of incoming and outgoing traffic. Spring requires you to implement your own interceptor. But that's not enough, you also need to configure the RestTemplate instance to use BufferingClientRequestFactory which helps in reading the response from input stream twice - once for logging and another for application code. Sample implementation can be seen here. The sample implementation of LoggingFilter in Jersey has this aspect built-in. So Jersey gives us a headstart.

Spring RestTemplate approach towards handling HTTP status codes which are not in the 2xx range isn't user-friendly in my opinion. Spring will throw an exception - HttpClientErrorException or HttpServerErrorException if it doesn't see successful response. This forces developer to implement a try-catch block to handle the error or register an error handler with RestTemplate. Whereas Jersey's approach is to hand over the ClientResponse instance and it is up to the developer to decide how to treat the response i.e. more freedom.

Finally, let's get into writing test cases. The first thing that is crucial here is to mock server response. Spring is the clear winner here. It provides a very handy set of APIs to mock a REST web service response which allows us to focus on testing the business logic. Have a look at MockRestServiceServer.With Jersey, you have to rely on mocking APIs like Mockito to mock Jersey client APIs which is very distracting and boring.

Considering how easy I found using Jersey to write code that consumes a REST web service, I would say Jersey win in comparison.Spring framework is open enough give us libraries which lets us use Jersey along with Spring. So even if you are working on a Spring based application you can safely use Jersey for your JAX-RS needs.

Disclaimer: I am writing this blog to share my experience in a fairly simple use case. So YMMV. Spring lovers may disagree with me. There are other libraries which such as RESTEasy which I haven't explored. You may share your experience/opinion so that I can learn from your experience too.

Once suspended, shriharshmishra will not be able to comment or publish posts until their suspension is removed.

Once unsuspended, shriharshmishra will be able to comment and publish posts again.

Once unpublished, all posts by shriharshmishra will become hidden and only accessible to themselves.

If shriharshmishra is not suspended, they can still re-publish their posts from their dashboard.

Once unpublished, this post will become invisible to the public and only accessible to Shriharsh.

Thanks for keeping DEV Community 👩‍💻👨‍💻 safe. Here is what you can do to flag shriharshmishra:

Unflagging shriharshmishra will restore default visibility to their posts.