As I previously announced, Amazon was planning to deprecate PA-API version 4 on 31 October 2019. But that didn't happen and the deadline has been pushed back.

Amazon keeps tradition of secrecy on this API transition. To this date not a single company representative officially commented in support forums and we have seen zero public announcements, besides those details provided in documentation for new API.

In a private communication, some of the biggest Amazon partners that rely on PA-API have received a heads up that deprecation will be postponed. But they made them sign NDA, justifying this by the push to get everyone off older API as fast as possible.

PA-API has a huge history of abuse by people that scrape Amazon for data. And last year changes have been mostly aimed to tame all the abusive behavior. This migration to new API is not an exception -- biggest features have been improved security and even further limits to grab big chunks of data at once. 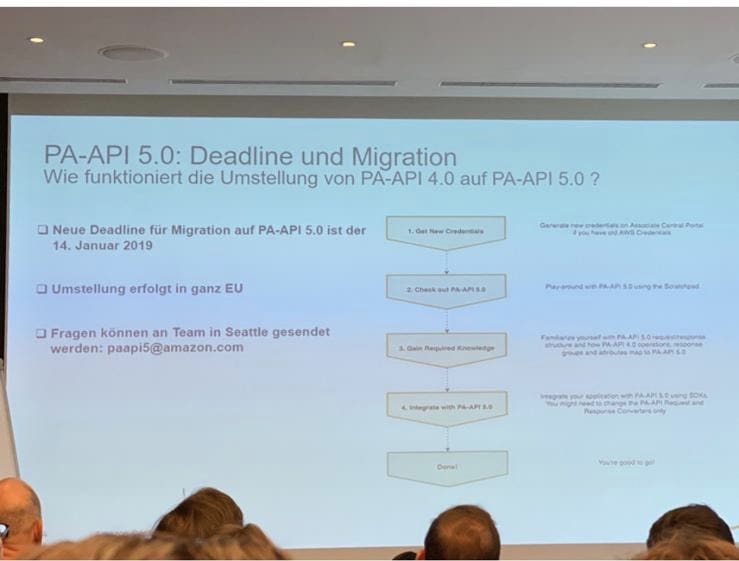 We've found leaked photo from Amazon Associate event in Munich (hence the German language) that suggest that deprecation has been pushed back to 14 January. There seems to be a typo in the year, but our private sources have confirmed this date.

This push back, makes a lot of sense -- it would not be reasonable to do such huge change during biggest sales season. So let's breathe calmly here, we have some time to migrate our websites and apps.

Thanks to Amazon for that!

Build a QRCode Inventory Management System with Autocode and Airtable

Once suspended, skatkov will not be able to comment or publish posts until their suspension is removed.

Once unsuspended, skatkov will be able to comment and publish posts again.

Once unpublished, all posts by skatkov will become hidden and only accessible to themselves.

If skatkov is not suspended, they can still re-publish their posts from their dashboard.

Once unpublished, this post will become invisible to the public and only accessible to Stanislav(Stas) Katkov.

Thanks for keeping DEV Community 👩‍💻👨‍💻 safe. Here is what you can do to flag skatkov:

Unflagging skatkov will restore default visibility to their posts.