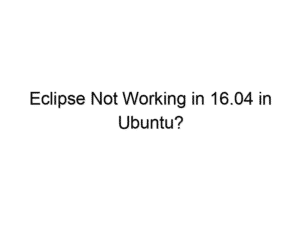 Eclipse was working as good as anything on 14.04. I did a clean install of 16.04 and installed Eclipse. But it runs a Java program only once after which it just hangs during subsequent attempts before I remove and reinstall it. I have tried many things, since in the beginning I needed CDT as well. Right now, I just want to remove everything related to eclipse and do a fresh install (remove all the configs and dependencies). Please note that I used Eclipse installer to install Eclipse and the eclipse icon image is also not appearing (the default ubuntu ? is appearing).

I had something the same with 16.04 and Eclipse Mars. I thought it had frozen but in fact it was running very, very slowly. The problem is the version of GTK+ 3, shipped with 16.04. Fortunately the solution is very easy. Open a terminal and then type export SWT_GTK3=0, then start Eclipse from the terminal. If that works, then a more persistent fix is to put the 2 lines below, as they appear in your eclipse.ini:

The post Eclipse Not Working in 16.04 in Ubuntu? appeared first on Stack All Flow.

How to setup Clouseau for CouchDB search on Unix-like systems

Once suspended, stackallflow will not be able to comment or publish posts until their suspension is removed.

Once unsuspended, stackallflow will be able to comment and publish posts again.

Once unpublished, all posts by stackallflow will become hidden and only accessible to themselves.

If stackallflow is not suspended, they can still re-publish their posts from their dashboard.

Once unpublished, this post will become invisible to the public and only accessible to Stack All Flow.

Thanks for keeping DEV Community 👩‍💻👨‍💻 safe. Here is what you can do to flag stackallflow:

Unflagging stackallflow will restore default visibility to their posts.