If you have followed all my previous blog posts and you had a peek at the code of all the contracts I have created you should already have seen that I always write tests for every smart contract I create.

Have you missed those projects? Well, don’t worry, here’s a list to refresh your memory:

In each of those blog posts you have a GitHub repository where you can see the contract and test code, so don’t wait and give it a read before continuing!

Why should you bother to write tests?

I know, you have written your Solidity smart contract, you have already started the React dev server and you just want to interact with your smart contract deploying it to the main net yoloing everything.

I know that feeling, I know that excitement you get. And you could ask me “Tests are BORING!, why should I bother to write them? Let’s deploy things and see what happen”

Nope, tests are not boring and they are not difficult to write if you know what you need to test and what your contract should and shouldn’t do!

Your smart contract when deployed is immutable, remember that always. You need to be sure that things work as you expect when you deploy them. You can’t predict how others (users or contracts) will interact with it.

It’s like reviewing something from a different point of view.

With tests you can:

🛠 Tools you should use when developing

Many common errors can be easily covered using specific tools that you should always have:

If you want to know more about those tools and how to use them in your Solidity Hardhat project follow my previous post “How to deploy your first smart contract on Ethereum with Solidity and Hardhat”.

Another great suggestion is to not reinvent the wheel. If your contract is about creating a Token (ERC20) or an NFT (ER721) just use an OpenZeppelin contract. They provide secure and optimized implementations of those standards and you can be sure that they are more than battle-tested!

What should you cover in tests?

Before starting writing test coverage I try to think about which tests I need to develop. This is my personal test checklist so it can differ between developers and developers but I think that it can be taken as a good start.

When you write tests you need to cover two main aspects:

This part is both easy and hard at the same time. It’s easy because these errors that your smart contract code needs to cover are already known. The hard part is to know all of them and remember where in your code they could happen.

I have collected some really good content about ethereum and smart contract security and best practice. I strongly suggest you to

Cover the implementation of your own functions

When you write a test for the implementation of your own functions you need to start answering these questions:

I’ll list some useful concepts and functions that I created while I was writing tests for different smart contracts.

How to simulate blockchain mining in your test

When you create unit testing you are using Hardhat local blockchain and not a “real” one where people mint blocks every X seconds. Locally you are the only one interacting with the blockchain and it means that you are the only one creating transactions and minting blocks. It could happen that you need to simulate “time passing” because you need to make some checks on the block.timestamp . The timestamp of the block is updated only if a transaction happens.

To solve this issue on our test I have implemented a little utility:

When you callincreaseWorldTimeInSeconds(10, true) it will increase the EVM internal timestamp 10 seconds ahead of the current time. After that, if you specify it, it will also mine a block to create a transaction.

The next time that your contract will be called the block.timestamp should be updated.

In the latest contract, I needed to test an interaction from ContractA that was calling ContractB. In order to do that I needed to impersonate ContractA 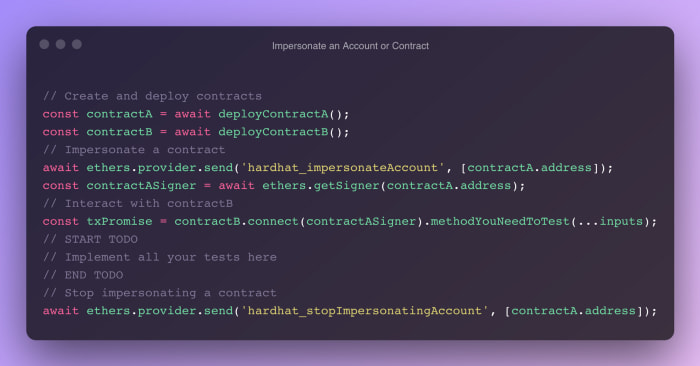 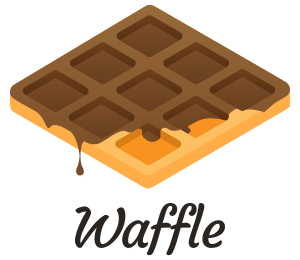 Waffle is a library for writing and testing smart contracts that work with ethers-js like a charm.

Waffle is packed with tools that help with that. Tests in waffle are written using Mocha alongside with Chai. You can use a different test environment, but Waffle matchers only work with _chai_.

To test our contract we will use Chai matchers that will verify that the conditions we are expecting have been met.

After you have written all your test you just need to type yarn test and all your tests will be automatically run against your contract.

Matchers are utilities that make your test easy to write and read. When you write tests usually you can think about them like this

So you are expecting that something matches something else that has happened.

I’ll list all the available matchers, go to the documentation to know how to use them:

Waffle offers much more than only matchers and you could build tests even without using hardhat as a local chain.

I have created a basic smart contract in order to be able to write test coverage for it. The smart contract is called WorldPurpose and the scope for this contract is to allow people to set a World Purpose paying investment to be the one to decide which is the purpose for the whole of humanity. Everyone can override the world's purpose, you just need to invest more money. The previous owners of the purposes can withdraw their funds only when their purposes are overridden.

The most important method in this smart contract are:

Let’s see the entire code of the contract, we are going to discuss how to create a test later on

Let’s assume that you already have a working hardhat project, fully set up with all the libraries installed. If you don’t already have one just clone my solidity-template project.

So first of let’s set up the test file. Usually, I create a test file for each contract. If the contract is big, it has a lot of functions and so a lot of tests maybe it could be a good thing to split each function’s test into different files, but this is just up to you and how you usually manage your project’s structure.

Let’s create a worldpurpose.js file inside our /test folder at the root of our project. If you want to use TypeScript (as I usually do, head over to the template project to see how to create tests with TypeChain and Typescript)

Inside of it, we are going to write this code that I’ll explain

describe is a function that describes what the test is about, what we are going to be testing in this file. It’s useful to structure and read the code and organize the output of our shell when we will run the test.

beforeEach is a function that is executed before every single test. In this case for each test that we add to our test coverage file, a new worldPurpose contract will be deployed. We want to do that because in this case we always want to start a test from a clean checkpoint (everything is reset).

Now, for every function, we are going to set up a new describe function. And inside of them, we will create a test to cover a specific scenario thanks to the function it that will run the test itself.

Ok now that we know how to structure a test let’s review them.

Create tests for the setPurpose function

If we review the solidity code of the function we see that:

If everything passes these checks the function will

For each of these requirements, state changes, event emitted, and returned value we need to create a test. Keep in mind that this is a “simple contract” without contract-to-contract interactions or complex logic.

These are the test we need to implement:

Let’s review some of those. This is the code that covers the first scenario in the previous list:

In this case, we want to test that if the current owner of the purpose tries to override his/her own purpose the transaction will be reverted.

worldPurpose.connect(addr1) allow you to connect to the contract with the wallet’s address of the account addr1

addr1 invoke the setPurpose function of the worldPurpose contract passing I’m the new world purpose! as _purpose input parameter. The value parameter is how much ether will be sent with the transaction. In this case 0.10 ETH

The second part of the test tries to repeat the same operation but we already know that it will fail because the same address cannot override the purpose.

We are going to use the Waffle matcher to check that the transaction has been reverted with a specific error message.

Now it’s your turn to write all the other reverting tests that need to be covered.

Let’s see the code of a “success” scenario (the fifth one on the previous list) where we want to cover the case where the user successfully overrides a purpose.

We have already explained the first part where the addr1 call the setPurpose function.

Now we want to be sure that the purpose has been written into the contract’s state and that the user’s investment has been tracked correctly into the balances variable.

We call the getCurrentPurpose getter function to get the current purpose of the contract and for each member of the struct Purpose we check that the value is equal (.to.be) to the one we expect

After that, we check that the balance of addr1 (worldPurpose.connect(addr1).getBalance()) is equal to the amount of ether we have sent with the transaction.

We could also check that the event PurposeChange has been emitted by the function (in the code we are doing it in another test). To do that we can write

Create tests for the withdraw function

We calculate the withdrawable amount by the msg.sender. If the sender is also the owner of the current world’s purpose we subtract the purpose.investment from the balances[msg.sender].

With that in mind we need to do some checks:

If everything passes these checks the function will

These are the test we are going to implement

Let’s review the code of the success scenario (the third one in the previous list) and you will be in charge to implement the other tests.

We have already seen the setPurpose function so the first part should be pretty straightforward.

addr1 call the withdraw() function. The contract checks how much he can withdraw and send the amount back to his/her wallet.

In this test scenario, we check that after the transaction has been minted:

Now it’s your turn to implement the remaining tests!

Run all tests together

When you have finished writing down all your tests just run this command to run them npx hardhat test. You should see a result similar to this: 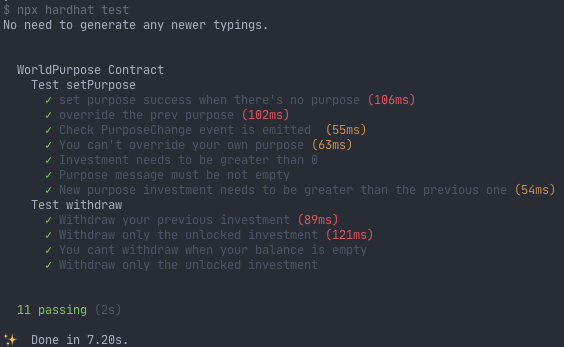 Well done! You have just created your first test file for your solidity project!

Creating a blockchain in 60 lines of Javascript