In simple terms, when an object makes contact with another object, a collision occurs. OpenGL uses various collision detection techniques to detect collisions that happen in your scene maintaining frame rate. The most primitive one is to approximate each object or a part of the object with a simple shapes such as Circles, Rectangles and Points.

To detect a collision between a circle and another circle, the circle-circle collision algorithm is used.

Imagine two circles with with radius of r1 and r2 respectively.

If we get the distance between the two center points of the circle as d, the two circles touch each other when d = r1 + r2. And they overlap when d < r1 + r2. 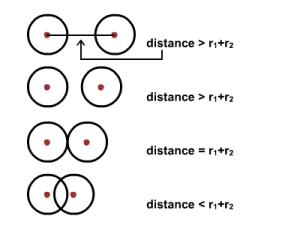 So the circle-circle collision algorithm can be defined as follow.

AABB stands for "Axis-Aligned Bounding Box". That means a rectangular shape aligned to the base axes of the scene. If we are using a 2D scene, the base axis being X and Y.

Down below is an example of a circular object, surrounded by an AABB.

When detecting collisions, We have to consider the both X and Y axis. Consider the following two AABBs.

We can calculate the X range and Y range of the boxes separately as shown in the image above.

When the ranges collapse on each other on either axis, a collision occurs.

In the image above, you can see the X ranges are overlapping. Therefore a collision will occur. Same happens with the Y axis as well.

So far we discussed basic stuff about collisions, Circle-Circle collisions and AABB collisions. That is it for this blog. If you have any questions or feedback, feel free to comment below! Happy Coding!

AI can be fun

Hundreds of micro-frontend applications in the company, How to smoothly upgrade mf from umd

5 steps to succeeding in a new job role

Once suspended, suvink will not be able to comment or publish posts until their suspension is removed.

Once unsuspended, suvink will be able to comment and publish posts again.

Once unpublished, all posts by suvink will become hidden and only accessible to themselves.

If suvink is not suspended, they can still re-publish their posts from their dashboard.

Once unpublished, this post will become invisible to the public and only accessible to Suvin Nimnaka.

Thanks for keeping DEV Community 👩‍💻👨‍💻 safe. Here is what you can do to flag suvink:

Unflagging suvink will restore default visibility to their posts.