The Fallacy of Composition happens when you assume something that is true for one person, is also true for the entire population.

A trivial example looks like this: If someone stands up out of their seat at a football game, they can see better. The Fallacy would conclude that if everyone stood up, they would all be able to see better. 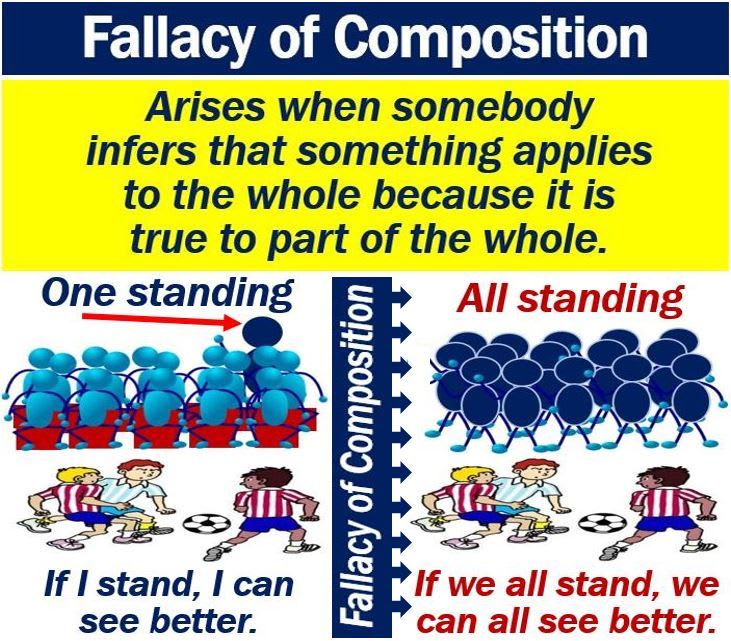 This is taught in every introductory macroeconomics class as the general form of the paradox of thrift (when there is a recession, you should save more to conserve your finances, but if everyone saves more, it deepens the recession). But not everyone learns economics, and not every economics student understands it deeply enough to realize: this is more common sense than it is economics.

Aside: Yes, common sense should be taught in schools, dont @ me!

Developers might be more familiar with the famous Bjarne Stroustrup on managing the growth of C++:

"Individually, many (most?) proposals make sense. Together they are insanity to the point of endangering the future of C++."

If you are a fan of Guy Steele's talk on "Growing a Language" (my notes here), this may sound familiar. Java has a number type, but there are reasonable requests to add other important number types: complex numbers, rational numbers, intervals, vectors, matrices, and so on. He concludes:

The Fallacy of Composition isn't just limited to language design:

By the way, a lot of TED Talk style speaking works this way - tell a personal anecdote, make that analogy to the problem you're trying to solve, introduce the first bit of halfway credible research that supports the story, applause. Ted Talks churn out Fallacies of Composition at industrial scale. If they were all true we would have achieved Nirvana by now.

"Mathematics requires a small dose, not of genius, but of an imaginative freedom which, in a larger dose, would be insanity." - Angus Rogers, via Grant Sanderson of ThreeBlue1Brown

The other day I made an offhand comment to my friend Joe about how the recent trend of Indie Maker group challenges (like his) can be counterproductive. He didn't get it right away, so I had to write this post. I think, if you took a better look at the things you believe and advise people to do, you'll find many, many more examples of the Fallacy of Composition.

RMTSHARE Command: Shares a Folder or a Printer