StyleGANs have sort of become a little hobby for me as of late. Specifically I find myself drawn into the idea of re-purposing existing work into a packaged solution for people to enjoy. So when I found an implementation of StyleGAN trained on images of Pokemon, I got excited at the possibilities of generating entirely random cards.

This post is going to cover all the bits of pieces required to generate your very own Pokemon cards using a mixture of StyleGANs and RNNs. 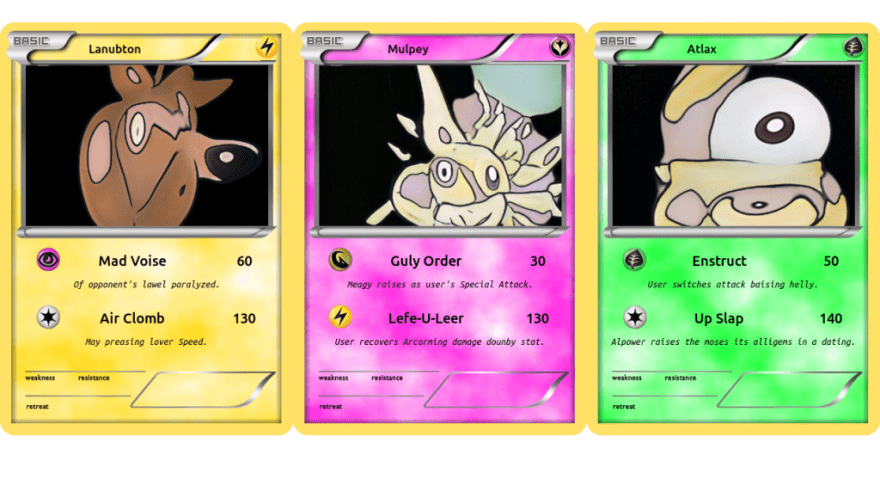 There are five parts to creating these cards:

In this post we'll go over how to achieve each of these steps and create some of your own cards.

In order to get started you will need a couple dependencies on your local computer. One of these is the repository that contains all the code we'll use. You can pull this down using the following command, or simply download a copy from t04glovern/stylegan-pokemon.

I've encapsulated all the dependencies you'll need for this project within an Anaconda environment.

Downloading the data (in this case, images of pokemon) is a crucial step if you are looking to build a model from scratch using some image data. In this tutorial I'll be making use of this data and an existing pre-trained model by ahsenk to demonstrate how you can build on top of his work using data. Run the following commands from within the repository you just cloned to download all the files from S3

There is also a bonus model provided by MichaelFriese10 that you can preemptively download also if you'd like to generate some Pokemon with a more pixel vibe.

There are three avenues you can go down here.

Training a model requires some data to be prepared. to do this simple run the following from within the stylegan directory

The process will resize all the images within the pokemon-a dataset and prepare them for training.

Here's where you have to make your first decision, do you want to train from scratch, or just build on-top of the existing network?

To train from scratch you will need to edit

The process is going to take a while if you do decide to train from scratch. Which ever method you used will output entries in the results directory of the project. Within each of these resulting folders will be a network-final.pkl file that is the model that can be invoked against in the coming steps.

As with training there are three possible ways you can approach the invocation of the model. If you trained your own model, you will need to point the --model_file parameter in the following command to the location of the model you'd like to build a Pokemon with

By default the output image will be placed into ../img/pokemon.png in the root of the repository however this can be overridden using the --output_file param. The example below will invoke the network using the originally downloaded pre-trained model and puts it into the stylegan folder under the name test.png

The final invocation you can perform is against MichaelFriese10's pre-trained model that he based off Pokemon Pixel art instead.

Below is an example of the three outputs

Excellent we know we're able to generate Pokemon images so we can move onto text generation for the Name, Move and Descriptions.

For text generation I made use of a Multi-layer Recurrent Neural Networks (LSTM, RNN) for character-level language models in Python using Tensorflow. This implementation is heavily based on the work done in karpathy/char-rnn. To get started move into the rnn folder.

I've already compiled a dataset for you in three places

Running training over the tree different inputs is the next step. This can be accomplished by running the following three commands. They will output a model for each to a subsequent folder under save.

Feel free to play around with the values in seq_length, though note that the ones above I found to work the best.

To generate image from the model, run the following commands. Note that the output should place a text file in the samples directory of the project

The final piece of the puzzle is the actual card creation. This process is handled by a super complex ImageMagick cropping script along with some wonderful card templates by user levelinfinitum. From the root directory of the project one one of the two methods to create a card.

Below are some example cards I generated with the randomised shuffle 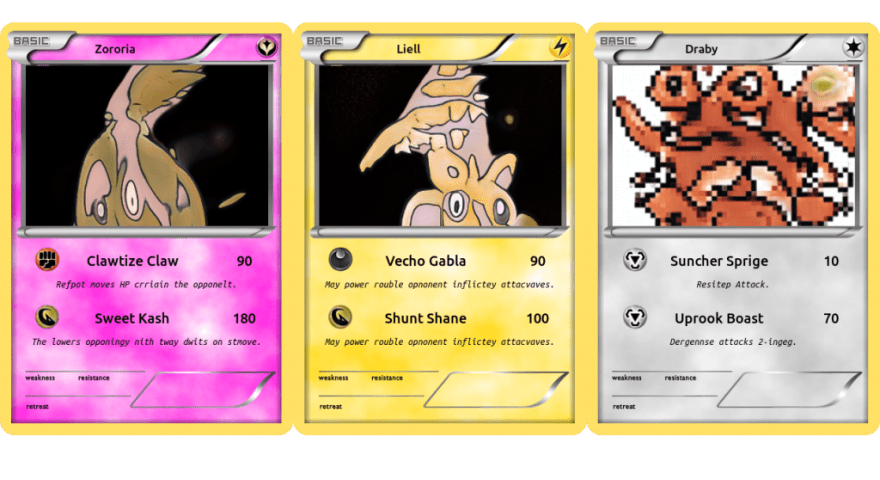 Once suspended, t04glovern will not be able to comment or publish posts until their suspension is removed.

Once unsuspended, t04glovern will be able to comment and publish posts again.

Once unpublished, all posts by t04glovern will become hidden and only accessible to themselves.

If t04glovern is not suspended, they can still re-publish their posts from their dashboard.