In this article, I will show how to set up C++ Compiler with Visual Studio Code. I'm writing this tutorial because I didn't find tutorials with full information in a single place. So here are all the things I have collected from the Internet. I will cover the following things.

I will be using Linux Operating System If you are on Windows try this tutorial. For macOS, for the most part, It will be the same excluding the installing compiler part. You can check it here.

I will be using GNU Compiler Collection so to install gcc, g++, gdb, and make. You can run the following command in the terminal if you using Ubuntu.

on Fedora, you can run

on Arch-based Linux, you can run

Instaling the VSCode is fairly simple, check out this website and check for instructions to install VSCode on your computer.

Once VSCode is installed, open it. You should see the following screen. It may differ because I have changed my theme and have several other extensions. 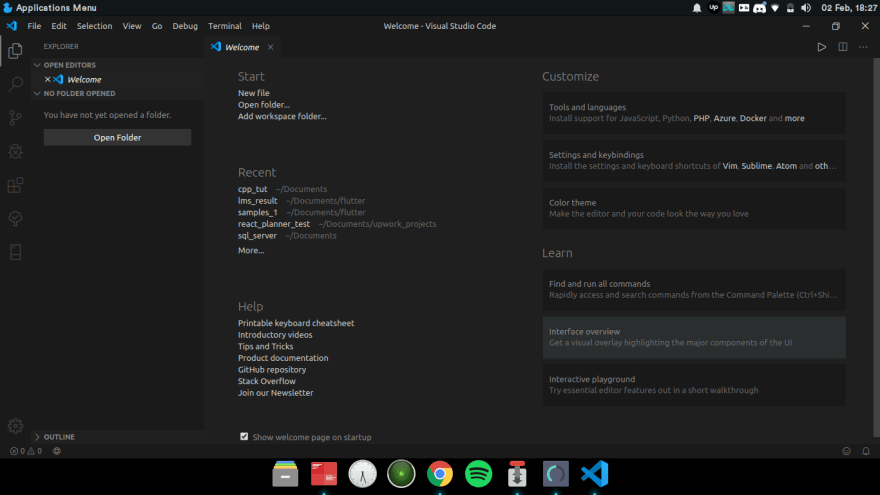 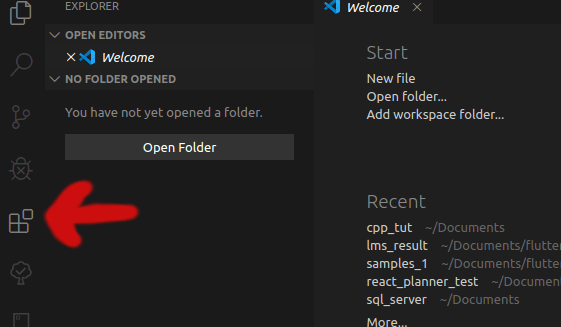 Search for C++ in the search bar and install C/C++ Extension By Microsoft. 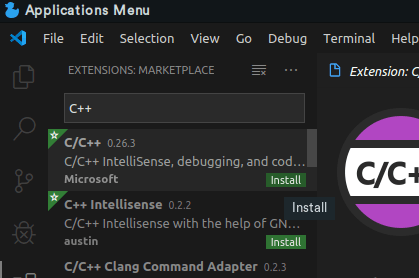 Now let's move to set up our project.

Having a manageable directory structure is important. It can help you quickly understand where you should look for a file. I opted for the following structure because it is simple.

Now that we have a directory structure let's write the Makefile. Open VSCode in your project directory. Before that, Let's see what is a Makefile.

Makefile is read by the make utility which executes the tasks defined in Makefile when the files are modified. We will be using it to build our C++ code. You can learn more about Makefile and make here.

For our purposes, following Makefile should work well. so create a Makefile in the root of your project directory. It should spell exactly the same with a capital M.

If you want to add additional libraries, you can add it after the LIBRARIES variable. You can also change the name of the executable by changing the EXECUTABLE variable. You can tinker with CXX_FLAGS to change the compiler's behavior (i.e. C++ version) but be sure you don't remove -ggdb flag or you won't be able to debug the program correctly.

After creating the file, our directory structure should look like this:

Now that we have our base ready let's add some C++ files. I will create a HelloWorld class that has a say() function that will print out (you guessed it) "Hello, World". Let's create files in our project. I'm gonna use the command line, you can use VSCode or your file manager.

Paste the following code in the respective files.

Now, we have all our project all set up, we have added some test files. let's test everything out. Open a terminal in the project directory and run make.

Now, in the output, we will say the exact command that we would have run if we weren't using make. make has got our back. We don't have to write the whole command each time.

Full explanation of this can be found here.

It is still a pain to open a terminal and type make to build our code. We can do better than that. For this, we will be using VSCode's task runner. With this, we can map VSCode's build keyboard shortcut to task by making it of type build. The easiest way to set up tasks is to press ctrl+shift+b. It runs the build task, but as we don't have any yet it will ask us to set up a build task. After pressing the button you should see the following. 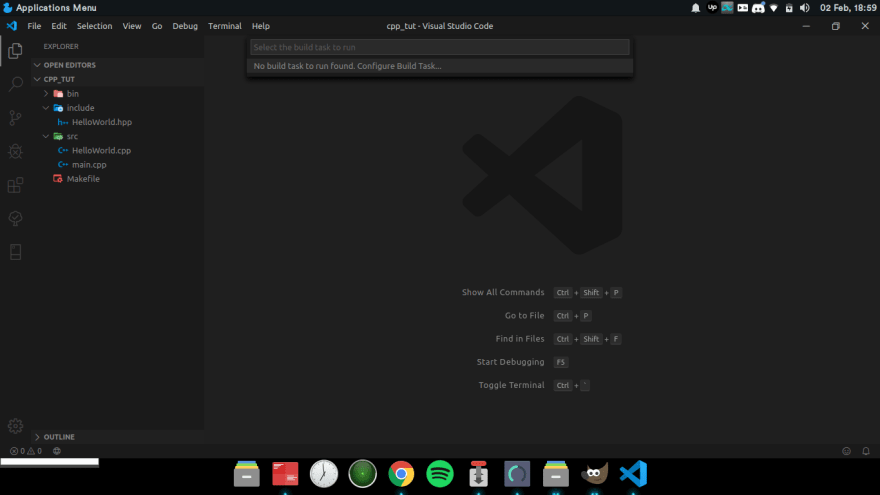 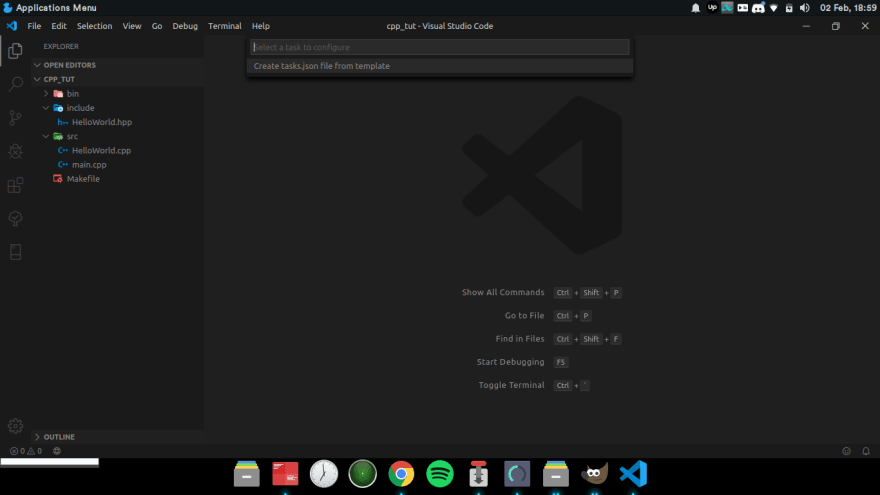 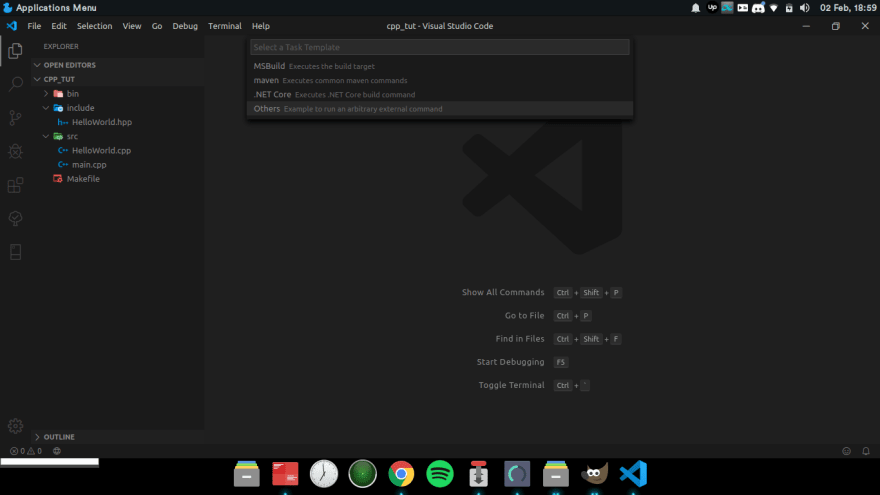 Now, select 'Others'. Now you should see a file created, containing the following content.

tasks.json contains all the tasks that VSCode can run for us. In this case, I have created a task that runs a shell command echo Hello by default. Let's change it to make also change the label of the task to better explain the task.

I also added a property called group where I define what kind of task it is (i.e. build) and if it's default or not. Setting this is important for the build shortcut to run this task. Now try to build the code with ctrl+shift+b.

Problem matchers scan the task output text for known warning or error strings and report these inline in the editor and in the Problems panel. It supports GCC. So in the tasks.json file add the following in the under the "group" property.

Now after running the build task, if any errors or warnings occur you will see them in the problems panel.

Setting up gdb as debugger

We have successfully built our code. Now we are going to configure debugger. To add configuration press F5, A menu will pop up asking you to choose which debugging solution you want to use. Select 'C/C++' and it will generate launch.json in your project directory containing the following config.

There is one problem though, you always have to run build before pressing F5 for debugging. But, we can do better add the following in the launch.json after "setupCommands" property.

This should run the task we defined before starting the debugger. Press F5 and voilà, Code builds and debugger starts.

I'm hoping this tutorial helped you. If you find any mistake or misinformation please let me know.