As the series goes on, the weirder the names get?

We ain't literally constructing a bridge it's more of a metaphor.

The bridge pattern states that you have to build an ASCII bridge between your modules, like this:

In all seriousness, the bridge pattern advocates for the separation of abstraction and implementation.

But what do you mean by abstraction and implementation?

Well, to make things simpler let's go over an example.

Imagine your amazon in its early days.

Back when they only sold hardcover books. 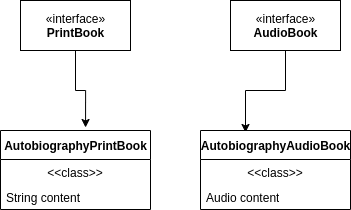 This most definitely works.

But it looks a bit iffy.

If we wanted to create a new book called ActionBook and want to publish it both as a printed book and as an audiobook.

We would be forced to create two new classes:

But what if we also want to publish a digital version of the book?

Once again, we will be forced to create a new ActionDigitalBook class.

In a nutshell for every new book, we have to create up to 3 additional classes for each version.

Also, if you want to do any changes to the book, you will have to do them in multiple places, hence breaking the DRY (Don't Repeat Yourself) principle.

Over time, this gets messy very fast.

But no worries, this is where the bridge pattern shines.

If we examine the classes closely, what's the difference between the audio book and the print book?

Our first step would be to decouple the content from the book classes.

Let's recap what we did over here:

This is the basic premise of the bridge pattern.

It advocates for composition over inheritance.

It's not all sunshine and rainbows, let's go over the benefits and downsides of the bridge pattern.

The bridge pattern is one of the most useful design patterns, I'm sure you will find some use for it at both work and pet projects. I would like to end it with a question, have you ever used the bridge pattern? if so how was it? did you regret it?

Code is important, but you should also focus on the cohesion of the codebase.