Welcome back to our series on design patterns.

This week are tackling the Builder pattern.

It's another creational design pattern but is a bit different from the other pattern's we've discussed so far in this series.

“Builder pattern is more verbose than the telescoping constructor pattern, so it should be used only if there are enough parameters, say, four or more.” ― Joshua Bloch, Effective Java

If we google the builder pattern we will get something like this: 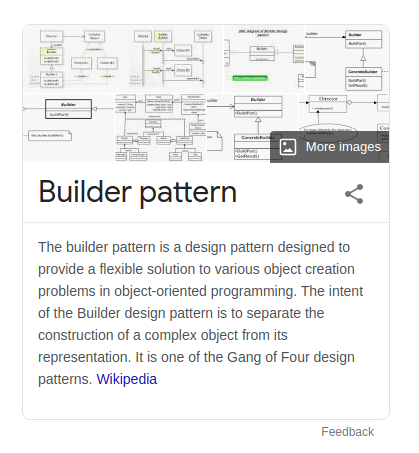 It's not wrong, but why does this have to sound so complicated.

The Builder pattern is a creational design pattern that allows us:

Let's imagine that you work for a construction company that builds houses. There are many different types of houses, with all sorts of variation.

How would we represent this in code?

One way would be to create a parent class called House and then create a bunch of subclasses for each variant.

This approach is bad because, what if we needed a house with a garage and a swimming pool?

We will be forced to create a new class called HouseWithGarageAndSwimmingPool

For every new variant, we are gonna have to create a new subclass, potentially duplicating code and making everything more complex and harder to maintain.

Another approach would be to simply create a constructor that accepts a bunch of parameters that determines it's properties.

You might be already thinking that this approach isn't very scalable. If we wanted to add more properties we just have to add a new parameter to our constructor. This may leave us with a huge constructor, with complex logic making it hard to maintain.

But what's the solution?

This is where the builder pattern shines.

First of all let's think for a second.

The construction of a house can be broken down into steps?

Yea, we can build the floor first, then the walls, then the roof, etc...

How about we put this into a separate builder class called HouseBuilder.

You might be thinking that there's just way too much code, and it's a huge hassle. But you didn't see the added benefit, with this we can create different kinds of house builders for example if we want a house made only with stone, or a house made only using clay. We can simply create two new house builder classes called HouseStoneBuilder and HouseClayBuilder. Plus, because we are using the same interface for each builder, the client code can easily swap between builders.

This is certainly much better than we had before, but we can make this even better. The client code doesn't have to know the steps in making these houses, so let us extract the building process to another class called the Director.

The Director class is like an engineer, it knows the steps in creating the houses, and uses implementations of the builders to create them.

Now that our Director class is ready, we can refactor our original client code:

Congratulations, you have just implemented your first builder pattern. Now it's much easier to new types of houses, as well as different configurations.

Knowing the Build pattern without using it, won't do you any good. You have to recognize opportunities where you can apply this pattern.

The Builder pattern can be useful in many real-world scenarios. I hope you got the gist of it, if not then feel free to leave your questions down in the comments.

If you enjoyed this article, share it with your friends and colleagues!