Update! You can find Part 2, where we explore coordinate frames for 3D systems, here.

Multi-sensor systems are becoming ever more common as we seek to automate robotics, navigation, or create a "smart" world. Any random assortment of sensors could be sensing any number of quantities, from barometric pressure, to temperature, to even more complex sensors that scan the world around us and produce 3D maps (like LiDAR). These multi-sensor systems often carry a great deal of complexity, to be able to learn about the world to the same degree that we can just by listening, feeling, and seeing our environment.

An important aspect of multi-sensor systems is how we relate these assorted sensing platforms together. If we are reading temperature, how do we use that value to make decisions? If we have multiple cameras, how can we tell if an object moves from the view of one camera to the next? Individual sensors on their own may be insufficient for making decisions, and therefore need to be linked together. There are a handful of ways we can correlate data, but one of the most powerful ways is to do so spatially. In this post, we're going to explore some of the language and tools we use for doing so.

It's all about location. No, really. All sensors have some spatial property, and it is by relating sensors together in this way that we can produce useful results! Knowing that a sensor measured 30° C isn't particularly useful on its own. Knowing that a sensor in your thermostat measured 30° C is a much more useful distinction. The same holds true for more sophisticated sensors such as cameras, LiDAR, accelerometers, etc. These "advanced" sensors are even measuring spatial quantities, which are the backbone of modern robotics and automation.

Many of the useful aspects of multi-sensor systems are derived by a spatial understanding of the world around us. Location helps us decide how related any two quantities might be; rather, it is in relating things spatially that our sensors can derive the context of the world around us. Many of the problems in integrating new sensors into a robotics or automation system are therefore coordinate system problems. To understand this, we first need to talk about coordinate frames and then discuss how to relate any two coordinate frames.

From the example above, we can pick out a few salient components of our Cartesian frame:

In order to spatially relate our sensors together, we need to give each sensor its own local coordinate frame. For a camera, this might be where the camera lens is centered over the image plane, or what we call the principal point. For an accelerometer, this may be the centre of where accelerations are read. Regardless of where this coordinate frame is defined though, we need to have a "local" frame for each of these sensors so that we can relate these together.

In the previous figure, we showed off two local frames A & B inside our world frame W. An important aspect in discussing coordinate frames is establishing a consistent notation in how we refer to coordinate frames and their relationships. Fortunately, mathematics comes to the rescue here as it provides some tools to help us derive a concise way of relating coordinate frames together.

Let's suppose we still have two coordinate frames we care about, namely coordinate frame A and coordinate frame B. We have a coordinate in frame A, pA, that we want to know the location of in frame B (i.e. we are searching for pB). We know that this point can exist in both frames, and therefore there is a functional transformation to convert to pB from pA. In mathematics, we express relations as a function:

Notice the direction here is not A to B, but rather B from A. While this is a bit of a semantic distinction, the latter is preferred here because of how it is later expressed mathematically. We will eventually define a transformation matrix, ΓBA, that describes the transform f above. The superscript and subscript are conventionally written this way, denoting the B←A relationship. Keeping many coordinate frames consistent in your head can be difficult enough, so consistency in our notation and language will help us keep organized.

Translations are the easiest type of coordinate transform to understand. In fact, we've already taken translation for granted when defining points in a Cartesian plane as offsets from the origin. Given two coordinate systems A and B, a translation between the two might look like this: 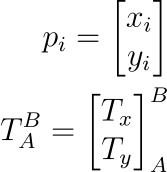 Pretty simple addition, which makes this type of transformation easy!

Rotations are probably the most complex type of transform to deal with. These transforms are not fixed offsets like translations, but rather vary based on your distance from the origin of your coordinate frame. Given two coordinate frames A and B, a rotation might look like so:

In the 2D scenario like shown above, we only have a single plane (the XY-plane), so we only need to worry about a single rotation. Mathematically, we would represent this as:

This rotation matrix assumes that positive rotations are counter-clockwise. This is what is often referred to as the right-hand rule.

To get a point pB from pA we then do:

The matrix multiplication is a bit more involved this time, but remains quite straightforward. Fortunately this is the most difficult transformation to formulate, so we're almost there!

The final type of transformation we need to consider is scale. Consider the following diagram, similar to the ones we've shown thus far:

The two frames are again translated, but this is not important for what we're looking at here. Notice that the axes of A are a different length than the axes of B. This is a visual trick to demonstrate what scale transformations do between two coordinate frames. An example of a real-world scale issue might be a unit conversion. Namely, B might be in units of meters, while A is in units of millimeters. This scale difference will change the final results of any point pB relative to pA, by a multiplicative factor. If we have an isometric scale, we might represent this mathematically as:

Now, in this way, we are using a scalar value to represent an isometric scale across both x and y axes. This is not always the case, as sometimes our scale is not isometric. In robotics, we typically treat most of our sensors as having an isometric scale, but it is worth showing the mathematics for how one might generalize this if the scale in x (sx) is different from the scale in y (sy):

By utilizing this more general matrix equation over the scalar form above, it is easy to abstract between isometric scales (where sx = sy), and affine transforms. Fortunately it's often very easy to get away with assuming that our scale is isometric.

Now that we know the three types of transforms, how do we put it all together? Any two coordinate frames A and B could have any number of translations, rotations, and scale factors between them. A transform in the general sense incorporates all three of these operations, and so we need a more formal way to represent them. Using our previous notation, we can formulate it as follows:

Keep in mind the order here:

With all the multiplications going on, this can get very confusing very quickly! Moreover, remembering the order every time can be pretty difficult. To make this more consistent, mathematicians and engineers often try to represent it as a single matrix multiplication. This way, the order is never confusing. We call this single matrix ΓBA. In plain English, we typically call this the B from A transformation matrix, or just the B←A transform. Unfortunately, however, you'll notice that not every operation in our above equation is a matrix multiplication, so the following doesn't work!

This would be fine for rotation and scale, but doesn't allow us to do anything about translations. Fortunately, we can work around this somewhat by leveraging a small trick of mathematics: increasing the dimensionality of our problem. If we change some of our definitions around, we can create a nuisance or dummy dimension that allows us to formulate ΓBA as:

Notice that our last dimension on each point remains equal to 1 on both sides of the transformation (this is our nuisance dimension)! Additionally, the last row of ΓBA is always zeros, except for the value in the bottom right corner of the matrix, which is also a 1!

If you want to learn more about the trick we're applying above, search for homogeneous coordinates or projective coordinates!

Try it for yourself with these Python functions! Find this and the code used to generate our above figures in our Tangram Visions Blog repository.

Code pertaining to posts made on our official blog!

This repo holds code to generate the assets used in the company blog for Tangram Vision! The main page of the blog can be found here.

See the README in each directory for instructions on installation, operation, and output.

One to Many Sensors

Exploring Ansible via Setting Up a WireGuard VPN

Contributing to this project

This is an open-source project; if you'd like to contribute a feature or adapt the code, feel free! We suggest you check out our contributing guidelines. After that, make…

What was it all for?

Knowing how to express relationships between coordinate frames both in plain English (I want the B←A or B from A transformation) and in mathematics (I want ΓBA) helps bridge the gap for how we relate sensors to each other. In a more concrete example, suppose we have two cameras: depth and color. We might want depth←color, so that we can fuse semantic information from the color camera with spatial information from the depth camera. Eventually, we want to then relate that information back to real world coordinates (e.g. I want world←depth).

Coordinate frames and coordinate systems are a key component to integrating multi-sensor frameworks into robotics and automation projects. Location is of the utmost importance, even more when we consider that many robotics sensors are spatial in nature. Becoming an expert in coordinate systems is a path towards a stable, fully-integrated sensor suite on-board your automated platform of choice.

While these can be fascinating challenges to solve while creating a multi-sensor-equipped system like a robot, they can also become unpredictably time consuming, which can delay product launches and feature updates. The Tangram Vision SDK includes tools and systems to make this kind of work more streamlined and predictable — and it's free to trial, too.

We hope you found this article helpful—if you've got any feedback, comments or questions, be sure to tweet at us!