There is no universal standard on good or bad. Here are my AAA principles on defining good software architecture:

Accountable >> Autonomous > Amortized. In the 90s, code reuse (Amortization) is hot in object-oriented community. Then SOA/DDD emphasize a lot on Autonomy. But I found both Amortization and Autonomy are ambiguous for guiding the boundary definition in practice. It is hard to convince people, X is better than Y. Really, the functionality of a module should derive from its responsibility.

Developers can not estimate

"Accountable" really is the key here. I see "the lack of accountability" is the biggest crisis of software development, it is bigger than "unable to manage so-called complexity".

It is not a secret that developers can not estimate. It brings a lot of very fundamental problems to good software engineering:

To solve this problem is not about figuring the magic of story estimation, instead, we should not need to estimate if we are working with the business owner as the same team. Every software team will have one and only one corresponding business team, they share exactly the same OKR. It is important to be responsible for only ONE thing. 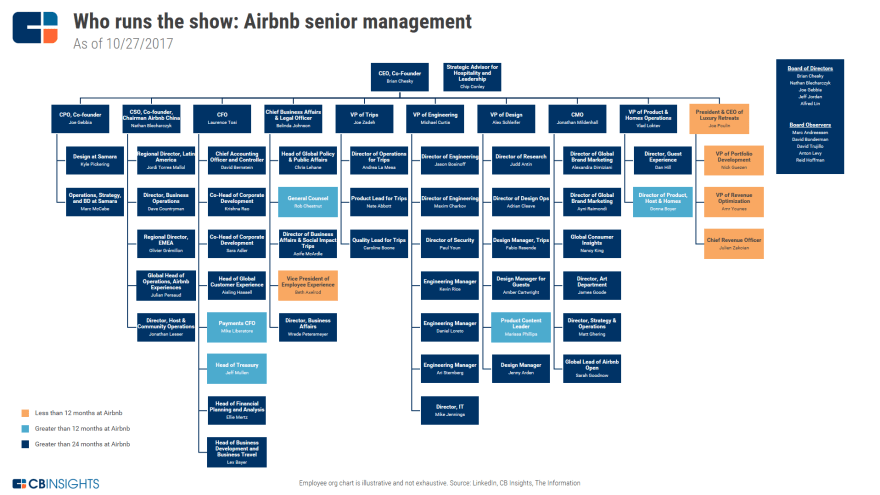 This is a typical organization chart of the business. Every smaller team will have their OKR aligned with their parent team. The key results of OKR will be measurable so that each team can be accountable for something.

Typical bad software architecture looks like this: There are a lot of small teams owning their micro-services. The business owner typically needs support from multiple micro-services to accomplish their goal. Every requirement will need to be communicated to different software team again and again. The software team can not name a clear business objective for their micro-service, and because of that, they can not tell what contribution are they making to the business.

Let me emphasize again: the NO.1 goal of software architecture is to make software team accountable for the business.

In the large scale, architecture is about bounded contexts (read DDD for more details). This is just the business organization chart reflected in the software world: 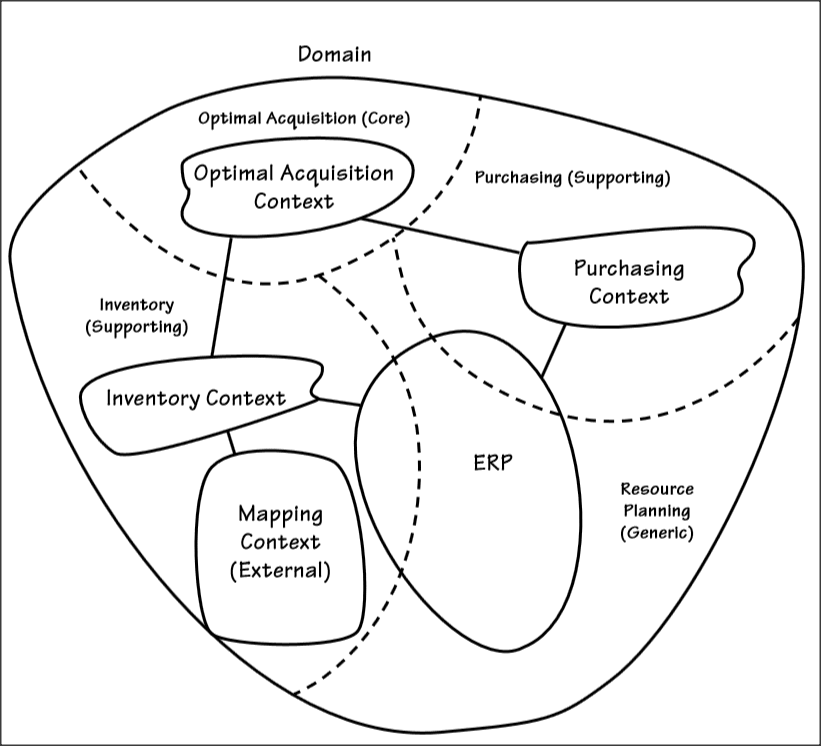 One bounded context is still too large for one team. At least we believe that is the case in micro-service mindset. How to break it further down into more manageable pieces? My model is "cyberspace & agents". What we are building as programmer essentially boils down to two things:

The cyberspace is a virtual world just like the physical one we live in, it is based on causality. There are two kinds of laws:

Gravity is an example of natural law, "you pay your debt" is an example of social law. Both of them works the same way, given some causes, some effects must happen according to the law. We use C/C++/Java/Go/... whatever you like to describe it. From ray tracing algorithm, word processor to the e-commerce platform, it is more or less the same about baking some rules into the system. The "law" need to be static and predictable, like cement, builds the real world.

On top of the cyberspace we built, we as human interaction with each other, from social network to trading. The role played by the human is increasingly replaced by artificial intelligent agents we wrote. For example, instead of editors pick the content, it is the robot that is generating the news and preparing the homepage for you. The agent is getting more and more complex, someday they will emerge from cyberspace to physical space.

The two kinds of code work very differently. The cyberspace derives cause to effect to maintain natural/social order. The intelligent agent gathers effect to infer a model to maximize some objective. It is crucial to distinguish the intelligent part from the rest of the system. We as human need the rules to be static to build stable expectation. If the "law" keeps changing, the cyberspace will be like a "magical" place which lose the connection with our experience in the real world. 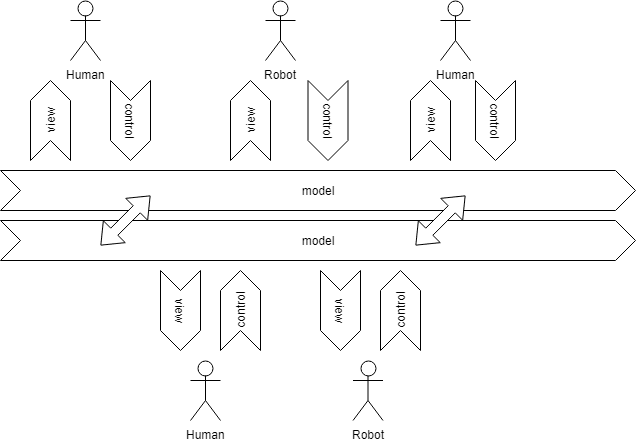 The model, the view and the control is the cyberspace. Human and robot are the intelligent agents. The model maintains the data integrity according to the causality defined by the natural or social law. The view and control provide an interface to human/robot for their convenience.

The cyberspace part is still too large. It is normally multi-step business process. For example 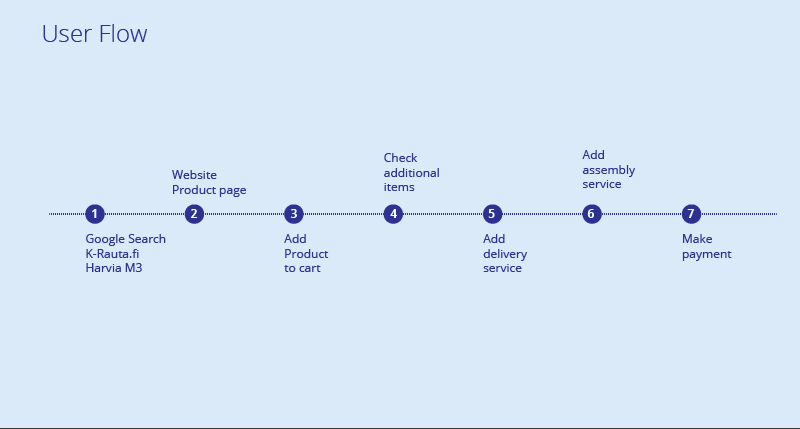 And bounded contexts correlate with each other. For example 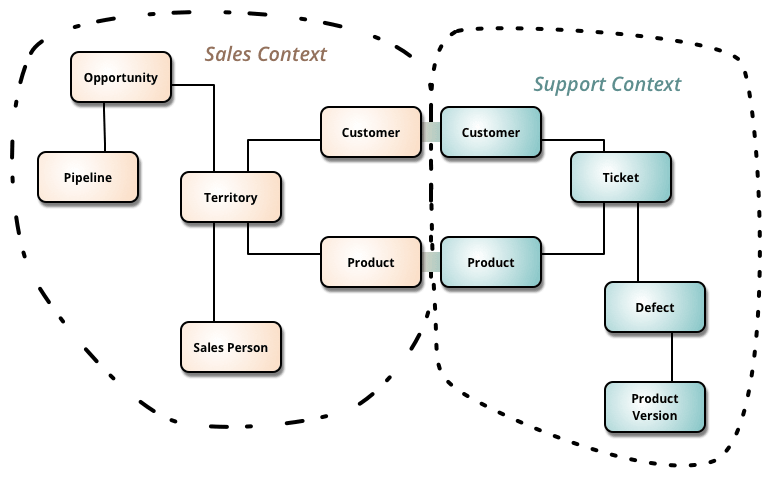 The problem of accountability originates from the programming language we use does not cover the whole causality chain. We can draw a flow chart on the whiteboard as a whole, but we have to break it down into many small services/functions to implement it. The workflow engine is frequently brought up because it mapped so nicely to the problem domain, but BPMN is not a programming language.

There is strong causality between the steps. The promotion displayed on the product detail will need to be displayed in the shopping cart, will be displayed in the checkout, and will be applied to the final receipt. The "function" we use, can only be used to describe casualty within 500ms time span. We have to chop the process into small steps, or into different services serving users of different roles, the causality is hidden inside the messy implementation. The software runs like a relay match, one service pass on the responsibility to another. Ideally, the code should reflect the flow chart, read like the flow chart.

To make it worse, there is no hard line on who should do what, which frequently leads to debate on responsibilities between teams. Highly political environment makes developers unhappy. Meanwhile, ironically there is no one can be accountable for the whole thing when things go south, as everybody just cut a small piece from the whole.

The current best practice to fix this problem is to put a facade team on top of everything. "Ownership = Authorship", we are only willing to own what we write. This is human nature. To give these guys a sense of ownership, we allow a thin proxy/wrapper or orchestration service to glue micro-services back. This often will lead to low autonomy.

There is one more thing that is broken. The module unit provided by the language, such as assemblies/packages/classes used to be the unit we collaborate with each other. This is no longer true. Software modules need to be versioned and deployed separately to support multiple teams working independently.

But do we "always" need to use different language with different tools for different microservices? The language difference and disconnected tooling make the cross-team communication even harder. You can own your process, own your service, but that should not stop you from sharing the same language with your buddy fellows. One programming language plays 3 different roles: it connects the machines, the developer and the team. Today, the programming languages served primarily as tool to connect machines with people, leaving teams disconnected in the big picture.

The solution should think the software as a whole, instead of being limited by the narrow view of single "os process". The cost of introducing a new micro-service should be as cheap as starting a separate thread backed by function in a separate package. The ideal programming language should not treat all function calls evenly.

Is this how they sell 'Kubernetes'?

The Evolution of Software Testing