How to Secure Excellence with ARIS Test Designer

Looking at the main reasons why IT and transformation fail, we see testing is a main pain point. It shouldn’t be. You've got everything in your hands to drive success thanks to process–driven testing.

I’ve got 99 problems but testing ain’t one—are you sure?

A majority of companies, or better said project managers, are concerned about the risks related to testing. Indeed, the complexity of testing and its “time budget” in the project schedules are often underestimated. Furthermore, bad test coverage leads to incomplete testing with bad influence on VIPs (Very Important Processes). But being concerned is obviously not enough as we still have a lack of consideration for testing. Let’s have a quick look at some areas:

Thus, lack of comprehensive testing and risks that come along with bad testing are immense. This may lead to failed transformation, unsuitable application configuration, lack of quality end–to–end processes, postponed or even failed go–live and in the end to ineffective end users, bad acceptance of the new processes and unhappy customers. All of these issues will cost a lot: You'll lose time (which is money) in the project and while business is running, operations and system quality will suffer, which will lead to unsatisfied customers who may turn their backs on your company.

IS THAT WHAT YOU WANT?

Surely not! Now let’s see it from the positive side. Bad testing is bad for your business but good testing benefits are much higher than bad testing costs – so let’s go ;–) The solution is process– driven testing. Not kidding. Process–driven testing makes sure your VIP processes run the way they should. This secures high– quality processes and smoothly working applications, which in return lead to happy and loyal customers. In fact, it supports your successful transformation. And you won’t believe it but taking your time for end–to–end process testing will save you time. Testing will help you consider the right processes and unveil issues early enough to solve them.

Process–oriented test design ensures processes work the way they should

ARIS Test Designer enables process–oriented testing so that you can rely on fast, easy and comprehensive test design. How? ARIS Test Designer gives your end "power" users the chance to design tests by themselves in taking the blueprint – process – information and reusing it to create the different tests.

Let’s have a detailed look on how it works. ARIS Test Designer supports:

The test team, commonly the power or end users, will go in ARIS and create a test project. Here, they can select the processes that should be tested and, via drag–and–drop, assign those to the test project. It’s the first step to design the scope of the tests. They can then select a process and based on a “recording” mode go through the process and select the path to be tested.

When a process is straightforward, it’s simple; but for more complicated processes, the knowledge of the business is needed. This recording mode also works on several processes so that the design of end–to–end tests scenarios (you may call them integration tests), such as order–to–cash, are supported as well. Which scenarios are important and happen again and again?

Which process exceptions are, let’s say, less important and do not need to be tested right away? All this knowledge is included in the test path design if you let your end users do it. Additionally it will increase end–user acceptance of new processes and systems as they suddenly have more influence on the business. 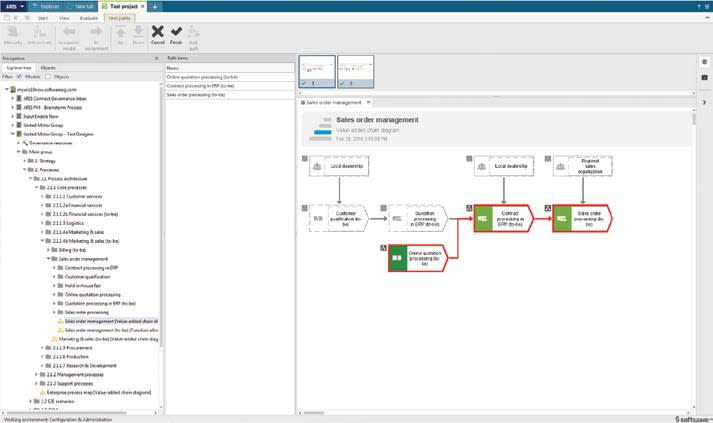 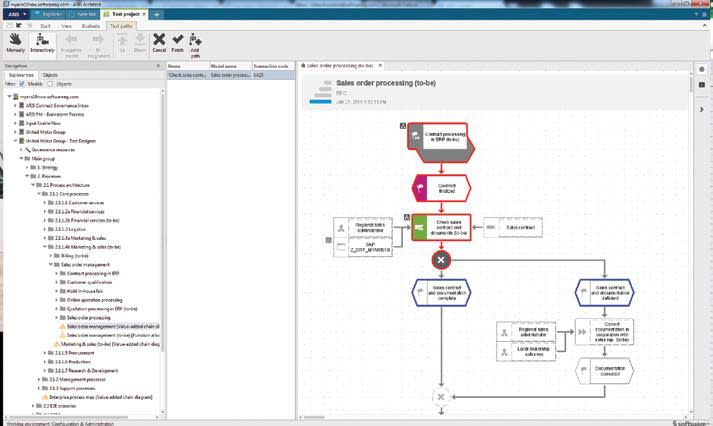 Of course sometimes you will need to create comprehensive test cases and go through all possible process paths. As having two or three decisions within one business process already increases the number of possible test paths, you can imagine how many possibilities you will have in a complete business case. To help you, ARIS Test Designer offers automated or semi–automated test design. The user designing the tests can choose between several options: Either automatically create all possible test paths or generate a selection of automatically proposed test paths. 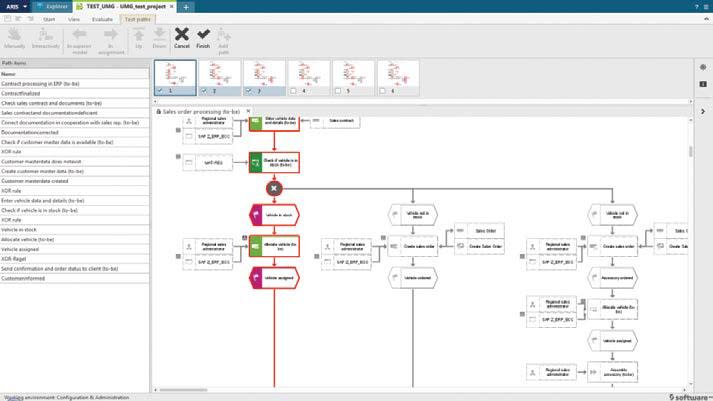 Testers need more than just the process flow information. That’s why ARIS Test Designer automatically generates test case documents. You just run a report and select the information you want to use in your test case documents. For example, do you want to: Include the process graph or not? Add the test data so that it can be reused directly or not? Insert model description or not? Press the report button, and the test case is created and ready for use. 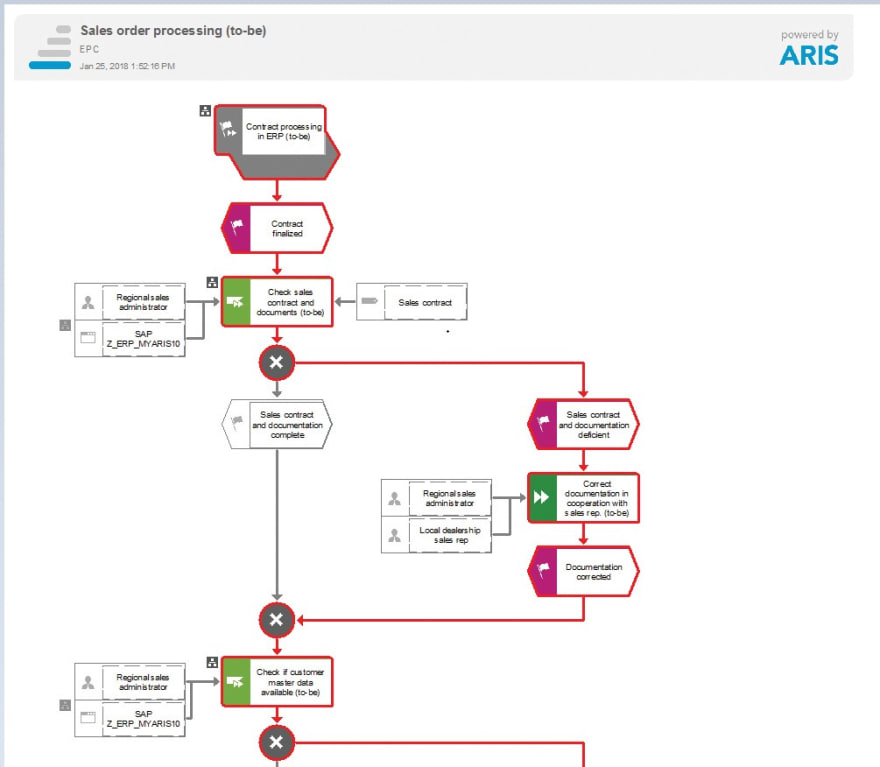 Process–driven testing is important, and business information from ARIS brings great value. But ARIS is NOT a test management tool by itself. That’s why ARIS Test Designer supports the export of test cases and descriptions to standard testing applications such as standard Microsoft® applications (for smaller usage and companies) as well as leading testing tools such HP® Application Lifecycle Management (the import is available as a tech preview feature in patch 12.55p02). From there, process–based test information can be reused and managed in the test applications.

Test design in ARIS leads to excellence– nothing more, nothing less

All in all, ARIS Test Designer offers a comprehensive solution to make sure your testing leads to the excellence you aim for:

For more details watch the webinar on ARIS Test Designer.

Read more on how ARIS leads to excellence on our website.

Hey techies,Here is my repo link to contribute your own codes and projects for the Hactober-fest-2022. Happy Hacking...!

Data Services for the Masses

Once unpublished, this post will become invisible to the public and only accessible to tonipetov.

Thanks for keeping DEV Community 👩‍💻👨‍💻 safe. Here is what you can do to flag techcommunity:

Unflagging techcommunity will restore default visibility to their posts.