In my previous articles about winget I talked about installing packages but I did not talk about producing packages for Windows Package Manager. So let's set things right. 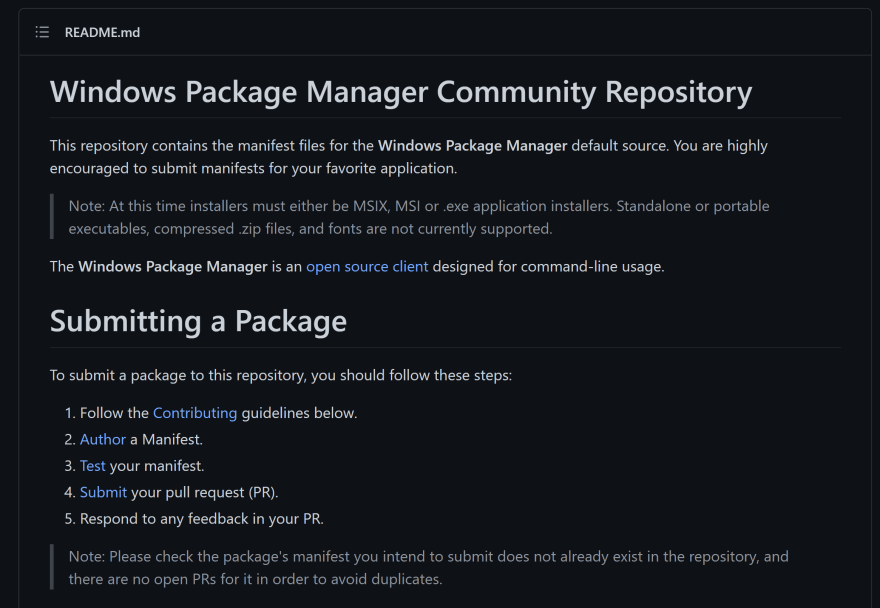 As a package creator you probably do not want to create and update this app manifest manually. Luckily for you there is a tool to do that for you.

Windows Package Manager Manifest Creator aka WingetCreate is a tool "designed to help generate or update manifest files for the Community repo" (quoting the readme of WingetCreate repository). At the time of writing it is still in preview but you can already use it to help you with your manifest files. You can download the installer from this link but of course it is available from winget: winget install wingetcreate.

The main commands are New, Update and Submit.

It allows you to create a new manifest from scratch. If you don't really know where to start to deal with manifest files it is a nice way of getting started. Yet having a look at existing manifests in the winget community repository can be sometimes more efficient.

It allows you to update an existing manifest, that is to say to create an updated version of your manifest when you have released a new version of your application (so new version number and new installer url). You can use this command to submit your updated package to the Windows Package Manager Community Repository. In my opinion it is the most useful command from WingetCreate as it can be easily be integrated in a build pipeline to publish your installer.

It allows you to submit an existing manifest (you created earlier on disk with the create or update command) to the Windows Package Manager Community Repository automatically. Basically what it does it that is uses the Github personal access token you give it to create a Pull Request with your manifest in this repository.

If you look at the settings command you will see that you can specify the name of the GitHub repository to target for your package submission. This is really interesting if you want to host a private source for winget available to your organization only where you will publish applications for related to your business needs and that you don't want to make available publicly.

WingetCreate is a really helpful tool to create, update and validate a manifest for you winget package. Still you probably don't want to manually run WingetCreate each time you release a new package version. So let's see how to automate that with GitHub Actions.

Why using GitHub Actions to demonstrate the automation of app manifests upgrades ?

In my daily work, Azure Pipelines are the pipelines I used to do CI/CD and they are great. Currently they offer more functionalities than GitHub Actions and as the code I develop is hosted in Azure Repos it makes more sense to use the Azure DevOps built-in CI/CD tool than something else (although Azure DevOps does not enforce at all you to choose their tools). However there is already in WingetCreate's readme a section with a link to an example about using WingetCreate with Azure Pipelines, but there is no example with GitHub Actions.

Moreover I think many applications that are available or will want to be available as a winget package are open source applications whose code are hosted in a GitHub repository and that are already using GitHub Actions for their CI/CD. So I though it could be useful to have an example of using WingetCreate with GitHub Actions, especially as GitHub has this concept of "releases".

An interesting use case for with Nushell

Nushell is a cross platform shell written in Rust. Nushell's developers took the best of existing shells (like the structured data approach from PowerShell) and created a shell that feels modern, easy-to-use and very useful in my opinion.

There was a GitHub issue to support the new official Windows package manager so I though it was the opportunity to contribute to Nushell. Contributing to this project was something that I had not been able to do yet because I did not know Rust, writing CI/CD pipelines however is something I can do.

Nushell already uses GitHub Actions for its continuous integration and to create releases. If you are not familiar with GitHub releases you can read the official documentation but basically a release is a version of your software (corresponding to a git tag in your repository) that you make available with release notes and binaries files. 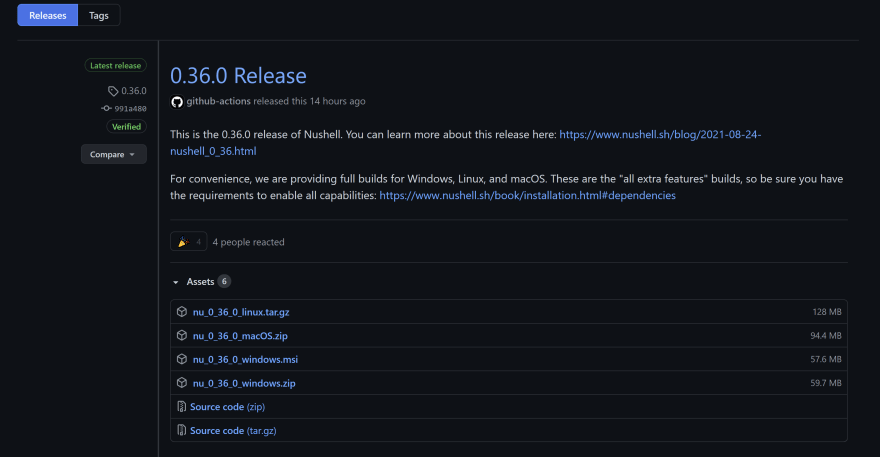 Therefore, the idea was to update Nushell manifest with the latest version of Nushell using WingetCreate each time a new release of Nushell is published.

Triggering a new workflow from a release event

Automating the app manifest upgrade of Nushell just meant creating a job in a GitHub Actions workflow that would call WingetCreate with the new version number and the new installer url.

I first wanted to modify the existing Nushell GitHub Actions workflow that was creating the releases by adding a new job at the end of the workflow just after the release was created. Well this is was a bad idea, I pushed this change and during the next release of Nushell the workflow failed because I did not pay attention the workflow was creating releases in draft, so the installer url of the new version did not exist when my job called WingetCreate.

Because of that I decided to create a separate workflow that would be triggered each time a Nushell release is published. In Nushell this is done manually (passing from draft to release) but even if it were done automatically by the release workflow I think it is a better idea to have a specific workflow triggered by the publication of a release.

I really like how it is possible with GitHub Actions to trigger on many different GitHub events. It is something that seems more limited in Azure Pipelines.

This job will only contain one step that is the execution of the commands to call WingetCreate. These commands will be in PowerShell as this is the default runner (pwsh) in a windows job.

First we need to download latest version of WingetCreate by using the following command :

Second we want to retrieve the version number and the installer url of the new package. These 2 pieces of information will be needed as parameter to the WingetCreate update command. We can find these in the github context which contains the release event that triggered the workflow. We are using these 2 lines of PowerShell to get assets associated to the release and filter on the msi file which is the Windows installer of Nushell.

💡 I just though that instead of doing this in PowerShell we could have done this in Nushell, which would have been fun 'using Nushell to provide a new version of Nushell' but as it is not installed by default on windows agents it would mean a loss of time each time the workflow runs.

Third we can call the WingetCreate update command by specifying the version, the url of the installer, and a Personal Access Token that will be use by WingetCreateto make the Pull Request in the Windows Package Manager Community Repository. This PAT needs to be created by a maintainer of the repository with the permission and added to the secrets of the project.

Here you can see a run of the workflow in GitHub:

Overview of the created workflow

You can find the complete workflow below and here in the Nushell repository.

Here is what a Pull Request generated by the GitHub Actions workflow looks like:

We have introduced the notion of source for winget packages, and in particular the Windows Package Manager Community Repository where we can open PR to submit a new application or new versions of an existing application. We have seen how Windows Package Manager Manifest Creator could help us doing that and how it could be automated from a GitHub Actions workflow like it was done for the Nushell project.

Do not hesitate to copy some of the GitHub Actions workflow I showed you. I hope this will inspire you to do the same to distribute your applications through winget.

A big thank you to Edward Thomson who explained to me how to retrieve GitHub Actions contexts in PowerShell. Thanks also to Darren Schroeder and Jonathan Turner who supported me to set up a workflow that publish new releases of Nushell in winget.

Making your project available through Homebrew

Alexandre
I am a software developer living in Bordeaux. I am a .NET and Azure enthusiast, primarly coding in C# but I like to discover other languages and technologies too.
Week 46, 2022 - Tips I learned this week
#dotnet #pnpm #vscode #tooling
Discussion around API clients
#http #tooling #productivity #api
How did I automate the setup of my developer Windows laptop?
#productivity #windows #install #automation

Once suspended, techwatching will not be able to comment or publish posts until their suspension is removed.

Once unsuspended, techwatching will be able to comment and publish posts again.

Once unpublished, all posts by techwatching will become hidden and only accessible to themselves.

If techwatching is not suspended, they can still re-publish their posts from their dashboard.

Once unpublished, this post will become invisible to the public and only accessible to Alexandre.

Thanks for keeping DEV Community 👩‍💻👨‍💻 safe. Here is what you can do to flag techwatching:

Unflagging techwatching will restore default visibility to their posts.