Flux was presented in May 2014 and quickly become a new movement in web development. Today Flux isn't that widely used. The driver seat was taken by its offspring Redux. Anyway, it's still interesting to discuss some of the issues with Flux's architecture about which you don't even think in Redux.

This one was famous:

"Cannot dispatch in the middle of a dispatch"

This error had to mean that you did dispatch() in a wrong time and need to move it somewhere else. The most brave people just ignored it by wrapping the dispatch into setTimeout(). But there were many other hacks to avoid it.

Flux's official website and issue tracker have no good explanation of how to deal with this problem only recommending not to dispatch. Unfortunately, there're too many scenarios when it's unavoidable. As you'll see later this error is only a symptom of a much larger issue.

Flux describes a store as a state manager of a domain. That means you will have more stores than 1. Same time, some stores may depend on another, what is described by calling waitFor() method.

The App is the root and shows a login screen instead of its children while user isn't authenticated. The Posts component starts loading its data in componentDidMount() hook what is the recommended practice. Both these components depend on different stores: AppStore and PostsStore. The PostsStore may also depend on the AppStore too, but it isn't important.

Let's look at the time when user just authenticated and the app got a positive answer from the server with user's session: 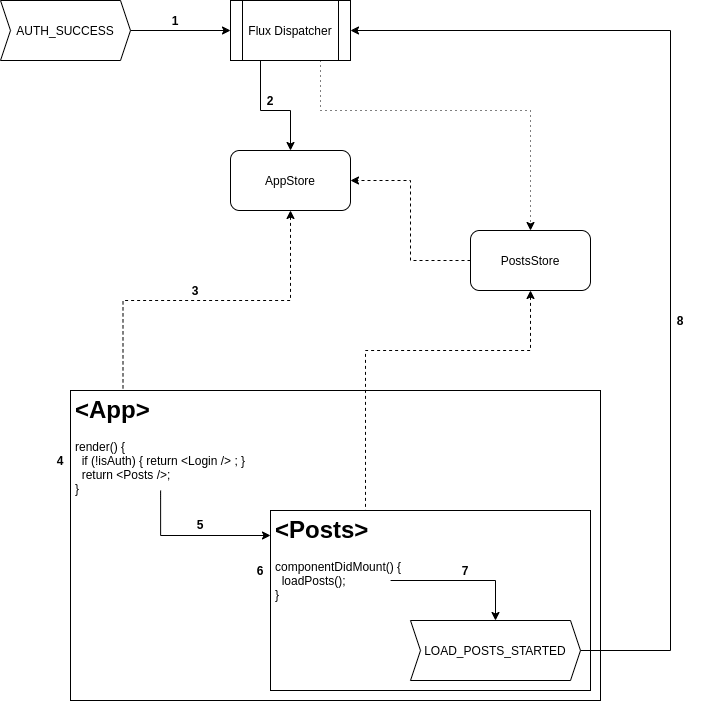 Actions are represented as arrow-like blocks. Let's follow the diagram:

Now look at the #5. When render happens we're still in the middle of dispatch. That means that only a part of stores were updated and we're looking at inconsistent state. Not only we're getting errors in totally normal scenarios, but even without errors the situation is hardly better.

The most popular solution to this entire scope of issues is to fire change event in setTimeout(). But this removes synchronicity of React rendering. Theoretically, event subscribers may be called in different order, because order of execution of setTimeout callbacks is unspecified (even if we know that browsers just add them to a queue).

I like another solution which isn't that well known, but lies on surface. Redux works this way and is consistent, error-less, and synchronous. The whole dispatch process inside Redux may be written as such:

It calculates the new state and only then calls subscribers. The state is always consistent, and the entire process is like an atomic DB transaction.

In Flux this approach would be more verbose, but still doable. Stores manage their subscribers individually, but they could return a function to dispatcher. This function will call store's emit(). Most of the time stores don't pass event arguments, so they would just return the emit itself. In case if you want to optimize some things and filter events based on args, a store may return a custom callback.

Taking Flux Dispatcher as the base only a few places require tweaks:

It requires some error handling code, but the idea should be clear. This is how a store may look like:

The rest of the app's code stays the same.

This solution has not that big refactoring penalty, but gives you state consistency, removes unnecessary errors, and keeps update-render process synchronous and simple to follow.

Atomicity is a nice property which we hadn't in Flux and not always notice in Redux. Redux is also more simple, maybe that's why we (the community) haven't seen implementations like Atomic Flux Dispatcher and moved forward straight to Redux.

Originally posted on Medium in 2019.

Once suspended, the_spyke will not be able to comment or publish posts until their suspension is removed.

Once unsuspended, the_spyke will be able to comment and publish posts again.

Once unpublished, all posts by the_spyke will become hidden and only accessible to themselves.

If the_spyke is not suspended, they can still re-publish their posts from their dashboard.

Once unpublished, this post will become invisible to the public and only accessible to Anton Alexandrenok.

Thanks for keeping DEV Community 👩‍💻👨‍💻 safe. Here is what you can do to flag the_spyke:

Unflagging the_spyke will restore default visibility to their posts.