The Battle for the Hearts and Minds of Developers

A long time ago, in a galaxy not far, far away (our galaxy to be exact), Microsoft ruled the tech world as the dominant development Empire, with the most powerful and extensive ecosystem of independent software vendors contributing to their Death Star, the Windows platform.

The world has changed.

Today, Windows has been eclipsed by new and more powerful platforms driven by Apple (App Store and iOS), Google (Android), and Amazon (AWS).

Developers no longer look at Microsoft as the evil, closed-source Empire. Instead, Satya Nadella and his merry band have become the new rebels, contributing to open source everywhere they can and dominating the world of GitHub contributions.

Why does Microsoft, once the closed-source Empire, care so much about open source?

Why did they pay $7.5 billion to acquire GitHub, de facto home for open source repos around the world?

Why have they spent so much time and effort developing a new, open source, and free text editor, Visual Studio Code, which has quickly rocketed to the top in developer popularity?

The answers to Microsoft’s strategy for the future lies in its past.

First, it’s important to understand why platforms are so valuable.

When IBM (the original tech Empire) decided to outsource their PC operating system to Microsoft, it made Microsoft the de facto operating system of the PC era. Unlike Apple, which wanted tight control of its ecosystem at the time, Microsoft invited developers to build on their OS as an open platform.

Developers and independent software vendors (ISVs) formed an ecosystem around the platform that created a world of apps. Windows apps proliferated across different use cases for different industries. As a result, the total value of the platform widened and deepened, roots weaving into every facet of every industry and business.

It created a cyclonic effect, a virtuous spiral of users, developers, and increasing value.

The more users, the bigger the market…. 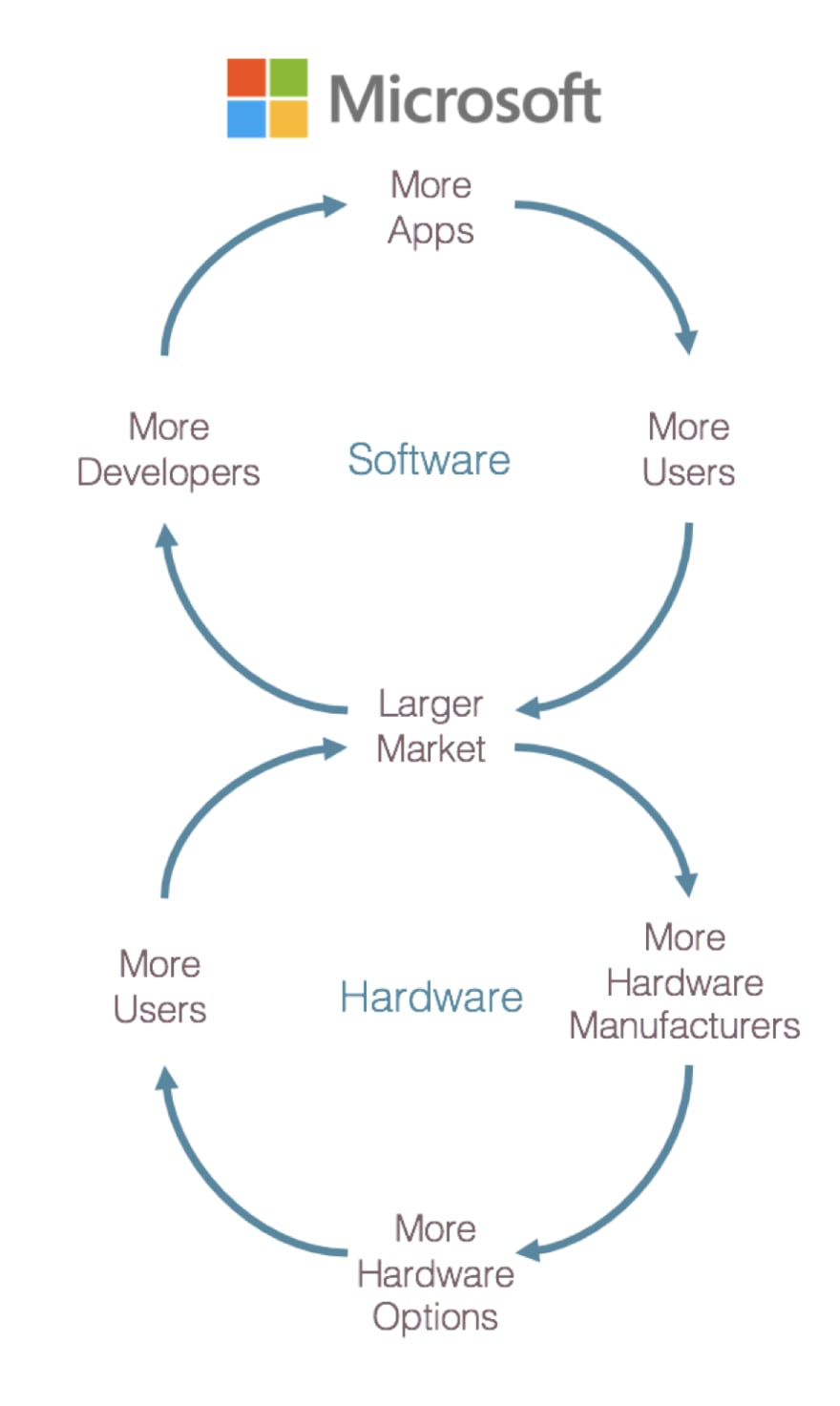 These twin cyclones fed each other, and Microsoft mushroomed into the world’s first great application platform ecosystem.

Developers built their entire careers, decades of training and expertise, working in the Windows ecosystem. Many of them will continue to work on Windows until they retire—lifetime lock-in.

Cyclone effects and career developers are why platforms are so valuable and enduring. Today, Windows, which is a slowly shrinking ecosystem, still has more than a billion active users.

Microsoft didn’t just build a mega platform once. They did it again with Windows Server and Microsoft’s database, MS SQL Server, both of which formed valuable platform ecosystems of their own.

As a result, the company soared and became the world’s most valuable company.

But they became too aggressive, unfairly leveraging Microsoft’s incredible assets.

With the enormous advantage of owning the platforms, Microsoft built its own competitive apps, such as the Office suite, or bought ISVs wholesale, adding to its scale and success. And they built products and apps for free, like Internet Explorer, to destroy would-be competitors.

In the end, a federal judge ruled the company “violated the nation’s antitrust laws through predatory and anticompetitive behavior and kept ‘an oppressive thumb on the scale of competitive fortune.’”

Antitrust charges helped defeat Lord Gates and force him into retirement, but they didn’t do it alone.

Developer Land of the Free

It took more than government regulation to blow up the Microsoft Death Star.

Ironically, one of the most important moments in the history of the digital era includes the authoring of a legal license.

If Stallman was the legal architect, then Linus Torvalds was the developer that fired the impossible shot that triggered the cataclysmic chain reaction.

In perhaps the humblest beginning you could imagine to a major turn in the innovation cycle, Torvalds posted his intentions in an early newsgroup in 1991:

Hello everybody out there using minix –

I’m doing a (free) operating system (just a hobby, won’t be big and
professional like gnu) for 386(486) AT clones. This has been brewing
since april, and is starting to get ready. I’d like any feedback on
things people like/dislike in minix, as my OS resembles it somewhat
(same physical layout of the file-system (due to practical reasons)
among other things).

I’ve currently ported bash(1.08) and gcc(1.40), and things seem to work.
This implies that I’ll get something practical within a few months, and
I’d like to know what features most people would want. Any
suggestions are welcome, but I won’t promise I’ll
implement them :-)

PS. Yes – it’s free of any minix code, and it has a multi-threaded fs.
It is NOT protable (uses 386 task switching etc), and it probably never
will support anything other than AT-harddisks, as that’s all I have :-(.

He called his OS Linux.

In 2017, Linux-based server shipments grew at a five-year compound annual growth rate of 13.9 percent. Microsoft Windows, on the other hand, continued to decline at 4 percent, despite significant ongoing investment and micro-innovation. Closed legacy UNIX systems (AIX, Solaris, and HP-UX) have been plummeting even faster at an 11.9 percent decline rate.

Linux is the clear future when it comes to servers. More developers create more innovative apps on Linux, often for free, creating a virtuous cycle that has given rise to a new world order.

Nested inside these mobile platforms are other dominant platforms. Facebook, for instance, is an app that runs on iOS and Android and in Chrome. But Facebook is a platform as well, enabling apps such as Zynga to form and go public within its own ecosystem.

The Biggest Platform of All, the Cloud

And that, of course, brings us to the cloud.

Today, Amazon runs the biggest platform of all in physical scale—Amazon Web Services. While Amazon dominates infrastructure as a service, the lowest and most valuable layer of cloud platforms (because it can serve the largest addressable market of software use cases), Microsoft actually drives more cloud revenue, when you include Office 365 and Microsoft SQL Server run as a cloud service.

So why has Microsoft been so eager to embrace open source and developers, releasing a free, open source code editor and strengthening developer repos by acquiring GitHub?

Because their goal is to help grow the most powerful developer platform again.

Satya Nadella knows that the dominant era of Windows has come to an end, and developers are still the key. What better way to influence developers, to win their hearts and minds, than to build tools where they code and where they store their code? Where they spend most of their time as developers?

Just look at the ease in which VS Code enables developers to build upon Azure. In the end, if they can influence developers and create a channel of apps into the Azure cloud, Microsoft may be the leader of the once and future dominant developer platform.

Love VS Code as much as we do? Make it even more powerful with Code Time, our open source extension.