Today we will be learning on a very important concept provided by Angular - Pipes
The main use of Pipe is to transform the appearance of the data before showing to the user.
The analogy which comes to my mind when ever I talk about Pipe is the water filter. A water filter takes water as input and as an output it provides us clean water, so it basically does some transformation to the water inside it.
Similarly the Angular Pipes also takes the data as input and does some transformation and sends out the transformed data.
At this point you might be thinking but why do need to transform?
The main reason is to improve the readability.
Angular already provided thirteen (13) built in pipes. Lets see each of them one by one - 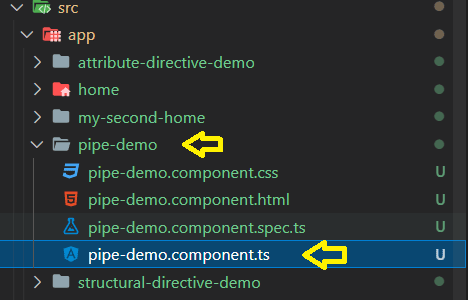 CurrencyPipe
It is used to format the currency value as per the given country code/ currency/ decimal/ locale information.
use-case
Suppose you have an e-commerce application where you store only the price of the products, but before showing to the user you need to add the currency value (either at the beginning or at the end).
In this scenario currency pipe is the best choice.

Lets understand the syntax before diving into the example -

value_expression - The input value that needs to be formatted

currency - The name of the pipe

currencyCode - ISO 4217 currency code (its a standard)
It is Optional.
It is of String type.
Default value is USD.

display - This determines the way to display the currency.
It can be of type symbol (the currency symbol eg $)
or code or symbol-narrow or our own custom string.
It is Optional.
Default value is Symbol.

digitsInfo - It is the digital representation of currency
value. Keeps track of how many digits to be displayed before and after decimal point if any.
It is of String type.
It is Optional.
Default value is undefined.

locale - It It represents the locale format rules.
Default value is the project locale if set else its undefined. It is also optional .

Now lets dive into the practical part of it.

Lets create a variable in the component.ts file and name it expense, and initialize it with the value 786.4589

Now, lets jump into the component template file and paste in the very simple code to start with -

Now if you start the application and navigate to localhost:4200 in your browser then you must see the following output -

Here the default currency is taken is USD and the display as symbol.

Now say if you want to change it to your currency unit, say I am putting as INR (that's Indian Rupee), then the code will become like

Now lets paste the below code in the component template file -

You will see the output as - 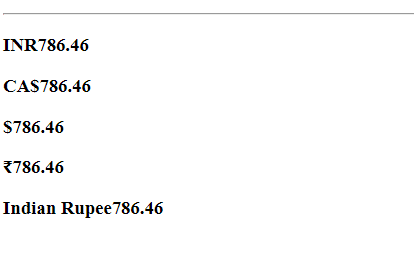 Above output Explanation
{{ expense | currency: "INR":"code" }}
Here we are passing the currency code as INR and asking Angular to use the code only so in output you will see INR before the value is printed.

{{ expense | currency: "CAD":"symbol" }}
Here we are passing the currency code as CAD that is Canadian Dollar and asking to print the Symbol of it. So the output is
CA$

expense | currency: "INR":"symbol-narrow"
Indian rupee does not have symbol-narrow so the default rupee symbol is displayed.

expense | currency: "INR":"Indian Rupee"
If you want to display a custom value then that is also possible. You can pass as a parameter

We can also customize the decimal points of the currency value. For that we need to pass the digitsInfo parameter.

Lets paste in the below code -

You should see the below output -

If decimal points are not needed then we need to pass digitInfo parameter fractions as 0.

I will walk you through the locale part once I cover the internationalization and localization part.

Stay tuned for the remaining Pipes available in Angular.

Stop being scared of InjectionTokens