React state is the bread and butter of a react app — it’s what makes your app dynamic. React state lives in useState, useReducer or in this.state of a class component, and changing it updates your app. But then there’s a vast ocean of state not managed by React. This includes ref.current, object properties, and, really, anything other than react state.

React state is a safe default — if you put a dynamic value somewhere else, the component won’t re-render. But stuffing values that don’t need to be managed by react into state is more sneaky. It rarely results in visible bugs, but makes your components more complex and slows them down.

In this post, we’ll discuss the difference between react state and non-react state, see when state can be safely replaced with a ref, and learn a few optimizations based on this distinction. 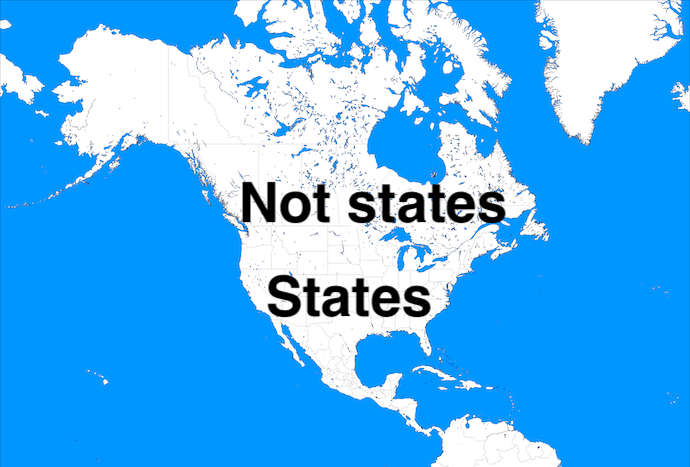 What are we even talking about?

Let’s first spend a minute reflecting on what’s so special about react state, and what types of non-react state exist, and how they’re so different, but still useful.

Now, let’s see where else in our app a state can live. “Anywhere else” is correct, but too vague — let’s make a list of common locations:

This list could go on: other stateful browser APIs (think pending timeouts), back-end state, the photons in the transatlantic cables carrying our API data, your user’s neural signals, and all his lifetime experience, and that tree in the forest that fell while no one was watching, all came together just for the user to click the button you’re building now. Does free will exist? Are we mere grains of sand carried by the flow of creation? Oh no, Vladimir, you’ve done it again, let’s get back on track, shall we? There are more pressing and practical matters we need to discuss today.

When to use react state

React depends on state to make your app dynamic. That is the core functionality of a front-end framework, so you’d expect an infinite variety of use cases to exist. But in fact, there are only two situations when you must use react state, and they are easy to spot.

Every dynamic value that affects your component’s DOM is react state. Fair enough, the UI should stay up-to-date. Quick example, no revelations here:

But values that have no effect on the vDOM can still belong in react state. Why? To trigger an effect:

This is not exclusive to hooks — componentDidUpdate is no different, since it’s only called when a component, you know, did update:

Believe it or not, that’s it: use react state for values that (a) are used in the JSX or (b) trigger side-effects via use*Effect or in lifecycle hooks. In all other cases, you can safely store them anywhere you want.

When not to use React state

Is there anything wrong with react state? You’d much prefer your app to update, not to stay jammed in a stale state. It’s a fine feature, but not using react state has some hard (and some soft) advantages.

First, non-react state is easier to work with. Updates to non-react state are synchronous — no need to put stuff that reads an updated value into effects or that nasty this.setState callback. You also get to utilize mutable data containers and assign them directly without immer or mobx — I know you’ve secretly missed it.

Secondly, updating a non-react state doesn’t trigger a re-render. You can see it as a footgun, or you can use it to your advantage. The lack of rendering enables very powerful performance optimizations — see hard rule of performance #1/1: doing nothing is not slower than doing something. Also, since refs are constant-reference mutable objects, you don’t have to recreate callbacks that rely on them, and can thus skip re-rendering memo-children:

Not using react state helps avoid a problem I call render thrashing — a react equivalent of layout thrashing. That’s when a state change triggers an effect that changes more state, and react must keep re-rendering until the state stabilizes. If timed correctly, ref updates are very effective at avoiding this pitfall.

Finally, react state carries more semantics, and overusing it makes your app seem more complex. State is a big deal in react. Touching state has consequences — it triggers DOM changes and funny side-effects. When changing a non-state, you just change it, and maybe later someone can read it back. Not so scary!

Now, let’s move on to some concrete examples where replacing state with a ref is useful.

Values you only need in callbacks

You don’t need react state if you only use it in callbacks — event handlers or effects. To demonstrate this, let’s build a simple swipe detector. The user puts a finger on the screen and moves it left or right. Sticking to react state, we end up with:

startX does not affect the DOM or fire any effects, we only store it to read later in a touchend. Still, you get a useless render on touchstart. Let’s try again with a ref:

Voila, Swiper now doesn’t have to re-render on touchstart. Additionally, detectSwipe now doesn’t depend on the changing startX reference, so you can useCallback(..., []) on it. Awesome!

By the way, the tradition of storing DOM nodes in a ref is a special case of this rule — it works because you only access the node in callbacks.

OK, one render is nothing for react. Let’s up the stakes by bringing in a whole rerendering barrage. Now the user can move the Swiper content around with the power of his finger:

It works, but note how touchMove updates state and makes the component re-render. touchMove event is famous for firing a lot — I ended up with 4–5 renders per frame. The user only sees the result of the last render before paint, the other 4 are wasted. requestAnimationFrame is a perfect fit for this case — we remember the swipe position in a ref, but only update the state once per frame:

Here’s an alternate take. Instead of canceling the pending RAF, we can let them all fire, but set state to the same value — only one will cause a re-render:

We’ve just implemented a custom update batching mechanism by making state and ref work together. The mutable ref acts as a staging area for pending state updates. Just like the last time, trackMove only depends on stable refs, and can be turned into a const-reference callback.

State that you want to manage yourself

When the user moves his finger, we let react determine the current offset and update the style accordingly. React may be fast, but it doesn’t know that trackMove just changes the transform, and has to do a lot of guessing — call your render, generate the vDOM, diff it, and then, a-ha, it seems like we just have to update a transform. But you know what you’re up to, and can save React all that trouble by just doing it yourself:

Voila, 0 renders! Fair warning — it’s very easy to trick yourself here, especially if several things can affect the DOM. Reserve this technique for frequent low-level stuff like animations and gestures — it can make a huge difference.

If a value always updates together with a react state item, we can piggyback on that re-render and update something else that is not react state along the way. This can be very clean — remember how I said any variable holds a state?

This can be trickier and involve a ref, but still straightforward on the outside, as useMemo — yes, it does use a ref deep inside:

In both cases, we’re using non-react state, carefully synchronizing its updates with the master state. Much better than cascading state updates:

Wow, it’s been a long post. Now we need a multi-part recap:

Not using state has some advantages:

State vs non-state is a very powerful concept that I’ll revisit in my future posts. As a homework, try thinking about how React’s only job is actually synchronizing its state to the external DOM state. Or that state-of-the-univerese thing I talked about earlier. See you soon!

Once suspended, thoughtspile will not be able to comment or publish posts until their suspension is removed.

Once unsuspended, thoughtspile will be able to comment and publish posts again.

Once unpublished, all posts by thoughtspile will become hidden and only accessible to themselves.

If thoughtspile is not suspended, they can still re-publish their posts from their dashboard.

Once unpublished, this post will become invisible to the public and only accessible to Vladimir Klepov.

Thanks for keeping DEV Community 👩‍💻👨‍💻 safe. Here is what you can do to flag thoughtspile:

Unflagging thoughtspile will restore default visibility to their posts.