If you're like me it's hard to keep track of all the videos and posts you've read about React. There's lots of information out there but, it's all over the place.

Someone would ask a question about React and I would think.

What started as a few links in a Git repo has become a fully searchable static site React FAQ here's how it happened.

It started with a question

Here's the question that started it all from @wesbos

Moving my React string refs over to functions though I don't understand why this is better. Anyone? pic.twitter.com/KoXJOvOniL

In this case I remembered a resource and responded.

I would often â™¥ï¸ these tweets as a way of bookmarking them for later reference. This seemed like a good idea but combing through thousands of "likes" etc... isn't great.

I had to find a better way to track resources that would require little effort to maintain and be easy to track.

Maybe the old trusty Readme file with some links would do the trick ... maybe others would find it helpful as well.

@timarney Oh please do! You have no idea how many emails and questions I get about this kind of stuff. Serious - would be super helpful

That was all the verification I needed.

So I started a links repo to collect resources in a simple Readme.md file. Three links total at that point.

Overtime the list grew to the point where it became hard to manage. I broke the repo into pages. That was a decent next step but still not ideal (hard to search).

Listening to JAMstack Radio got me interested in static sites. React FAQ seemed like a good place to play around with one of the static site generators. I ended up picking Gatsby. Given I had already broken the repo into pages porting things over to Gatsby was super easy. The site is mostly written in Markdown. Gatsby supports Markdown, HTML, and React.js out of the box.

For hosting Netlify was an easy choice it's free for open source. Netlify auto deploys when I push to the repo so updates are painless (just as easy as updating the original Readme).

Received an email from @Netlify ... "Weird I didn't push any changes". Noticed later there was a PR to the repo and that was the preview ðŸ”—
ðŸ˜± pic.twitter.com/uLUuNsiwHm

The final piece, and the biggest thing for me was making it searchable. I started out trying to hook up a custom Algolia search. I might circle back on this idea but given I have limited time to commit to the project this didn't work out.

Has anyone tried hooking up @gatsbyjs to @algolia?

All is well that ends well. Turns out there's a great service for that called DocSearch from Algolia. The same search that powers the React Docs. Just had to add a couple of script tags and done ðŸŽ‰. 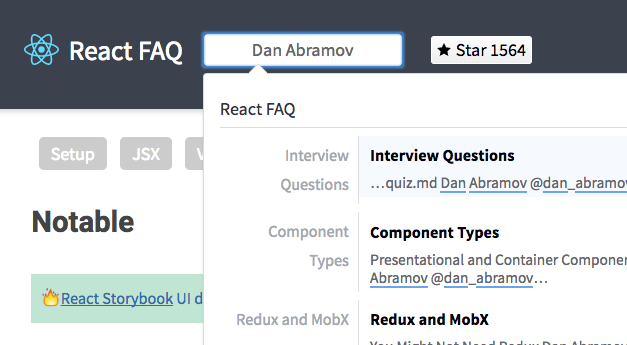 No more hunting down resources all over the place. From Readme.md to fun little side project check it out and let me know what you think.

Have something to add to the site? Pick an appropriate page add the resource and submit a PR ... would love some more contributors.

Preview File before uploading in React

tim arney
How to create a portfolio website for free?
#beginners #webdev #career #tutorial
Why doesn't useState has a dependency array?
#discuss #react
June 23rd, 2022: What did you learn this week?
#weeklyretro #weeklylearn #discuss

Once suspended, timarney_80 will not be able to comment or publish posts until their suspension is removed.

Once unsuspended, timarney_80 will be able to comment and publish posts again.

Once unpublished, all posts by timarney_80 will become hidden and only accessible to themselves.

If timarney_80 is not suspended, they can still re-publish their posts from their dashboard.